Use of Valerian to Relieve Anxiety in Patients With Cancer

The ASCO Post’s Integrative Oncology series is intended to facilitate the availability of evidence-based information on integrative and complementary therapies sometimes used by patients with cancer. Eugenie Spiguel, MSN, ANP-BC, and Jyothirmai Gubili, MS, explore the use of valerian for relieving anxiety and improving sleep in patients with cancer.

Valerian is a perennial flowering plant commonly found in Europe, Asia, and North America. Its medicinal history dates back many centuries, and it was first described by Hippocrates as a remedy for insomnia.

Valerian continues to be employed in modern times to treat nervousness, headaches, and sleeplessness. It is also used to address epilepsy, gastrointestinal spasms, and attention deficit hyperactivity disorder.

Valerian is popular in many parts of the world—in supplemental form, as an anxiety reliever, and as a sleep aid. Its powdered root is marketed as a dietary supplement in the form of capsules, tablets, and teas; the fluid extracts and tinctures are sold in both alcohol and alcohol-free bases.

Valerian demonstrated antioxidant,1 neuroprotective,2 antispasmodic,3 anxiolytic,4 anticancer,5,6 and antidepressant7 effects in preclinical studies. The potential of valerian as a sleep aid has been explored in a few studies.

In a randomized trial involving 100 postmenopausal women, 530 mg of valerian extract (taken twice a day for 4 weeks) was reported to improve the quality of sleep, compared with placebo (P < .001).8 But in a study of 119 patients undergoing active treatment for cancer, valerian (450 mg) taken orally at bedtime for 8 weeks did not improve sleep compared with placebo, as measured by Pittsburgh Sleep Quality Index scores. Researchers, however, reported improvements in secondary outcomes, which included fatigue.9 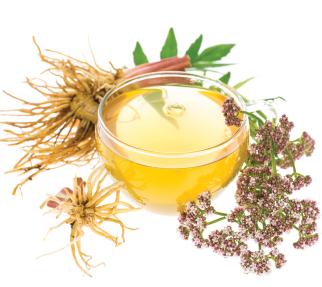 In a systematic review of 16 studies (1,093 patients), just 6 reported a statistically significant benefit in improving sleep quality with valerian, whereas the remaining trials had methodologic issues and differed considerably in dosage and treatment durations.10 Also, a meta-analysis involving 18 trials concluded that valerian may help affect subjective improvements in insomnia alone, highlighting the need for rigorous trials.11

Additional studies have reported that valerian may help mitigate vasomotor symptoms such as hot flashes in menopausal women and in treating symptoms associated with dysmenorrhea.12,13 Preliminary findings have suggested the utility of valerian products in facilitating benzodiazepine withdrawal.14 Interestingly, even though small studies suggest the positive effects of valerian against anxiety, definitive data are lacking. Literature reviews also cite insufficient evidence to draw any conclusions,15,16 so further research is needed.

Physicians should be aware of the popularity of valerian as an anxiolytic; of the adverse effects and drug interactions associated with its use; as well as of the lack of long-term safety data.

Mechanistic studies indicate that constituents in valerian bind to neurotransmitter receptors that are implicated in circadian rhythms and anxiety.17 Experiments conducted with murine models have demonstrated that the anxiolytic activity of valerian is primarily due to valerenic acid, with enhanced activity due to its interaction with gamma aminobutyric acid (GABA).18 Compounds including sesquiterpenes and valepotriates were shown to have antidepressant effects as well,7,19 evidenced by elevated norepinephrine and dopamine levels in rodents treated with a valepotriate-rich extract.19 Valerian also demonstrated antispasmodic and hypotensive effects via potassium channel activation, which may be useful for patients with gastrointestinal and cardiovascular disorders.3

Hepatotoxicity has been reported after using valerian products, with symptom resolution following cessation.21,22

Valerian was identified as a potential contributor to cases of idiopathic acute pancreatitis.23

Valerian administration to pregnant mice resulted in significant reduction in zinc levels in the fetal brain.24

Patients and their care teams need to be aware that valerian may potentially interact with some drugs via CYP450 substrates.
— Eugenie Spiguel, MSN, ANP-BC, and Jyothirmai Gubili, MS

Benzodiazepines: Valerian may have synergistic effects.26

Haloperidol: Valerian may have additive effects resulting in hepatic damage.27

Cytochrome P450 (CYP450) substrates: Valerian inhibits CYP2D628 and CYP3A429,30 and may affect the serum concentration of drugs metabolized by these enzymes.

Uridine 5′-diphosphoglucuronosyltransferase (UGT) substrates: Valerian modulates UGT enzymes in vitro and may enhance the side effects of drugs metabolized by them.31

Valerian is a popular supplement used as an anxiolytic and as a sleep aid. There is limited evidence of its effectiveness for sleep disturbance and anxiety. Patients and their care teams need to be aware that valerian may potentially interact with some drugs via CYP450 substrates. Also, abrupt cessation of its use may result in benzodiazepine-like withdrawal symptoms. Further research on valerian is needed. ■

10. Diaper A, Hindmarch I: A double-blind, placebo-controlled investigation of the effects of two doses of a valerian preparation on the sleep, cognitive and psychomotor function of sleep-disturbed older adults. Phytother Res 18:831-836, 2004.

24. Mahmoudian A, Rajaei Z, Haghir H, et al: Effects of valerian consumption during pregnancy on cortical volume and the levels of zinc and copper in the brain tissue of mouse fetus. Zhong Xi Yi Jie He Xue Bao 10:424-429, 2012.