“The remission rates observed with these combinations are encouraging, especially in this population of older, higher-risk patients,” he said. “And overall survival rates are robust, with 75% or better survival at 1 year in both ivosidenib-treated and enasidenib-treated patients.”

Mutant IDH1 or IDH2 is seen in approximately 15% to 20% of patients with AML, and these mutations are targeted by ivosidenib and enasidenib, respectively. The drugs suppress the production of the oncometabolite 2-hydroxyglutarate, leading to clinical

responses via differentiation of malignant cells. Both agents are approved for treating relapsed or refractory IDH1/2-mutated AML and are now being explored in combination with standard induction and consolidation chemotherapies.

Dr. Stein presented the results of a study evaluating the safety and tolerability of ivosidenib and enasidenib, both with cytarabine and daunorubicin, for standard induction and consolidation chemotherapies in patients with IDH1- and IDH2-mutated disease, respectively. Gail J. Roboz, MD, of Weill Cornell Medical College in New York, presented the results with ivosidenib alone in untreated AML.2

PATIENTS RECEIVED induction chemotherapy with daunorubicin at 60 mg/m2/d or idarubicin at 12 mg/m2/d 3 days and cytarabine at 200 mg/m2/d 7 days, in combination with either ivosidenib at 500 mg (n = 60) or enasidenib at 100 mg (n = 93) once daily. After induction therapy, patients could receive up to 4 cycles of consolidation therapy with mitoxantrone and etoposide plus the IDH inhibitor and then continue on maintenance therapy. Patients proceeding to allogeneic hematopoietic stem cell transplant (HSCT) discontinued treatment with the IDH inhibitor.

Almost two-thirds of patients were older than age 60. Approximately one-third had secondary AML, and of those patients, 50% had received a prior hypomethylating agent. Risk status was primarily intermediate and poor. The most common co-occurring mutations in patients with an IDH1 mutation were DNMT3A, NPM1, ASXL1, and BCOR; the most common co-occurring mutations in IDH2-mutated patients were DNMT3A, SRSF2, ASXL1, and RUNX1. All patients in both cohorts received induction doses, about half received consolidation therapy, and one-fifth went on to maintenance therapy. In patients who discontinued therapy, about 50% underwent HSCT.

With both treatments, response rates were high and durable, Dr. Stein reported. Table 1  shows the best overall responses in patients evaluable for efficacy. 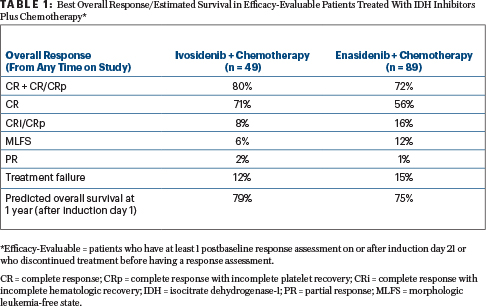 The complete response/complete response with incomplete hematologic recovery/complete response with incomplete platelet recovery rates were 91% for de novo AML and 53% for secondary AML in the ivosidenib arm and 77% and 64%, respectively, in the enasidenib arm. In patients with these strong responses, 41% demonstrated mutation clearance, and 88% tested negative for minimal residual disease when treated with ivosidenib, as did 25% and 45%, respectively, of those treated with enasidenib.

To put these response rates into context, Dr. Stein referenced a poster presented at the 2018 ASH Annual Meeting & Exposition by Mims et al, showing that induction therapy alone in patients with IDH1 and IDH2 mutations resulted in complete remission rates of 38% and 40%, respectively.3

Although a previous analysis had suggested that hematologic recovery after induction therapy seemed prolonged with enasidenib, he added, “What we’ve learned after adding more patients to the trial is that this doesn’t seem to be the case.” He said the median time to absolute neutrophil count greater than 500 μL was 28 days with ivosidenib and 34 days with enasidenib, and the time to platelet recovery greater than 50,000/μL was 28 and 30 days, respectively. In both arms, patients with secondary AML required a few more days to recover.

With a median follow-up still less than 1 year, the median overall survival is not yet estimable. However, the 1-year probability of survival after induction therapy equaled or exceeded 75%, he added.

AS FOR grade ≥ 3 adverse events of interest, IDH differentiation syndrome occurred in 3 patients in the study and QT interval prolongation occurred in 1 patient. Blood bilirubin increases were more common with enasidenib (14% vs 7%), consistent with the drug’s off-target mechanism. No patients developed leukocytosis. The 30-day mortality rate was 5% with both ivosidenib and enasidenib, and the 60-day mortality rate was 8% and 9%, respectively.

The benefit of adding ivosidenib or enasidenib to induction and consolidation therapies followed by single-agent maintenance therapy in newly diagnosed patients will be further evaluated in an upcoming randomized phase III study.

THE RESULTS for ivosdenib at 500 mg/d in untreated IDH1-mutated patients were presented by Dr. Roboz.3 In this phase I study of 34 patients, 7 patients (20.6%) had de novo AML and 27 patients (79.4%) had secondary AML. Almost all patients had intermediate-risk or poor-risk cytogenetic features.

For patients who were dependent on transfusion at baseline, transfusion independence for at least one 56-day period was achieved by 100% of patients who had a complete response/ complete hematologic response, for platelets, red blood cells, and both. Transfusion independence was not, however, limited to these responders; it was seen across response categories, said Dr. Roboz. IDH1-mutation clearance was noted in 5 of 10 patients with complete responses and in all 4 patients with complete hematologic response.

IDH differentiation syndrome was seen in 6 patients (17.6%) and was grade ≥ 3 in 3 patients (8.8%), but it did not lead to permanent treatment discontinuation. QT prolongation grade ≥ 3 was observed in 3 patients (8.8%), and 1 patient (3%) developed leukocytosis. “These events were managed using standard-of-care treatments and dose modifications as required,” she said.

Although both studies are of extreme interest, routine use of enasidenib or ivosidenib in AML should probably await better delineation of expected response rates. A trial randomly assigning patients to the newer and standard therapies would in principle be ideal. However, it might be difficult to enroll patients on the standard therapy arm, particularly if the comparison suggested here indicates ivosidenib and/or evasidenib are likely considerably superior to standard. ■

ELIHU H. ESTEY, MD, Professor of Medicine at the University of Washington and Director of Acute Myeloid Leukemia (AML) Clinical Research at the Fred Hutchinson Cancer Research Center, Seattle, added that with these “robust” ...