Many Americans believe alternative therapies alone can cure cancer as well as struggle with paying for and accessing cancer care.

Despite a recent study showing that patients with cancer who chose alternative therapies over conventional cancer treatment have a higher risk of death, nearly 4 in 10 Americans believe cancer can be cured by alternative remedies alone, according to the results of ASCO’s 2018 National Cancer Opinion Survey.1,2 This survey polled more than 4,000 Americans—1,001 with cancer—and the findings were published in October 2018.1,2 Among those who believe cancer can be cured solely by alternative means, young Americans, between the ages of 18 and 37, held this belief most strongly, with 47% agreeing that alternative therapies, without the use of standard chemotherapy, could cure cancer. In addition, 22% of cancer survivors and 38% of family caregivers believe this to be true.

“It is remarkable that nearly 40% of the U.S. population, including some cancer survivors, have this belief, especially when most alternative therapies have either never been rigorously tested or have been tested and shown to be ineffective in treating cancer,” said Richard L. Schilsky, MD, FACP, FSCT, FASCO, Senior Vice President and Chief Medical Officer of ASCO. “Data from other studies show that patients who forgo traditional cancer treatment and instead pursue alternative therapies have a two and a half times increased risk of death compared with patients who undergo conventional cancer treatment. Clearly, there is a lot of public education that needs to take place on what the real facts are regarding alternative therapies.”

As in ASCO’s 2017 survey results,3 the cost of cancer care remains a top concern among cancer survivors in 2018, with 59% saying they are very or somewhat concerned about treatment affordability, and equal numbers of survivors and their family caregivers, 69%, saying they have financial anxiety over their cancer diagnosis. And the 69% rose to 74% among caregivers responsible for paying for their loved one’s care. As for the respondents, 35% said they or another relative have had to tap into their savings to pay for cancer care; 23% had to work extra hours; 14% had to take an early withdrawal from a retirement account or college fund; 14% had to postpone retirement; 13% had to take out a second mortgage on their home or another type of loan; and 9% had to sell family heirlooms. 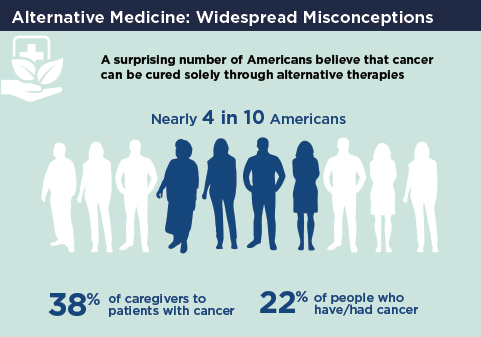 “The findings on the financial burden on patients are not new. We saw that in this past year’s ASCO survey, and there are many reports of financial toxicity in the medical and lay literature. What was surprising in this year’s survey is the financial burden patients’ caregivers are experiencing and the extreme steps they are taking to relieve that burden,” said Dr. Schilsky. “It’s creating an impossible choice for families: using resources to care for a loved one vs using those resources to ensure the stability and future success of family members.”

According to Dr. Schilsky, patients should raise any financial concerns they have about the cost of their care with their oncologists. Some of these costs may be reduced, for example, by scheduling laboratory and imaging tests at intervals allowed by their health insurance and choosing chemotherapy drugs that are less expensive—but equally or only slightly less effective—than higher priced ones.

ASCO’s Cancer Opinions Survey was established by ASCO, in collaboration with the Harris Poll, to track the U.S. public’s views on cancer research and care. ASCO believes it is critical to understand what the public, including patients, think of, expect, and need from the nation’s cancer care system. The poll, supported by the Conquer Cancer Foundation, is designed to be conducted annually to measure shifts in the public’s perceptions of a range of cancer-related issues over time.

“When oncologists explain to patients that there are different therapeutic options available to them and their cost vs value, patients might be willing to choose a therapy that is less expensive, even though it may not be quite as effective as the more expensive therapy,” said Dr. Schilsky.

(Editor’s Note: In December 2018, ASCO and the European Society for Medical Oncology [ESMO] published a joint analysis in the Journal of Clinical Oncology comparing the results of their value frameworks assessing the value-based clinical benefits of new treatments.4The ASCO Post will publish an update on ASCO’s Value Framework Net Health Benefit Score and the ESMO-Magnitude of Clinical Benefit Scale in an upcoming issue.)

40% of rural Americans say there are not enough physicians specializing in cancer care near their home.
—

The lack of oncologists practicing in rural communities has been a workforce trend tracked by ASCO for several years. According to research by ASCO published in its report The State of Oncology Practice in America, 2018: Results of the ASCO Practice Census Survey, although 19% of the U.S. population resides in rural areas of the country, just 7% of oncologists practice in these areas.5

“ASCO is studying the workforce issues confronting oncology practices in rural settings to delve more deeply into the scope of the problem and determine some potential solutions,” Dr. Schilsky said. “We know it will be necessary to provide support to oncologists in rural communities because cancer requires multidisciplinary care teams to treat it effectively. In some communities, access to experienced pathologists, radiologists, surgical oncologists, or other oncology specialists is lacking, and we need to figure out how to solve the problem.”

“This is no different from any other aspect of cancer care,” Dr. Schilsky said. “We want to see the evidence generated to support any particular type of intervention, whether it is related directly to cancer treatment or supportive care.”

What was surprising in this year’s survey is the financial burden patients’ caregivers are experiencing and the extreme steps they are taking to relieve that burden.
— Richard L. Schilsky, MD, FACP, FSCT, FASCO

Although there is abundant research showing that prescription opioids are effective in managing cancer-related pain, the exploding epidemic of opioid abuse and opioid-related deaths in the United States has led to legal restrictions of opioid prescriptions, resulting in reduced access to opioid medications, even for patients with cancer. In ASCO’s 2018 Cancer Opinions Survey, although most Americans, 74%, agreed that any new rules and regulations that curtail access to prescription opioids to reduce abuse should not apply to patients with cancer and that the benefits of using opioid medications to manage cancer-related pain supersede the risks of potential addiction, 40% of patients with cancer who have used opioids in the past year reported having trouble accessing them.

“We are sensitive to the fact that there is a huge opioid epidemic in this country, and ASCO is all for responsible prescribing of opioid medications. However, our patient population has a unique form of pain that is often best treated with opioid medications. Cancer-related pain is unlike any other pain people experience; it is a deep, visceral pain that often cannot be treated effectively with anything but opioids,” Dr. Schilsky explained. “This is an enormous quality-of-life issue for patients, and we want to ensure their access to these medications. We also do not want it to be even more difficult for physicians to prescribe opioids to patients with cancer. Our general view, which is supported by the views of the respondents in our survey, is that patients with cancer should be excluded from any restrictions of opioid prescribing.”

Our survey results give us a very rich source of information we can use in our advocacy work on Capitol Hill.
— Richard L. Schilsky, MD, FACP, FSCT, FASCO

ASCO’s Clinical Practice Guideline for the management of chronic pain in adult cancer survivors calls for the careful assessment at each office visit of the level of pain patients are experiencing and its effect on their function. In addition, patients should be screened for risk factors for addiction.7

Once again, this year, an overwhelming majority of respondents, 88%, said it is important for the government to dedicate substantial funding for research to develop more effective ways to prevent, diagnose, and treat cancer, with more than half saying the government spends too little on cancer research. Despite party affiliation, most Americans also want the government to take action to reduce the cost of cancer care, including allowing Medicare to directly negotiate prescription drug prices with drug manufacturers; regulating the price of 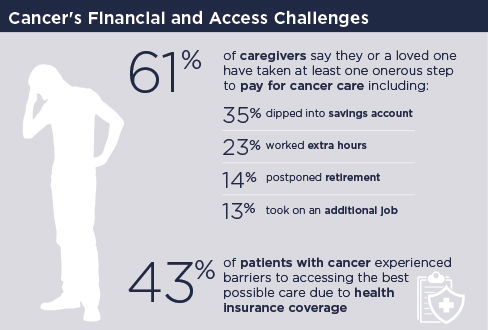 cancer drugs to reduce their cost; quickening the pace of approvals of generic versions of cancer drugs by the U.S. Food and Drug Administration; and allowing the purchase of cancer drugs from pharmacies outside of the United States.

According to Dr. Schilsky, the results from ASCO’s Cancer Opinions Survey provide important data for ASCO to use to advocate for increased federal funding for cancer research, greater health-care access for patients, value in cancer care, and payment reform. “Our survey results give us a very rich source of information we can use in our advocacy work on Capitol Hill. They represent not just what is important for oncologists in the care of our patients, but they directly express the views of the general public regarding what Congress should be doing to reduce the cost of cancer care and improve patient outcomes. That can bolster our advocacy for policy changes on the federal level,” Dr. Schilsky said. ■