ROBERT W. DAY, MD, the longest-serving President and Director of Fred Hutchinson Cancer Research Center and the leader who brought into being its campus overlooking Seattle’s South Lake Union, died in his Seattle home on January 6, 2018 of lung cancer. He was 87.

“It is a tragic loss for all of us,” said Fred Hutch President and Director Gary Gilliland, MD. “He was a wonderful friend and mentor to so many of us—I personally will be forever grateful to Bob for taking me under his wing when I started here 3 years ago. 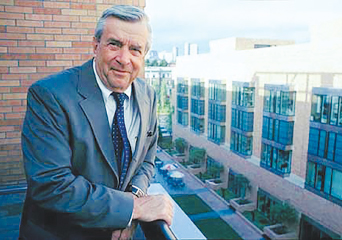 A well-read man who exuded charm and wit, Dr. Day was also a competitive and uncompromising advocate, determined to fulfill his vision of the Hutch—that of a growing, thriving center of excellence for basic science, clinical trials, and public health and prevention research.

FROM 1981 UNTIL 1997, Dr. Day presided over the Hutch during a period when Dr. E. Donnall Thomas’ pioneering bone marrow transplant research drew increasing international attention and earned Dr. Thomas the 1990 Nobel Prize in physiology or medicine. Under Dr. Day’s leadership, Fred Hutch established its long-standing position as the top recipient of research grant dollars from the National Cancer Institute.

But Dr. Day’s signature achievement was acquisition of the 15- acre site in South Lake Union in a series of transactions from 1988 through 1991 and the subsequent move from the Hutch’s original headquarters on First Hill in Seattle to a 13-building complex now known as the Robert W. Day Campus. A bronze bust of Dr. Day gazes across a brick plaza at the center of that campus.

With most of the key properties lined up, the Hutch board of trustees approved the plan in October 1989. That move, controversial both within and without the confines of Fred Hutch in the 1990s, is now widely regarded as a masterstroke. Dr. Gilliland called it “one of the most important and momentous decisions in the history of the Hutch.”

A Lifelong Lover of Books

DR. DAY was an enthusiastic tennis player, skier, and angler, but his real passion was for books.

Growing up outside Boston in Framingham, Massachusetts, he was drawn to the local library, inspired by an older sister who became a scholar and librarian. He later found a refuge as a Harvard student in the undergraduate library there. “It was just wonderful, and I spent hours at the place,” he told a friend. “It was my education, really.”

Dr. Day left Harvard early, transferring directly to the University of Chicago Medical School, attracted in part to the educational philosophy of the university’s president, Robert Maynard Hutchins, who was a proponent of teaching the Great Books of the Western World as a core of a liberal arts curriculum. As a student, Dr. Day attended small, informal dinners at the university with the likes of physicist Enrico Fermi and economist Milton Friedman. He graduated in 1956 with an MD degree and an intense interest in public health.

HIS ACADEMIC TRAINING and early career in public health forged a commitment that would later shape the Hutch as a leader in the field. Before coming to Seattle in 1969, he was already a rising young star, serving as Chief Deputy Director of the California Department of Public Health under the administration of then Governor Ronald Reagan. There he drafted the first regulations for MediCal, the state’s health care system for the poor under the federal Medicaid program.

Dr. Day then spent nearly a decade as Dean and Professor at the University of Washington (UW) School of Public Health. He was serving as a UW representative on the board of Fred Hutchinson Cancer Research Center when founder Dr. William Hutchinson reached out in 1981 and asked him to run the center.

Dr. Day was the first to succeed the iconic Hutchinson as President and Director. As Fred Hutch’s president, Dr. Day quickly set about creating his own administrative infrastructure, making his mark with a disciplined hand and a strategic outlook. Facing competition for that talent from new biotechnology companies, and convinced that the Hutch had no room to grow on First Hill, Day soon began looking to consolidate all Hutch operations, which were spreading to downtown Seattle.

Dr. Mark Groudine, a molecular biologist at Fred Hutch since 1979 and a special adviser to the Director’s Office, likens Dr. Day to an architect who shaped the organizational structure of the Hutch, which remains in place to this day. That architectural vision also informed his push for a single campus. “Bob was steadfast in his vision to have a unified campus that could house all our investigators and staff,” he said.

IN THE FINAL YEARS of his presidency, as the phased construction of the new campus was under way, Dr. Day oversaw the complex negotiations with the University of Washington and Seattle Children’s Hospital that led to the creation of Seattle Cancer Care Alliance, the clinical care partner of Fred Hutch.

After passing the reins in 1997 to Fred Hutch geneticist—and future Nobel laureate—Dr. Lee Hartwell, Dr. Day remained on the faculty, continuing to conduct his own research. Notably, he led ongoing studies of the impact of the Chernobyl nuclear power plant disaster on childhood leukemia. He was appointed Scientific Director of the International Consortium for Research on the Health Effects of Radiation, a study funded by the U.S. Navy to examine the effects of the disaster, which reported its results in 2004. He also became involved in business, cofounding Orca Biosciences, a developer of diagnostic blood tests for early detection of cancer, which merged with the German firm Epigenetics AG in 1999.

In 2005, Day and his wife, C.J. Taylor-Day, founded the Science and Management of Addictions Foundation, with a mission to eliminate the disease of substance addiction in youth by advancing research education and treatment. C.J. died in 2011 after an 8-year battle with ovarian cancer. Dr. Day remained Chair of the Seattle nonprofit until his passing.

He is survived by the couple’s two daughters; and also by his first wife, Jane Day, and their daughter and son; and two grandchildren. ■