Our daughter Emily was the first child to be treated with CAR T-cell therapy. It saved her life, and now we are on a mission to save the lives of other children with cancer.

The days leading up to our daughter Emily’s diagnosis of acute lymphoblastic leukemia (ALL) on May 28, 2010, when she was just 5, offered few clues about the terrifying, life-and-death months and years we were about to experience. She was happy and seemingly healthy, literally until the day before her diagnosis, when the first signs something might be wrong were the occasional gum bleeding she experienced after brushing her teeth and the bruising on her body, which my wife, Kari, and I attributed to roughhousing with her cousins. In retrospect, there were other symptoms that should have been red flags, such as the dried blood I noticed around Emily’s nostrils. I just wasn’t expecting—and couldn’t fathom—that our little girl was facing a life-threatening cancer and would soon be in the fight of her life. 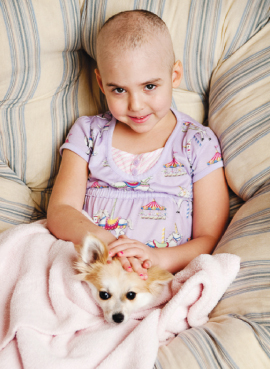 Emily Whitehead just months after being diagnosed with ALL.

It wasn’t until Emily awoke crying and complaining about excruciating pain in her legs that Kari and I became worried that something was seriously wrong. A few hours later, we learned that Emily had ALL. From that moment on, Kari and I vowed never to let Emily see fear in our eyes, but it was a hard vow to keep. When I told Emily she had cancer and the treatment would be tough, I also assured her she would beat this disease and be a hero to others facing cancer. I had no idea how prophetic my words would turn out to be.

EMILY’S ONCOLOGIST said her chances of being cured of ALL after receiving the standard treatment protocol were between 85% and 90%, and we just concentrated on those odds and looked forward. The first crisis came soon after Emily started therapy, when she developed necrotizing fasciitis in her left thigh and right calf. We were confronted with the first of many harrowing medical decisions we would have to make over the next 2 years.

Emily’s surgeon told us that in order to save her life, her legs would have to be amputated. “Right now,” warned the surgeon, “cancer is not your biggest problem. It is the infection.” I signed the consent forms and worried that for the rest of her life, Emily would hate me for taking away her legs. Fortunately, the infection had settled around the leg muscles and not in the muscles, so the surgeons were able to remove the infection and leave Emily’s legs intact, and we soon resumed treatment for her ALL.

“During our cancer journey, we never felt alone. All of Emily’s oncologists and all members of her medical teams gave us their time, expertise, and love, and we are grateful to them.”
— Tom Whitehead

Initially, the chemotherapy did its job, putting Emily in remission for 16 months. But in October 2011, we learned the cancer had recurred and were told the next course of action would be an allogeneic stem cell transplant, which was scheduled for February 2012. However, just weeks before the transplant date, Emily relapsed again—this time during her second course of chemotherapy. Her cancer was so aggressive, our oncologist suggested we try a round of a combination chemotherapy regimen that included ifosfamide, carboplatin, and etoposide. Worried the treatment would destroy Emily’s kidneys, we decided against it and looked to buy some time while we investigated other potential therapies. Our oncologist cautioned—and we instinctively knew—that chemotherapy was unlikely to be successful in treating Emily’s cancer. If we were going to save her life, we would have to investigate less conventional treatment.

KARI AND I learned about an experimental clinical study of the chimeric antigen receptor (CAR) T-cell therapy CTL019 underway at Children’s Hospital of Philadelphia (CHOP). After discussions with Stephan Grupp, MD, PhD, Director of the Cancer Immunotherapy Program and Director of Translational Research for the Center for Childhood Cancer Research at Children’s Hospital and lead investigator of the CAR T-cell study at CHOP, we decided to enroll Emily into the trial. On April 17, 2012, she became the first pediatric patient to be treated with CAR T-cell therapy.

During this time, even though Emily remained precariously ill, my faith that she would have a complete recovery never wavered. I had no way of knowing how severely that faith would be tested. We were all afraid but decided to fight as hard as we could every day, so we would be there to fight again tomorrow.

“Although we were told Emily would likely experience cytokine-release syndrome after being infused with her reengineered T cells, we weren’t prepared for the swift onset of her near-fatal symptoms.”
— Tom Whitehead

I told Emily we would do everything it takes to cure her. “If I have to crawl to the North Pole to find a cure, that’s what I’ll do,” I promised her.

ALTHOUGH WE were told Emily would likely experience cytokine-release syndrome after being infused with her reengineered T cells, we weren’t prepared for the swift onset of her near-fatal symptoms, including fluid buildup in her lungs, high fevers, and plummeting blood pressure. Her condition was so tenuous, she had to be put into an induced coma and placed on a ventilator so her medical team could figure out how to treat her. It was the first time since her cancer diagnosis that Emily was so close to dying. “There is a 1 in 1,000 chance your daughter will be alive in the morning,” said one of her doctors. “Kids just can’t survive this kind of assault on their body.”

“Please keep trying to help her,” I said. “I can’t explain it, but I know she is going to survive this.” 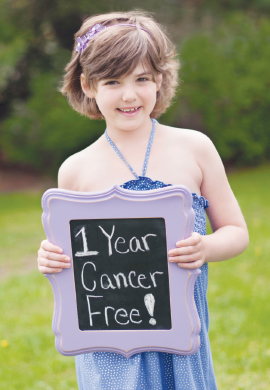 The next morning, Dr. Grupp came by and said he had been in his lab working throughout the night and discovered a surge of the protein interleukin 6 was causing Emily’s immune system to revolt. After discussing Emily’s condition with Carl June, MD, Richard W. Vague Professor in Immunotherapy, Perelman School of Medicine at the University of Pennsylvania, a leader in the development of cellular immunotherapy, Dr. June suggested giving Emily tocilizumab (Actemra), an immunosuppressive drug used mainly in the treatment of rheumatoid arthritis. Within hours, Emily was dramatically better, and a week later, she awoke from her coma—ironically on her seventh birthday. A few days later, a bone marrow biopsy showed that Emily’s cancer was gone. She has remained cancer-free for 5 years.

JULY 12, 2017, was one of the most inspirational days of my life. That day, I testified before members of the Oncologic Drugs Advisory Committee (ODAC) during a meeting to discuss a license application for tisagenlecleucel (CTL019 [Kymriah]), which, if approved by the FDA, would become the first immunocellular therapy for children and young adults with relapsed or refractory B-cell ALL. 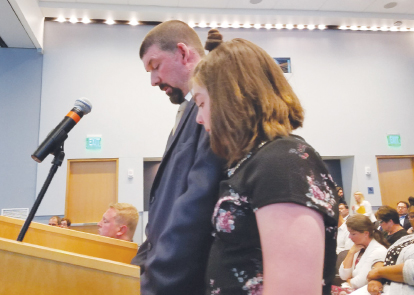 Tom Whitehead, with Emily by his side, testifies before the Oncologic Drugs Advisory Committee on July 12, 2017, to advocate for approval of tisagenlecleucel, which was approved by the U.S. Food and Drug Administration on August 30, 2017.

A lot was riding on my testimony, and I felt I had to deliver my best speech yet. I desperately wanted this drug approved so it could save other young lives. The night before my speech, I had asked Emily if she wanted to join me at the podium while I told our story, but she said she wasn’t comfortable being before an audience and declined. As I started my speech, Emily walked up to me and held my arm. Her gesture of support was so overwhelming, I started to cry but eventually finished what I wanted to say to the committee.

Immediately after my speech, the members of ODAC voted unanimously to approve tisagenlecleucel, and on August 30, 2017, the treatment received FDA approval. Later, Scott Gottlieb, MD, Commissioner of the FDA, told me my family’s advocacy and testimony helped speed its FDA approval. It was a truly humbling experience.

TODAY, EMILY is once again a happy young girl, enjoying life like other healthy 12-year-olds. Recently, I asked Dr. Grupp if he thought Emily is cured of her cancer, and he said by every medical measure she is cured. He also cautioned that she is patient one on this treatment, and while she is writing the history of the success of CAR T-cell therapy, “we can never know what tomorrow will bring.” And I’m satisfied with that answer.

Whatever the future holds for us, we are prepared to face it with courage and perseverance. Our experience has not only brought us closer together as a family, it has made us determined to give back to the oncology community that has given so much to us. We have launched the Emily Whitehead Foundation (http://emilywhiteheadfoundation.org) to raise awareness of childhood cancers and funding for innovative childhood cancer therapies that are less toxic, better targeted, and more effective. We also provide emotional support and guidance for families going through a similar experience.

During our cancer journey, we never felt alone. All of Emily’s oncologists and all members of her medical teams gave us their time, expertise, and love, and we are grateful to them. We are also grateful to all the researchers who are working hard to develop better treatments for children with cancer.

Although, of course, we would not have chosen to have this cancer experience, Kari, Emily, and I feel like we were put on this path for a reason and are determined not to squander this gift. We will continue to work every day to help other children diagnosed with cancer so, like Emily, they, too, can have the same chance at a long and healthy life. ■