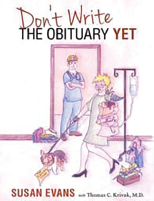 Title: Don’t Write the Obituary Yet

Ovarian cancer, the deadliest of gynecologic cancers, is usually diagnosed after the disease has spread. Susan Evans was a secondary English and remedial reading teacher for 32 years in Bradford, Pennsylvania. She was on several advisory boards and was recognized by the Pennsylvania Senate and Senator Joseph Scarnati with a special citation for her instructional devotion. Life was good until a hot night on June 13, 2012, when Ms. Evans was diagnosed with ovarian cancer.

“There I was, looking at an ER computer screen showing the results of my CT scan. I had gone in to the doctor’s earlier that day with a swollen ankle, and a few hours later I was told that I had what looked like a 25-pound tumor.... That’s the size of a Thanksgiving turkey or my sheltie,” writes Ms. Evans in the opening chapter of her new book, Don’t Write the Obituary Yet, written with Thomas C. Krivac, MD, a gynecologic oncologist practicing in Pittsburgh.

Every book, from desert-dry scholarly works to hyperactive romance novels, has a voice, which is the individual writing style of an author—a combination of common usage of syntax, diction, punctuation, character development, and dialogue. Ms. Evans employs a first-person jocular, semi-ironic voice in her ovarian cancer survivor tale. It is not an uncommon device in survivorship tales, largely because humor and irony are needed defense mechanisms for people facing life-threatening disease. Ironic humor, however, has its pitfalls. If overused or mistimed, it can sound ham-handed and silly.

Ms. Evans usually avoids trouble here, largely because of her honest and upbeat messaging and in her ability to talk directly to the reader. For instance: “I was warned that the steroids would make me jumpy and that I probably would not sleep the night before a chemo treatment. Good. One more inconvenience on my way to recovery!”

Ms. Evans is at her best when describing, blow by blow, the anticipation of cancer treatments and their aftermath, which is demonstrated in a postsurgical drama when Ms. Evans demands that her Foley catheter be removed. Her nurses argue that the catheter should remain in place, to which Ms. Evans replies: “Ladies. I have the right to refuse treatment and that is what I am doing right now. Remove the catheter.” This discussion escalates. The stern doctor enters the stage, admonishing Ms. Evans for abusing his nurses. But Ms. Evans, a once teary, highly vulnerable cancer patient, has matured into her own caregiver and doesn’t budge. This is a valuable lesson for all patients with cancer.

Ms. Evans is at her best when describing, blow by blow, the anticipation of cancer treatments and their aftermath.
—

One of the more touching episodes is when Ms. Evans, battling the inner loneliness that ebbs and flows within all patients with cancer, suffers an emotional blow. Her beloved sheltie disappears in the woods behind her home. Weeks of desperate searching come up empty. She’d given up hope, when 67 days later, a stranger found and returned her dog. It serves as good emotional ballast to her book, which at times, reads like a diary.

Survival of the Body and Spirit

Don’t Write the Obituary Yet begins with Ms. Evans’ cancer diagnosis and sums up after a year and a half of cancer treatments, including surgery and 15 rounds of bevacizumab (Avastin). It is a story of survival not only of the body but also the spirit. Except for a couple of incidents, her caregivers appeared to be sound and compassionate professionals. “I want things done. The ‘to-do list is always in my hand, and I get annoyed when anyone or anything slows me down,” Ms. Evans writes toward the end of her engaging story.

Don’t Write the Obituary Yet is too short on science and treatments to be recommended for readers of The ASCO Post. However, it is a solid recommendation for their patients. ■