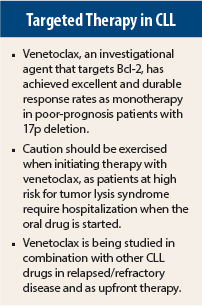 In this pivotal multicenter phase II study of venetoclax monotherapy, we saw deep responses and acceptable toxicity in a relapsed/refractory population.

Venetoclax, the latest entry into the field of treatment of chronic lymphocytic leukemia (CLL), is a powerful investigational therapy that promises to fill an important niche: treatment of high-risk relapsed/refractory patients with deletions of 17p. Nearly 80% of patients with relapsed/refractory CLL characterized by 17p deletions achieved response to venetoclax monotherapy, and responses appear to be durable, according to the results of a late-breaking phase II study presented at the 57th American Society of Hematology (ASH) Annual Meeting and Exposition.1

Deletions of 17p are associated with poor treatment outcomes. Venetoclax has received Breakthrough Designation status from the U.S. Food and Drug Administration (FDA) for patients with relapsed/refractory CLL and the 17p deletion.

Venetoclax is an oral, small molecule inhibitor of Bcl-2, a protein that promotes cell survival and is overexpressed in CLL. This agent unleashes such powerful antitumor activity that tumor lysis syndrome is a major concern, which has led investigators to use a cautious dosing schedule for this new drug, starting at very low doses and ramping up to a target dose slowly.

“In this pivotal multicenter phase II study of venetoclax monotherapy, we saw deep responses and acceptable toxicity in a relapsed/refractory population. We saw investigator-confirmed complete response of 7.5% and nodular partial response of 2.8%, with minimal disease negativity in greater than 20%,” said presenting author Stephan ­Stilgenbauer, MD, of the University of Ulm, Germany.

The pivotal study enrolled 107 patients with relapsed/refractory CLL who had 17p deletions confirmed by a central laboratory. These patients typically have a median progression-free survival with front-line chemotherapy of less than 12 months, he said.

Due to concerns about tumor lysis syndrome that emerged in preliminary studies, venetoclax was given in a stepped-up dosing schedule, starting with 20 mg/d and ramped up weekly to the target dose of 400 mg by week 4.

Median age was 67; 65% were male; median number of prior therapies was two; about 50% had previous bendamustine (Treanda) at relapse. About 42% were considered to be at high risk for tumor lysis syndrome.

Of 87 patients with baseline lymphocytosis, the absolute lymphocyte count did not normalize in only 4 patients. Median time to normalization on the drug was 22 days.

Venetoclax is being studied in combination with other drugs in CLL. At the ASH Annual Meeting, two different phase Ib studies showed that venetoclax could be safely and effectively combined with obinutuzumab, rituximab, and bendamustine/rituximab. Another phase 1b study looked at venetoclax monotherapy in patients refractory to ibrutinib or idelalisib. The phase III MURANO trial of venetoclax in combination with rituximab vs rituximab plus bendamustine in a broader relapsed CLL population is underway.

Kanti Rai, MD, a pioneer in the staging and treatment of CLL who practices at Northwell Health System, New Hyde Park, New York, commented on Dr. Stilgenbauer’s presentation. “Although this is welcome news about venetoclax, you have not mentioned the fact that the introduction of this drug deserves a very careful entry. You did mention ramp-up dosing, but you did not mention that patients have to be admitted to the hospital for safety with this oral agent,” he stated.

“Tumor lysis syndrome was effectively eliminated in this trial. Nonetheless oncologists and pharmacists who will use this drug in the future ought to know that the start requires hospitalization and frequent monitoring in the first 24 to 48 hours,” Dr. Rai said.

“This is a very important point,” Dr. ­Stilgenbauer replied. “The initiation of venetoclax has to be handled with care. The ramp-up dosing has to be managed cautiously. Based on our management strategy, the current scheme requires hospitalization only for high-risk patients, but they need to be treated with allopurinol and have laboratory monitoring. Efficacy comes at a price, and vigilance is required.” ■

In a separate interview, Kanti Rai, MD, of the Northwell Health System in New Hyde Park, New York, noted that venetoclax is one of several “exciting recent developments in this disease.” There is the Bruton tyrosine kinase inhibitor ibrutinib (Imbruvica), the PI3K inhibitor idelalisib (Zydelig),...