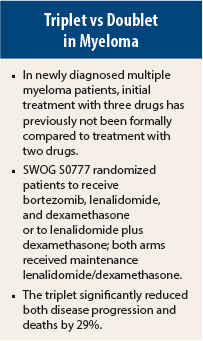 Triplet vs Doublet in Myeloma

Triplets should be the standard of care in most newly diagnosed multiple myeloma patients, according to a study that validated a practice that has become common in the United States, though not necessarily elsewhere. The use of three drugs led to significant reductions in disease progression and death—by about 29%—in the phase III SWOG S0777 trial, as reported at the 2015 American Society of Hematology (ASH) Annual Meeting and Exposition by Brian G.M. Durie, MD, Chairman of the International Myeloma Foundation and an attending physician at Cedars-Sinai Comprehensive Cancer Center, Los Angeles.1

In the multivariate age-adjusted analysis, the one factor that positively affected progression-free and overall survival were treatment with bortezomib/lenalidomide/low-dose dexamethasone, whereas factors negatively associated with outcomes included stage III disease (HR = 1.58 and 2.16, respectively) and age ≥ 65 (HR = 1.32 and 1.88, respectively). Dr. Durie noted that mutation data had not been fully analyzed.

“Both regimens are safe but with significantly greater grade 3 neuropathic and gastrointestinal adverse events with [the triplet],” Dr. Durie reported.

Adverse events ≥ grade 3 possibly related to treatment were significantly more common in the bortezomib/lenalidomide/dexamethasone arm, including neurologic events (33% vs 11%), pain (12% vs 4%), sensory toxicity (23% vs 3%), and gastrointestinal side effects (22% vs 8%), “but bortezomib was administered intravenously twice a week, as was the practice in 2008,” he noted. Subcutaneous administration or less frequent dosing, as is typically done now, might have ameliorated some of these side effects, he suggested.

At a median follow-up of 55 months, secondary primary malignancies were reported in only 4% of each study arm. ■

Disclosure: Dr. Durie has been a consultant for Johnson & Johnson, Takeda, Onyx, and Celgene.