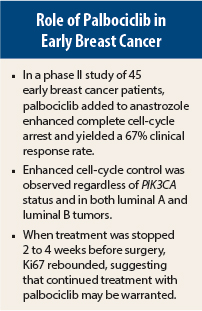 Palbociclib enhanced cell-cycle control regardless of PIK3CA mutation status or luminal A or B status of these hormone receptor–positive, HER2-negative breast cancer patients.

The cyclin-dependent kinase (CDK) 4/6  inhibitor palbociclib (Ibrance) enhanced cell-cycle control over that achieved with anastrozole alone in a study that evaluated the drugs’ ability to induce complete cell-cycle arrest in tumor cells and to produce clinical responses, as neoadjuvant therapy for breast cancer.1

The study was met with interest at the 2015 San Antonio Breast Cancer Symposium, where Dr. Ma presented the study findings.  A number of breast cancer experts applauded the design, which looked for both biologic and clinical effects of the CDK4/6 inhibitor as a companion to endocrine therapy before surgery. (A complete list of study investigators is included in reference 1.)

Rationale for the Study

CDK4 and CDK6, together with cyclin D, promote G1-to-S phase transition by phosphorylating the retinoblastoma protein, which releases the E2F transcription factor and activates downstream target genes. CDK4/6 is particularly activated in estrogen receptor–positive breast cancer via the estrogen receptor, along with other oncogenic signaling pathways, Dr. Ma explained.

Palbociclib is an oral CDK4/6 inhibitor active in the metastatic setting in combination with an aromatase inhibitor or fulvestrant (Faslodex). Adjuvant trials of the drug are underway.

Dr. Ma reported the results of a phase II study of patients with clinical stage II/III estrogen receptor–positive, HER2-negative breast cancer. The study’s hypothesis was that the addition of palbociclib to anastrozole as neoadjuvant therapy would enhance complete cell-cycle arrest, the study’s primary endpoint. Complete cell-cycle arrest was defined as a proportion of tumor cells positive for Ki67 ≤ 2.7% on cycle 1, day 15 after 2 weeks of treatment with both drugs.

“This endpoint was chosen because of previous findings that increasing levels of Ki67 on neoadjuvant endocrine therapy was associated with increased risks of relapse long-term,” she said. “The hypothesis is that palbociclib would result in at least 50% improvement in the [complete cell-cycle arrest] rate, over that achieved by the aromatase inhibitor alone.”

Fifty patients were started on anastrozole alone for the first 28-day cycle. Palbociclib at 125 mg/d was added for four additional cycles before surgery, which was performed 2 to 4 weeks after the drugs were stopped (ie, the washout period). Premenopausal patients also received goserelin (Zoladex).

Serial biopsies were taken at baseline and at several points during treatment. The final 10 patients received 10 to 12 days of palbociclib therapy (ie, did not undergo washout), to assess the effect of continued treatment before surgery.

“These serial specimens allowed us to assess the biologic effect of anastrozole alone and then the effect of adding palbociclib,” she said.

Among the 45 evaluable patients, complete cell-cycle arrest at cycle 1, day 15 was achieved in 39 (87%), which exceeded the investigators’ expectation of 66%.  Complete cell-cycle arrest was seen in both patients with PIK3CA wild-type disease and those with PIK3CA-mutated disease. Ki67 analysis on serial biopsies clearly demonstrated an enhanced cell-cycle control by the addition of palbociclib to anastrozole alone.

Patients tended to have a rebound in Ki67 level in the washout period; however, this increase was not observed in patients who continued palbociclib. This rebound, she said, “indicates that palbociclib, like endocrine therapy, may need to be a maintenance treatment.”

The findings support the evaluation of this combination for the adjuvant treatment of estrogen receptor–positive, HER2-positive breast cancer, Dr. Ma said.  The observation of complete cell-cycle arrest, vs no complete cell-cycle arrest, might someday help identify patients who would be sufficiently treated with endocrine therapy alone, she added.

“The study provides three important pieces of information. One, it suggests that palbociclib can add to the benefit...