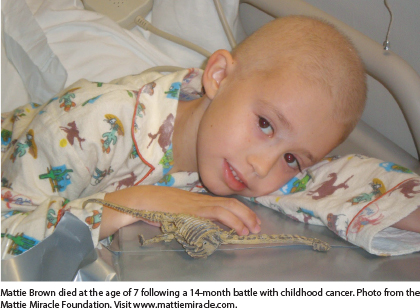 Mattie Brown died at the age of 7 following a 14-month battle with childhood cancer. Photo from the Mattie Miracle Foundation. Visit www.mattiemiracle.com.

The American Psychosocial Oncology Society (APOS) has endorsed the “Psychosocial Standards of Care for Children With Cancer and Their Families,” which were published in a December 2015 special supplement of Pediatric Blood & Cancer.

The scientific, evidence-based psychosocial standards define the psychosocial care that all children with cancer and their families should receive. More than 60 clinicians and researchers from the United States, Canada, and the Netherlands developed the standards over 3 years following rigorous research and academic requirements and processes.

The Mattie Miracle Cancer Foundation spearheaded the effort to create and implement Standards of Care to ensure patients and families have access to a minimum level of psychosocial care from the time of diagnosis, through survivorship or end-of-life and bereavement care. “We are proud that APOS collaborated with us on the development of the Standards. Having lost our only child to cancer, we know there is a medical standard of care for children, but there were no national psychosocial standards to guide cancer treatment,” said Victoria Sardi-Brown and Peter Brown, Co-Founders of The Mattie Miracle Cancer Foundation and parents of Mattie Brown, who lost his life to a 14-month battle with childhood cancer on September 8, 2009.

Lori Wiener, PhD, DCSW, Co-Director of the Pediatric Oncology Branch at the National Cancer Institute, federal liaison to the APOS Board of Directors, and APOS Fellow, was instrumental in developing the pediatric psychosocial standards. Dr. Wiener stated, “These standards were developed, in large part, during APOS annual conferences from 2012–2015, when leaders in the field came together in separate think tanks to address current knowledge, needs, and how to strategically develop evidence-based standards of care pertaining to pediatric psychosocial data.” Dr. Wiener praised Paul Jacobsen,
PhD, FAPOS, of H. Lee Moffitt Cancer Center, for his guidance prior to and during each think tank.

The development of the Psychosocial Standards of Care is a major step forward in addressing the needs of children with cancer and their families. The integration of psychosocial care along with disease-directed treatment improves the quality of life across the cancer trajectory. Depression and other psychosocial concerns can affect adherence to treatment regimens and decrease coping abilities. Therefore, making psychosocial care part of standard treatment maximizes positive treatment outcomes.

The Mattie Miracle Cancer Foundation and the team of pediatric oncology experts will work to encourage the rapid adoption of the Standards in clinical sites throughout the country. Learn more at www.mattiemiracle.com.

The Pediatric Blood & Cancer special supplement can be viewed at http://onlinelibrary.wiley.com/doi/10.1002/pbc.v62.S5/issuetoc. To learn more about the Mattie Miracle Foundation, visit www.mattiemiracle.com ■