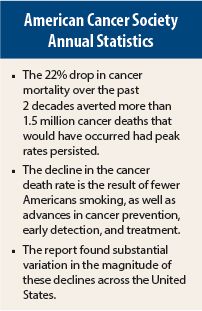 The continuing drops we’re seeing in cancer mortality are reason to celebrate, but not to stop [research].

The American Cancer Society’s annual cancer statistics report found that a 22% drop in cancer mortality over 2 ­decades led to the avoidance of more than 1.5 million cancer deaths that would have occurred if peak rates had persisted. And while cancer death rates have declined in every state, the report found substantial variation in the magnitude of these declines, generally with the states in the South showing the smallest decline and in the Northeast the largest decline.

Each year, the American Cancer Society compiles the most recent data on cancer incidence, mortality, and survival based on incidence data from the National Cancer Institute and the Centers for Disease Control and Prevention and mortality data from the National Center for Health Statistics. The data will be disseminated in two reports: Cancer Statistics 2015, to be published in CA: A Cancer Journal for Clinicians,1 and Cancer Facts & Figures 2015.2 The reports also estimate the number of new cancer cases and deaths expected in the United States in the current year.

Largely driven by rapid increases in lung cancer deaths among men as a consequence of the tobacco epidemic, the overall cancer death rate rose during most of the 20th century, peaking in 1991. The subsequent, steady decline in the cancer death rate is the result of fewer Americans smoking, as well as advances in cancer prevention, early detection, and treatment.

During the most recent 5 years for which data are available (2007–2011), the average annual decline in cancer mortality was slightly larger among men (1.8%) than women (1.4%). These declines are driven by continued decreases in death rates for the four major cancer sites: lung, breast, prostate, and colon.

Death rates for breast cancer (among women) are down more than one-third (35%) from peak rates, while prostate and colorectal cancer death rates are each down by nearly half (47%).

The magnitude of the decline in overall cancer mortality between 1991 and 2011 varied by state. The smallest declines were generally in the South, where drops were about 15%. They were largest in the Northeast, where there were declines of 25% to 30% in Maryland, New Jersey, Massachusetts, New York, and Delaware. As a result, a total of 29,000 cancer deaths were averted in 2011 in these states.

Estimates for the Current Year

Prostate, lung, and colorectal cancers will account for about one-half of all cases in men, with prostate cancer alone accounting for about one-quarter of new diagnoses.

The three most commonly diagnosed types of cancer among women in 2015 will be breast, lung, and colorectal cancers, accounting for one-half of all cases in women. Breast cancer alone is expected to account for 29% of all new cancers among women in the United States.

The report estimates that 589,430 Americans will die from cancer this year, corresponding to about 1,600 deaths per day.

During the past 5 years for which there are data (2007–2011), the overall cancer incidence rate remained stable in women and declined by 1.8% per year in men.

“The continuing drops we’re seeing in cancer mortality are reason to celebrate, but not to stop [research],” said John R. Seffrin, PhD, Chief Executive Officer of the American Cancer Society. “Cancer was responsible for nearly one in four deaths in the United States in 2011, making it the second leading cause of death overall. It is already the leading cause of death among adults aged 40 to 79 and is expected to overtake heart disease as the leading cause of death among all Americans within the next several years. The change may be inevitable, but we can still lessen cancer’s deadly impact by making sure as many Americans as possible have access to the best tools to prevent, detect, and treat cancer.” ■