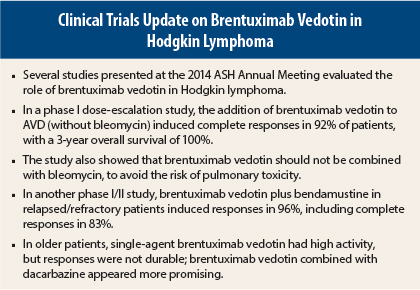 Several studies presented at the 2014 ASH Annual Meeting supported the use of brentuximab vedotin (Adcetris) in Hodgkin lymphoma.

The Reed-Sternberg cells of classical Hodgkin lymphoma typically express CD30, which is targeted by brentuximab vedotin, an anti-CD30 monoclonal antibody conjugated by a protease-cleavable linker to a microtubule-disrupting agent, monomethyl auristatin E.

Active in Combination With AVD

As initial therapy for patients with advanced-stage Hodgkin lymphoma, the addition of brentuximab vedotin to doxorubicin, vinblastine, dacarbazine (AVD) led to highly durable responses and a 3-year overall survival rate of 100%, in a study from the British Columbia Cancer Agency, the Mayo Clinic, MD Anderson Hospital, and the University of North Carolina.1

At the 2014 ASH Annual Meeting, Dr. Connors and colleagues reported safety and efficacy results for 51 newly diagnosed advanced-disease (80% stage III/IV) patients who received brentuximab vedotin in combination with ABVD or the same regimen without bleomycin (AVD) in a multicenter dose-escalation study. Patients received doses of 0.6, 0.9, or 1.2 mg/kg of brentuximab vedotin with standard doses of ABVD or 1.2 mg/kg with AVD on days 1 and 15 of each 28-day cycle for up to six cycles of therapy.

Pulmonary toxicity occurred in 11 patients, typically during the second half of treatment, and it resolved in 9 patients with standard approaches and treatment discontinuation (8 switched to AVD and brentuximab vedotin). In two patients, however, the toxicity proved fatal.

“Pulmonary toxicity was reversible in most patients, but one should never take the chance of it occurring,” Dr. Connors emphasized.

In the current analysis, the combination of AVD and brentuximab vedotin led to complete responses in 96% of 50 patients, a 3-year failure-free survival rate of 92%, and a 3-year overall survival rate of 100%. Responses to AVD (or ABVD) were durable. At a median follow-up of 40 months, the longest time to relapse was 22 months; 96% of patients have been followed longer than 22 months.

“No deaths from Hodgkin lymphoma have occurred,” Dr. Connors noted. “All five patients who relapsed after primary treatment have undergone autologous stem cell transplantation, and only one has subsequently relapsed.”

Front-Line Brentuximab Alone and With Dacarbazine

Another multicenter phase II study evaluated brentuximab vedotin as monotherapy and in combination with dacarbazine as front-line treatment of Hodgkin lymphoma in patients aged 60 and older. The interim results were reported by Andres Forero-Torres, MD, of the University of Alabama at Birmingham.2

The regimens were well tolerated, though one-third of patients had grade 1/2 neuropathy and gastrointestinal side effects; 83% of patients remain on the brentuximab vedotin plus dacarbazine regimen.

Although high single-agent activity was noted, Dr. Forero-Torres said it was not long-lasting. “That’s why we went to the combination, to see whether adding a chemotherapy agent would continue giving efficacy but with less toxicity and could keep those responses going for awhile.”

“Results from this trial will be used to identify an optimal regimen for this patient population,” he said.

Brentuximab Vedotin Plus Bendamustine in Patients With Refractory Disease

Another phase I/II study presented at the 2014 ASH Annual Meeting by Ann LaCasce, MD, of Dana-Farber Cancer Institute, Boston, found that an outpatient regimen of brentuximab vedotin (1.8 mg/kg) plus bendamustine (90 mg/m2) induced responses in 96% of 54 relapsed/refractory Hodgkin lymphoma patients, including complete responses in 83%.3 The median progression-free survival was not reached. “This compared favorably to historical data,” she noted.

The combination had a manageable safety profile with premedication for infusion-related reactions—the main toxicity—and it had no adverse impact on stem cell mobilization or engraftment.

“This combination represents a promising salvage regimen for patients with Hodgkin lymphoma who have relapsed/refractory disease after front-line therapy,” she said. Response durability continues to be assessed. ■

2. Forero-Torres A, Holkova B, Sharman JP, et al: Brentuximab vedotin monotherapy and in combination with dacarbazine in frontline treatment of Hodgkin lymphoma in patients aged 60 years and above: Interim results of a phase 2 study. 2014 ASH Annual Meeting. Abstract 294. Presented December 8, 2014.

As session moderator, Fredrick Hagemeister, MD, Professor of Medicine, University of Texas MD Anderson Cancer Center, Houston, commented during the discussion of Dr. Connors’ study. He first emphasized the need to establish the safety of new drugs in clinical trials before incorporating them...