ASCO's 50th Anniversary and the Road Ahead 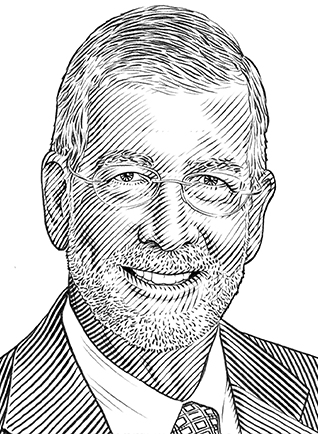 It is ultimately up to the physicians to hold each other accountable for finding solutions to measuring outcomes and delivering quality care. ASCO has been at the forefront of this movement with its CancerLinQ project, and I am confident that in time, we will not only change the way oncology is practiced, but all of medicine.

As the American Society of Clinical Oncology celebrates its 50th anniversary, ASCO’s Chief Executive Officer Allen S. Lichter, MD, FASCO, recently talked with The ASCO Post about the Society’s past, present, and future.

What are your thoughts about ASCO’s origins and its 50th anniversary?

A half-century ago, a group of seven physicians got together, unified by a singular mission: improving the care of people with cancer. That might sound simple, but back then it was bold and visionary. With more than 33,000 members today, ASCO has since grown into the world’s leading oncology medical professional organization. The Society’s dedication to furthering the field of oncology has placed it at the epicenter of cancer research, cutting-edge technology, health-care policy, advocacy, and a vast number of educational platforms. ASCO’s scope is best measured not in size and numbers but by its efforts to enhance every facet of cancer care—and in its unyielding dedication to the founders’ original charter of improving the lives of people with cancer.

Celebrating a 50th anniversary is an important milestone for any organization, especially for one in the challenging and constantly evolving environment of health care. In many respects, however, ASCO is a young organization. In fact, most of our sister societies are much older—some well over 100 years old. The specialty of oncology is less than 50 years old, so ASCO’s maturation has spanned the entire formal history of American oncology itself.

When the seven original founders began laying out the organization’s mission, surgery and radiation therapy were not oncologic specialties. Moreover, there were a mere handful of cancer drugs that were largely ineffective and hard for patients to handle; we now have about 160 agents in our armamentarium. Progress in oncologic surgery, radiation oncology, and oncologic imaging has been equally impressive. And when one looks at the progress we’ve made in cancer survival and overall care, it is apparent that ASCO never veered from its original mission.

What are your thoughts on ASCO’s leadership, and how has your own leadership role within the Society changed over the years?

Part of ASCO’s success has been the result of its leadership structure and our leaders’ guiding principles. It is essential for our leaders to have a grasp of three key questions: Where have we been? Where are we going? And how are we going to get there? In all the positions I’ve held—prior to becoming the Society’s CEO, I also served as Chair of several committees as well as being on the Board of Directors and ASCO President—I have tried to fully appreciate the importance of asking and answering those three simple questions.

Now that the Society has reached this 50-year milestone, it is a good place to pause and refresh our memory about where we have been and how much we’ve accomplished. But it is also a time to look forward with great anticipation of future accomplishments.

Positions that I’ve held in academic medicine, such as department chairman and dean, are directly involved in developing the careers of others and adding to the knowledge that underscores the oncology discipline. In ASCO we do that as well, although as CEO, my participation in that process is more indirect. We support our members, who in turn help support the development of students, trainees, and the next generation of oncologists. ASCO leadership also tries to provide the tools to help our members improve their own individual careers. It is all part of a very well organized leadership structure that gets the job done.

How would you describe the relationship between ASCO’s CEO and its President? Could you share some of your experiences in working with different ASCO Presidents and adapting to their individual styles and goals?

As CEO, I work for the ASCO Board of Directors. The President of the Society is Chairman of the Board and has a central leadership role in shaping the Board’s wishes, plans, and strategy. I’m into my eighth year as ASCO’s CEO, and I’ve had the opportunity to work with a number of wonderful presidents. Each had his or her own style, personality, and vision for the Society, and every president has been a pleasure to work with. Moreover, each president has developed in ASCO service through participation on various committees and chairmanships and finally on the Board of Directors.

Each president is powered by a great deal of knowledge about the inner workings of the Society. Serving as ASCO President was one of the highlights of my career. It also gave me a different perspective on serving the Society when I became CEO.

ASCO Takes the Lead in Quality

What do you believe is the most important thing ASCO  has accomplished since you’ve been CEO?

If I were to isolate one initiative or accomplishment as my legacy, it would probably be participating in the initialtion, development, implementation, and eventually the success of CancerLinQ™. This massive data project stems from the Society’s commitment to harnessing the power of health information technology to measure and improve the quality of oncology care. That vision reaches back to a 1999 ASCO study on quality, which led to the Quality Oncology Practice Initiative (QOPI®).

After a great deal of work, the QOPI program was formally rolled out to the membership in 2006. QOPI, in turn, led to CancerLinQ, which will allow us to analyze data in real time in the clinic. We will be able to capture outcomes, which will give this electronic system the ability to learn and rapidly refine our knowledge and clinical ­practice.

ASCO’s total embrace of quality measurement and personal accountability for care has moved the discipline forward in many ways. CancerLinQ will help us accelerate the development of new knowledge, which will translate into a system that is constantly learning and evaluating itself. Being part of that exciting mission is as good as it gets.

It’s important to note that although many entities and agencies, both public and private, are now engaging in quality measurement, it is ultimately up to the physicians to hold each other accountable for finding solutions to measuring outcomes and delivering quality care. ASCO has been at the forefront of this movement with its CancerLinQ project, and I am confident that in time, we will not only change the way oncology is practiced, but all of medicine. ■

Dr. Lichter is Chief Executive Officer of the American Society of Clinical Oncology.