Therapy for Hodgkin Lymphoma in the Elderly Remains Undefined

At the 2011 Pan-Pacific Lymphoma Conference held recently in Kauai, Hawaii, Andrew M. Evens, DO, MSc, Director of the Lymphoma Program at the University of Massachusetts Medical School in Worcester, discussed Hodgkin lymphoma in elderly patients.

Event-free survival and overall survival rates in older patients with Hodgkin disease have been reported at 40% to 50% lower than rates in younger patients. This difference in outcome may be related to several factors. The disease may have a different biology in older patients, who have a greater frequency of mixed cell disease and Epstein-Barr virus–related disease. 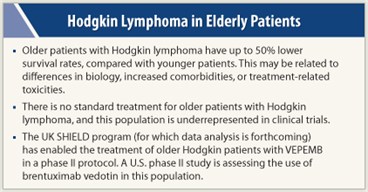 Older patients have a greater frequency of comorbidities that preclude appropriate treatment and thus frequently have inadequate treatment duration and intensity. They also have an increased frequency of treatment-related toxicities—especially bleomycin lung toxicity.

A recent retrospective analysis defined characteristics and outcomes among 95 Chicago area Hodgkin lymphoma patients over 60 years old seen between 2000 and 2010.1 Patients had a median age of 67 years, with 33% older than 70 years and 7% older than 80 years. Disease types were nodular sclerosis in 47%, mixed cell in 31%, not otherwise specified in 16%, lymphocyte predominant in 5%, and lymphocyte depleted in 1%.

Prior malignancy was present in 27% of patients, B symptoms in 54% (> 10% weight loss in 35%), ECOG performance status > 1 in 27%, stage III/IV disease in 65% (with bone marrow involvement in 25%), bulky disease in only 4%, and International Prognostic Score of 4 to 7 in 58%. With regard to functional status, 61% had a grade 3 or 4 comorbidity on the Cumulative Illness Rating Scale-Geriatrics, 26% were categorized as “not fit,” 13% had loss of activities of daily living, and 17% had a documented geriatric syndrome.

The overall response rate to treatment in this cohort of patients was 85%, with 73% having complete response. However, the 5-year event-free survival rate was 47% and 5-year overall survival rate was 58%, with rates being significantly lower in patients with stage III/IV disease than in those with stage I/II disease (37% vs 65%, respectively, for 5-year event-free survival, P = .007; 46% vs 79%, respectively, for 5-year overall survival, P = .001).

Bleomycin lung toxicity occurred in 32% of patients, which had a mortality rate of 25%. On univariate analysis, predictors of inferior event-free and overall survival were age greater than 70 years, B symptoms, weight loss, performance status > 1, low serum albumin, history of coronary artery disease, stage III/IV disease, any comorbidity of grade 3 or 4, and loss of activities of daily living. On multivariate analysis, predictors of poorer outcome were age greater than 70 years (HR = 2.24; P = .02), loss of activities of daily living (HR = 2.71, P = .04), and lack of complete response (HR = 8.1, P < .0001). The UK SHIELD (Study of Hodgkin lymphoma In the Elderly/Lymphoma Database) program has allowed physicians to treat elderly patients through a phase II study protocol using VEPEMB therapy (vinblastine, cyclophosphamide, procarbazine, etoposide, mitoxantrone, and bleomycin) or to collect data from elderly patients otherwise under treatment. More than 200 patients were registered in the program. Data collection included comorbidity and functional scales and quality-of-life assessments. Analyses of these data are expected in the near future.

In the United States, a phase II study is underway to examine incorporation of brentuximab vedotin (Adcetris) and positron-emission tomography (PET) into front-line treatment of advanced disease in patients aged 60 years or older.5 Brentuximab vedotin is a CD30-directed antibody-drug conjugate that was recently approved for treatment of patients with Hodgkin lymphoma after failure of autologous stem cell transplantation or after failure of at least two prior multiagent chemotherapy regimens in patients who are not stem cell transplant candidates.

Following PET and computed tomography (CT) staging, patients will receive two cycles of brentuximab vedotin at 1.8 mg/kg every 3 weeks, followed by PET in the first 22 patients. Patients with complete response, partial response, or stable disease will then receive six cycles of AVD (doxorubicin, vinblastine, dacarbazine). Those with complete or partial response on subsequent PET and CT are to receive consolidation treatment with brentuximab vedotin at the same dose for four cycles. ■

Expert Point of View: Therapy for Hodgkin Lymphoma in the Elderly Remains Undefined

2. Brenner H, Gondos A, Pulte D: Ongoing improvement in long-term survival of patients with Hodgkin disease at all ages and recent catch-up of older patients. Blood 111:2977-2983, 2008.

Expert Point of View: Therapy for Hodgkin Lymphoma in the Elderly Remains Undefined

Elderly Hodgkin lymphoma, typically defined as affecting individuals ≥ 60 years of age, remains a disease for which no standard treatment recommendation exists. This population is underrepresented in clinical studies, and survival rates in older patients with Hodgkin lymphoma are significantly...