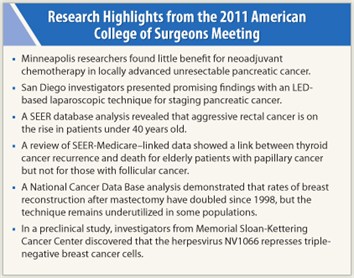 Research in cancer staging, surgical procedures, outcomes, and medical treatment was included among the 2,000 abstracts presented at the 97th Annual American College of Surgeons Clinical Congress in San Francisco. The ASCO Post was there to capture the latest findings.

Neoadjuvant therapy is increasingly being used in patients who present with locally advanced pancreatic cancer, but chemoradiotherapy did not result in tumor regression in a study reported by University of Minnesota, Minneapolis, investigators.1

The study included 16 patients with locally advanced (n = 6) or borderline resectable (n = 10) pancreatic cancer staged by CT and endoscopic ultrasound who received radiotherapy plus concurrent fluorouracil and cisplatin. After restaging, they received surgery if deemed resectable by radiologic response, or additional chemotherapy if deemed unresectable; those who eventually became resectable underwent surgery.

After neoadjuvant treatment, 10 patients remained stable and 6 had disease progression. No tumors regressed, and only 5 patients (31%) underwent surgery, all in the borderline resectable group, reported Vikas Dudeja, MD.

“You can see both the normal background of the anatomy plus the fluorescent tumor signal at the same time,” said Michael Bouvet, MD. The mean identification time was 63 seconds with the standard approach but < 10 seconds with fluorescence laparoscopy (P = .003). Fluorescence laparoscopy identified metastasis with a sensitivity of 96% vs 40% for bright light laparoscopy (P < .001); the positive predictive value was 91% and 65%, respectively (P < .001).

Co-investigator Hop Tran Cao, MD, estimated that fluorescence laparoscopy could prevent unnecessary resections. “About 15% of staging laparoscopies are currently inadequate for identifying small tumor deposits. This means that these metastatic lesions are only discovered at the time of surgery, and these patients would not be candidates for resection,” he said.

An analysis of the Surveillance, Epidemiology, and End Results (SEER) database showed that rectal cancer is escalating in young adults, and their risk of an aggressive histology is five times greater than for patients over age 40.3

Over the past 20 years, the incidence of rectal cancer has doubled in persons ≤ 40 years old, and this age group had a significantly higher prevalence of signet cell histology, compared to patients over 40 (4.63% vs 0.78%; P = .001), for a fivefold increased risk, reported Patrick Tawadros, MD, PhD, of the University of Minnesota, Minneapolis.

Thyroid cancer recurs in almost 40% of elderly patients, but the mortality risk from recurrence is limited to the papillary subset, researchers from Penn State Milton S. Hershey Medical Center in Hershey, Pennsylvania, reported.4

“Elderly patients with follicular disease and recurrence did not have a significantly different risk of death compared to patients without recurrences,” said Melissa M. Boltz, DO.

From the SEER-Medicare–linked database, researchers identified 2,883 patients, of whom 1,126 (39%) recurred, mostly within 2 years. Risk factors for recurrence included older age, advanced stage, lack of surgical treatment and regional disease. At 10 years, 662 (23%) died of cancer, 273 (41%) from thyroid cancer. Mortality risk was related to recurrence in papillary cancer (HR = 1.96) but not follicular cancer. For follicular thyroid cancer, cancer-specific mortality was related only to the presence of distant disease (HR = 17.78). For both histologies, increased age and advanced stage at diagnosis were also linked to mortality.

The use of breast reconstruction after mastectomy has doubled since 1998 but is still underutilized, a review of the National Cancer Data Base of the American College of Surgeons and the American Cancer Society revealed.5

The underutilization was most acute among certain subpopulations. Patients were less likely to have immediate reconstruction if they were over age 50, African-American, not privately insured, not cared for at an academic medical center, not living in a large metropolitan area, or had a census-derived household income lower than $46,000.

“A rate of 23% still means that 77% of women were not, as of 2007, having immediate postmastectomy breast reconstruction. And a disproportionate share of the increase we observed is among the more affluent patients and those in major medical centers. In that ‘low hanging fruit’ we are getting somewhere, but clearly we haven’t done a very good job of narrowing the gap in all patients,” he said.

Flank tumors injected with NV1066 experienced a near-complete regression, with mean volumes reduced 42-fold, compared with controls, she reported. The team is also studying the oncolytic virus in combination with a MEK inhibitor and an mTOR inhibitor “with very promising results,” she added. ■