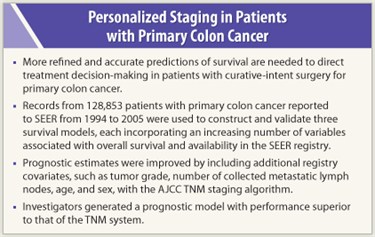 Supplementing the American Joint Committee on Cancer (AJCC) TNM classification system with additional information available from tumor registries can assist in personalizing treatment and follow-up care for patients with colon cancer, according to a collaborative study by investigators at Memorial Sloan-Kettering Cancer Center in New York, the Cleveland Clinic, and Dana-Farber Cancer Institute in Boston. The study was prompted by AJCC’s request for proposals to develop alternative staging algorithms based on “readily available information beyond classical Tumor Node Metastases (TNM) staging.” The results were published in the Journal of Clinical Oncology.1

The investigators used records from 128,853 patients with primary colon cancer reported to the Surveillance, Epidemiology, and End Results (SEER) Program from 1994 to 2005 to construct and validate three survival models for patients with primary curative-intent surgery. “Each of the three multivariable models incorporated an increasing number of variables,” the authors explained. 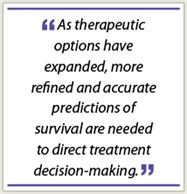 “The first, most basic model was the AJCC staging algorithm version, which included the T- and N-stage elements of the AJCC collaborative algorithm. The second model included number of lymph nodes examined, as well as number of examined lymph nodes containing tumor, instead of the N-stage element. The third model included elements in the second model, as well as tumor differentiation, patient age, and sex. These variables were chosen a priori on the basis of their well-established independent associations with overall survival and their availability in the SEER registry.”

The TNM staging system and models were compared by calculating a concordance index, performing calibration, and identifying the area under receiver operating characteristic curves. “Inclusion of additional registry covariates improved prognostic estimates,” the investigators reported. The concordance index increased from 0.60 for the AJCC model, with T- and N-stage variables, to 0.68 for the model including tumor grade, number of collected metastatic lymph nodes, age, and sex.

“As therapeutic options have expanded, more refined and accurate predictions of survival are needed to direct treatment decision-making. Individualized prognostication empowers patients, enhancing their ability to make informed and meaningful choices,” the authors stated. “We extended the AJCC TNM schema to include data elements routinely available from tumor registry data. With the addition of just a few variables, we were able to generate a prognostic model with performance superior to that of the TNM system. Because it is based on SEER data, the model can be regularly updated.” ■