A Conversation with Ginger Gardner, MD

Over the past several decades, advances in chemotherapy and surgery have begun to translate into improved survival in gynecologic malignancies. The ASCO Post recently spoke with Ginger Gardner, MD, a surgical oncologist at Memorial Sloan-Kettering Cancer Center, who specializes in the management of gynecologic malignancies, predominantly ovarian, uterine, and cervical cancers.

Despite the potential for cure in early ovarian cancer, the disease kills more women in the United States than all gynecologic malignancies combined. What challenges does this bring to you as a surgeon?

We realize that optimal management for ovarian cancer is a two-part strategy of surgical resection and combination chemotherapy. From a surgical standpoint, the spread of ovarian cancer with its route of peritoneal dissemination means that the disease can invade other pelvic structures, but it can also metastasize readily to the upper abdomen, involving the omentum,  diaphragm, liver surface, spleen, and a variety of upper abdominal structures.

Given that clinical situation, there has been an increased emphasis from a surgical perspective to expand our armamentarium in order to fully resect ovarian cancer when we encounter bulky disease in the upper abdomen.

What are the current controversial areas in ovarian cancer management?

There is some controversy regarding the appropriate candidates for neoadjuvant chemotherapy, defined as giving chemotherapy first to shrink the tumor, and then performing surgery at a later time. There is concern about the development of chemotherapy resistance prior to surgical resection with this approach, and this is weighed against the surgical risks of a large-scale tumor debulking at initial diagnosis.

In contrast, decades of experience in the U.S. have demonstrated a benefit of a primary optimal tumor debulking for ovarian cancer followed by chemotherapy, with overall survival greater than 5 years in many studies. Further, the use of intraperitoneal chemotherapy is associated with improved survival outcomes in randomized controlled trials and is most appropriate for patients who have completed an optimal tumor debulking first. As such, many oncologists support primary tumor debulking for the majority of patients. The most appropriate selection criteria for neoadjuvant treatment is yet to be standardized.

Managing advanced disease presents difficult challenges, is there any light at the end of the tunnel concerning early detection in gynecologic malignancies, especially ovarian cancer?

We’ve learned more in gynecologic oncology about surveillance markers, one of which is CA-125 level. Recent data show promise for a disease surveillance marker that measures the serum concentration of the protein HE4, which is overexpressed in women with ovarian cancer. A new test called OVA-1, which is a composite of several tumor markers, is now used for patients identified to have a pelvic mass. The results of this test serve as a triage point to help determine the likelihood of ovarian malignancy, and whether the woman should be referred to a gynecologic oncologist or can be managed by a general gynecologist for her surgery.

We are seeing progress in various markers that will one day give us better screening and diagnostic tools, but there is still much work to be done in this area. Screening for early disease is difficult given that we’re looking at a relatively low-incidence cancer, and the probability of false-positive results if applied as general population-based screening. Certainly, the risk-to-reward ratio needs to be factored into the development and widespread use of any screening tool.

As an expert in robotic surgery, please give the readers a better understanding of this relatively new and highly touted surgical tool.

Robotics is one of the newest tools for performing minimally invasive surgery. The procedure on the inside is the same, whether it is a standard laparoscopic procedure or a robotic procedure. The major difference with robotics is that the camera has three-dimensional optic image acquisition with high-definition display. The instrument tips have a 360° fluid rotational range. The primary surgeon maintains control of more instruments—the camera, two operative hands, plus a retracting instrument—all at the same time. Foot pedals toggle the instruments. This is in contrast to standard laparoscopy, during which the surgeon and first assistant each have two instruments.

The biggest expansion of robotic surgery for gynecologic malignancies is in uterine cancer and, to some extent, cervical cancer. A smaller role exists in ovarian cancer, where it is mostly used for staging or for resecting an isolated recurrence of disease.

The main advantage of robotic surgery is the amount of control the primary surgeon has. At our institution, we have also identified a decreased need for postop pain medication with robotic surgery compared with standard laparoscopy.

Given today’s economic stress, it’s important to mention that the upfront costs of this equipment are very expensive. I was trained in robotics in 2004, and there have been several equipment iterations since then. While the current system is much more streamlined, the platform still involves bulky, costly equipment.

With the advent of Pap, advanced cervical cancer rates in the United States have dropped drastically. What do you see for this disease at Memorial Sloan-Kettering?

Unfortunately, I continue to see cases of advanced cervical cancer. It’s a tragedy that these women, sometimes relocated to the U.S. from other countries, did not have proper screening opportunities either in their home country or after relocation here and then present with advanced-stage cervical cancer.

On the other end of the spectrum are younger women who have not completed fertility when they receive the diagnosis of early-stage cervical cancer. In this setting, we have made a lot of progress by being able to offer fertility-sparing surgery, such as radical trachelectomy for uterine preservation in women with early-stage cervical cancer. In fact, at Memorial Sloan-Kettering we just celebrated our 10-year anniversary in doing these procedures. We had a big event with mothers and their babies, a joyful recognition of how advances in specialized surgical procedures can impact survivorship and quality of life. It was very rewarding to see these women all together, successful survivors of early-stage cervical cancer, and the babies that have been born as a result of innovative surgical techniques designed for fertility preservation.

Where do we stand with regard to the management of gynecologic cancers?

There has been a lot of progress in the management of ovarian cancer, in terms of surgical management, newer chemotherapy agents, and targeted molecular therapeutics. In fact, we are now looking at a median survival of 5 years in many of our clinical trials, which really runs counter to the recurring phrase about ovarian cancer being the silent killer of women and the lack of progress in ovarian cancer outcomes. 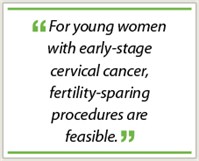 In uterine cancer, surgery is the mainstay of treatment, and there are a growing number of cases performed via a minimally invasive approach with decreased postoperative pain in part due to the introduction of robotics. In addition, the recognition that symptoms of postmenopausal bleeding or vaginal spotting can be an early sign of uterine cancer and should be followed with a prompt visit to the gynecologist is central to the identification of early-stage disease and improved outcomes.

Of the predominant gynecologic cancers, cervical cancer is the least common in the U.S. However, for young women with early-stage disease, fertility-sparing procedures are feasible and several centers are now accepting patients for this procedure on a selected basis. Several thousand American women die annually of this preventable disease, and many of those deaths are among women with poor access to routine medical care and screening. So that’s an area we can improve on with patient education and outreach services.

Any last thoughts about the direction of health care in this country?

Despite some concerns, I think the new initiatives toward cost-effectiveness research are a positive trend. However, despite the pressure to reduce costs, we need to keep an open mind and realize that while new treatments or procedures may not initially be cost-effective, costs decline with increasing use. Moreover, the long-term benefits derived from positive outcomes tend to mitigate initial costs.

Scientific and technologic advances have brought us to an exciting juncture where we can improve health-care access and outcomes across the full spectrum of patients facing gynecologic malignancies. And in some ways, I think we are becoming smarter in the way we decide how we use our precious resources. ■