A recent report from the International T-Cell Lymphoma Project detailed survival rates in patients with PTCL, more than 85% of whom had received an anthracycline-containing regimen. Five-year overall survival varied significantly according to subtype (P < .001), with rates of 70% for ALK-positive anaplastic large cell lymphoma, 49% for ALK-negative anaplastic large cell lymphoma, 32% for PTCL–not otherwise specified, 32% for angioimmunoblastic lymphoma, 32% for all NK/T-cell lymphoma, and 14% for adult T-cell leukemia lymphoma.1

The antifolate agent pralatrexate (Folotyn), which is designed to preferentially accumulate in cancer cells, produced good responses in the phase II PROPEL study in patients with relapsed or refractory PTCL and, in 2009, became the first agent approved for use in this setting.2 In this trial, 111 patients received pralatrexate 30 mg/m2 via IV push once weekly for 6 weeks supplemented with vitamin B12 1 mg IM every 8 to 10 weeks and daily oral folic acid 1.0 to 1.25 mg/d.3 A wide variety of PTCL subtypes were permitted in the study; the majority of patients (53%) had PTCL–not otherwise specified. 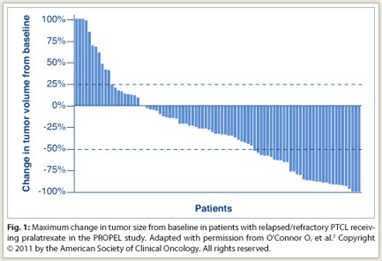 The overall response rate was 28%, with a disease control rate of 49%; 75% of patients with measurable disease had a decrease in tumor size (Fig. 1). Seventy percent of responders achieved response during cycle 1. The mean durations of treatment were 234 days in responders and 112 days in all patients. The median duration of response was 9.4 months, and median overall survival was 14.7 months. Adverse events were consistent with the antifolate class. Grade 3/4 adverse events consisted of mucositis (18%/4%), dyspnea (7%/0%), and fatigue (7%/0%) among nonhematologic adverse events, and thrombocytopenia (14%/19%), neutropenia (14%/8%), and anemia (16%/2%) among hematologic toxicities.

A recent study of bendamustine (Treanda) in 38 patients with relapsed PTCL who had received a median of two prior therapies showed an overall response rate of 47%, with complete response or unconfirmed complete response in 29%.4 Median duration of response was 157 days. Grade 3 or 4 adverse events included neutropenia (28 episodes) and thrombocytopenia (18 episodes).

The German High-Grade Non-Hodgkin Lymphoma Study Group recently analyzed outcomes in 343 patients from its clinical trials who had one of four major PTCL subtypes (ALK-positive or ALK-negative anaplastic large cell lymphoma, PTCL–not otherwise specified, and angioimmunoblastic T-cell lymphoma) and were treated with six to eight cycles of CHOP or etoposide plus CHOP.5 The researchers found that in patients aged 60 years or less with lactate dehydrogenase less than or equal to the upper normal value, the addition of etoposide (n = 103) improved 3-year event-free survival to 75.4%, compared with 51.0% for CHOP alone (n = 41; P = .003).

Romidepsin (Istodax) is a novel, potent bicyclic histone deacetylase (HDAC) inhibitor that was approved for use in cutaneous T-cell lymphoma in 2009, and for PTCL in 2011. In a phase II single-arm study, 131 patients with a wide variety of PTCL histologies received romidepsin at 14 mg/m2 via 4-hour infusion on days 1, 8, and 15 every 28 days. At least one prior systemic therapy had failed in this population. As judged by an independent review committee, the overall response rate was 26% with complete response in 13% of patients; stable disease was observed in an additional 25% of patients. The most common grade 3 or worse adverse events (≥ 10%) were thrombocytopenia, neutropenia, infection, and anemia. 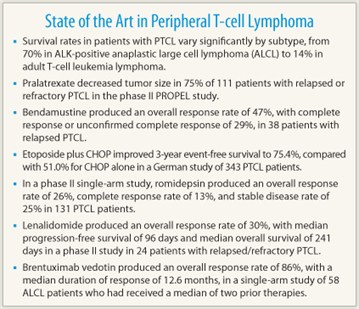 In a recent phase I study of the multikinase inhibitor dasatinib (Sprycel) in patients with a variety of relapsed/refractory non-Hodgkin lymphomas, complete response was observed in two patients with PTCL (the only complete responses observed in the study), with partial response in one PTCL patient. The implication that dasatinib may have been particularly effective in PTCL due to its inhibition of platelet-derived growth factor receptor alpha is being evaluated in a phase II trial.

Lenalidomide (Revlimid) has been investigated in PTCL on the basis of its antiangiogenic activity.6 In a phase II study in 24 patients with relapsed/refractory PTCL, it produced an overall response rate of 30%, with median progression-free survival of 96 days and median overall survival of 241 days. Grade 4 toxicities included thrombocytopenia in 33% and grade 3 toxicities included neutropenia in 21%, febrile neutropenia in 17%, and pain in 17%.

The CD30-directed antibody-drug conjugate brentuximab vedotin (Adcetris) was recently approved for treatment of patients with systemic anaplastic large cell lymphoma in whom at least one prior chemotherapy regimen has failed.7 In a single-arm study, 58 patients who had received a median of two prior therapies were treated with brentuximab vedotin at 1.8 mg/kg via IV infusion over 30 minutes once every 3 weeks; 72% of patients had ALK-negative disease. The overall response rate was 86%, with a median duration of response of 12.6 months; some responses were ongoing at the time of analysis. Complete response occurred in 57% of patients, with a median response duration of 13.2 months. Tumor reduction was observed in 97% of patients .

“Patients with most subtypes of PTCL have a very poor prognosis with standard therapies,” Dr. Vose told The ASCO Post. “Although several new therapies have been approved by the FDA in the past couple of years for some types of PTCL, we have a lot of research to do in trying to find curative therapies for PTCL patients,” she said.

“PTCL presents several challenges for treatment, including the need for improved induction regimens with combinations of standard and novel agents, the need for conolidation of the induction, and the possible need for a maintanance regimen to keep the patients in remission,” Dr. Vose continued. “Only collaboration by physicians and PTCL patients to enter clinical trials will allow us to gain the knowledge necessary to help current and future patients with PTCL and other rare types of lymphomas.” ■

Disclosure: Dr. Vose is a consultant or advisor for Celgene, Onyx, Seattle Genetics, and Spectrum Pharmaceuticals. She has received research funding from Allos Therapeutics, AstraZeneca, Bristol-Myers Squibb, Celgene, and Exelixis.

Analysis of Women Younger Than 40 With Breast Cancer

Mikkael A. Sekeres, MD, on Cancer Treatment in the Age of COVID-19: Personal Observations