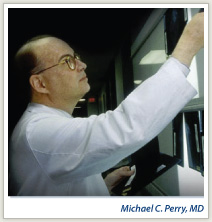 Michael C. Perry, MD, a renowned cancer clinician, educator, researcher, and administrator at the University of Missouri, Columbia, for more than 35 years, passed away October 23, 2011, after a long and courageous battle with polycystic kidney disease and cancer. He was 66.

Dr. Perry served as Director of Hematology and Medical Oncology, Chair of the Department of Internal Medicine, and a Senior Associate Dean at the University of Missouri School of Medicine. He also was the Nellie B. Smith Chair of Oncology, Medical Director of Ellis Fischel Cancer Center, and Medical Director of Clinical Trials for the University of Missouri’s Institute for Clinical and Translational Science. He became a Professor Emeritus in 2010.

A past member of ASCO’s Board of Directors and a member of several professional societies, Dr. Perry was also a member of the FDA’s Oncology Drug Advisory Committee. He was dedicated to the Cancer and Leukemia Group B (CALGB), an NCI-designated clinical research group, and served as Chair of its membership committee for more than 30 years.

Editor of the books Toxicity of Chemotherapy and The Chemotherapy Source Book, Dr. Perry published more than 150 research papers and nearly 50 book chapters. He also held editorial positions at the Journal of Clinical Oncology, Seminars in Oncology, and Contemporary Oncology.

Dr. Perry attended medical school at Wayne State. He then completed an internship and residency in internal medicine, as well as fellowships in hematology and oncology at the Mayo Clinic. He received a master’s of science degree in medicine from the University of Minnesota in 1975, when he joined the faculty at the University of Missouri.

He is lovingly remembered by his family—wife Nancy; daughter Rebecca Perry Magniant, her husband Stanislas, and daughters Lucie and Charlotte, all of Paris, France; and daughter Katherine Perry Harris, her husband Jeff, and daughter Grace, all of Columbia. He also is survived by a brother, Paul Perry, of Taylor, Michigan, and numerous nieces and nephews. ■