With a median follow-up of 12.5 months, the likelihood of disease progression or death among the 724 women enrolled (all of whom had resistance to prior hormonal therapy) was reduced by 56% when the mTOR inhibitor everolimus (Afinitor) was added to exemestane, Gabriel N. Hortobagyi, MD, reported at the 2011 San Antonio Breast Cancer Symposium. The time to disease progression was prolonged by 4.2 months. (Results were simultaneously published in The New England Journal of Medicine.1)

Adding everolimus increased rates of certain toxicities, but not to the detriment of quality of life. Markers of bone turnover all increased with exemestane alone, but decreased with the combination. 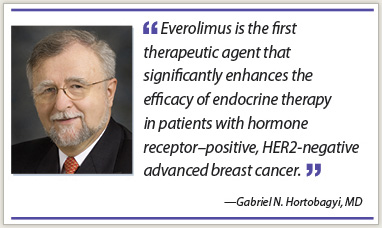 “Everolimus is the first therapeutic agent that significantly enhances the efficacy of endocrine therapy in patients with hormone receptor–positive, HER2-negative advanced breast cancer. This observation provides additional treatment options for these patients,” maintained Dr. Hortobagyi, who is Chair of Breast Medical Oncology at The University of Texas MD Anderson Cancer Center in Houston.

“The demonstration that the combination of an endocrine agent with an mTOR inhibitor results in superior outcomes compared to endocrine therapy alone represents a paradigm shift in the management of advanced hormone receptor–positive breast cancer,” he added.

“I am excited” about these findings, Lisa Carey, MD, ScM, of the University of North Carolina at Chapel Hill, commented in an interview. “It’s nice to see [research on] the PI3 kinase–mTOR pathway coming to fruition. And the low-hanging fruit for this are the ER-positive cases, in which [this combination therapy] has been kicked around for a number of years with preclinical and early clinical studies. It’s nice to see a well-designed study that really does place it firmly clinically.”

Given the treatment history of the BOLERO-2 population, the findings may be relevant only to patients having acquired hormonal resistance, according to Dr. Carey. “I don’t know if this [combination] will help with de novo resistance,” she noted.

Hope S. Rugo, MD, of the University of California, San Francisco, commented, “the nice thing is that this [exemestane/everolimus combination] is an all-oral regimen.” Toxicity was increased but manageable with dose adjustments.

The reasons for the favorable effect on bone turnover are unknown, she observed. “This may be due to an independent effect of everolimus, or it could just be because patients were responding better.… We’ll need to look at this in the future to better understand this impact.”

Explaining the trial’s rationale, Dr. Hortobagyi noted that activation of the mTOR pathway by means other than estrogen receptor (ER) signaling is a known mechanism of resistance to hormonal therapy. “So … we hypothesized that inhibition of mTOR simultaneously with estrogen deprivation would overcome resistance to endocrine therapy.”

Postmenopausal women with metastatic or unresectable locally advanced breast cancer were eligible for the international phase III trial if they had ER-positive, HER2-negative disease and had experienced recurrence or progression on a nonsteroidal aromatase inhibitor (letrozole or anastrozole). They were randomly assigned 2:1 to receive exemestane plus either everolimus or placebo.

The patients had a median age of 62 years. Some 70% had measurable disease, and 84% had had documented sensitivity to a previous hormonal therapy. Slightly more than half had received at least three prior therapies for metastases, indicating “this is clearly a population where resistance has set in,” Dr. Hortobagyi said. 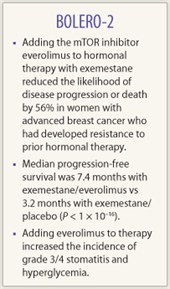 The findings were the same when progression-free survival was instead assessed by central review. And the benefit was of similar magnitude in all patient subgroups, including those with differing numbers of prior therapies.

Not unexpectedly, patients in the everolimus group had higher rates of grade 3/4 stomatitis (8% vs <1%) and hyperglycemia (5% vs <1%). Pneumonitis with the drug was uncommon.

Any impact of everolimus dose adjustments will need to be further assessed, according to Dr. Hortobagyi. “As with several other drugs that we have developed in the past, this drug has its challenges too, and you need to acquire experience with managing it. With that experience and with clear guidelines, it is a drug that can be managed very effectively.” The relative dose intensity for everolimus was 8.7 out of a possible 10. “That tells you that the great majority of patients did complete treatment until progression of disease,” he said. ■

Disclosure: Dr. Rugo has received research funding from Genentech, Novartis, Merck, and Pfizer. Dr. Hortobagyi is a consultant to Novartis, and his institution receives research support for a clinical trial on which he is the national principal investigator. Dr. Carey reported no potential conflicts of interest