“After breast-conserving surgery, radiotherapy to the conserved breast halves the rate at which the disease recurs and reduces the breast cancer death rate by about a sixth,” the Early Breast Cancer Trialists’ Collaborative Group (EBCTCG) concluded in a meta-analysis published in The Lancet.1 “This is some of the most important data we have with respect to radiation benefits in breast cancer,” Thomas A. Buchholz, MD, Head of the Division of Radiation Oncology at The University of Texas MD Anderson Cancer Center in Houston, remarked in an article in The New York Times.2 “Most importantly,” Dr. Buchholz said in an interview with The ASCO Post, the study “confirms with very long follow-up that radiation improves the overall survival of patients with breast cancer.”

The meta-analysis looked at individual patient data for 10,801 women in 17 randomized trials of breast-conserving surgery with or without radiation therapy. “Median follow-up was 9.5 years at risk per woman and 25% of women were followed up for more than a decade,” the EBCTCG reported.

“The Early Breast Cancer Trialists’ Collaborative Group was able to compile the raw data from almost every phase III trial done in the United States and Europe. And they reanalyze data every 5 years,” Dr. Buchholz explained. Those findings showed that radiation reduced the probability of recurrence of any type (locoregional or distant) by 50%. “To put this benefit into context,” Dr. Buchholz wrote in a Lancet commentary,3 “a 50% proportional reduction in 10-year recurrence exceeds that from chemotherapy alone or hormonal therapy alone, and is roughly equivalent to the benefits of trastuzumab (Herceptin) for patients with HER2/neu–positive disease.”

Dr. Buchholz provided historical perspective on the data. “Back in the 1980s and 1990s, a lot of people believed that radiation was effective at reducing breast recurrences but that it didn’t really matter because it might not improve overall survival. These data really conclusively demonstrate that that’s not true—that radiation given upfront at the time of the initial treatment has the capability of improving the patient’s rate of cure,” he said.

“The benefits of radiation are persistent over time,” Dr. Buchholz continued. “The proportional benefit that radiation provides over time is maintained and consistent. So it’s not just a temporizing measure. There’s evidence that it really is eradicating and curing.” After 10 or 15 years, “the benefits of radiation have peaked—they don’t further decrease, they don’t further increase. And that makes sense because over that period of time, if a patient was going to have a recurrence, it would have happened,” Dr. Buchholz said.”

The finding of improved overall survival underscores how radiation has been improved and refined over the past few decades. “Some of the very first phase III trials in medicine were investigating radiation in this setting after mastectomy. But back in the 1950s and 1960s, the techniques of delivering radiation were crude, really obsolete by today’s standards,” Dr. Buchholz said.

“Radiation had some downsides, particularly with respect to the heart,” he continued. “If you irradiated the heart as an ‘innocent bystander’ because it lives next door to the left breast, you could promote cardiovascular disease and increase the risk of dying of heart disease. There was a concern that any benefit in terms of reducing breast cancer death would be offset by an increase in cardiovascular death. Now we have been technically able to overcome that challenge,” he stated, “and if you have a decrease in breast cancer recurrence, you are going to see an overall survival advantage.” 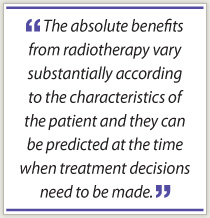 The proportional benefits of radiotherapy following breast-conserving surgery “vary little between different groups of women,” the EBCTCG noted in its interpretation of the results from the meta-analysis. “By contrast,” the authors continued, “the absolute benefits from radiotherapy vary substantially according to the characteristics of the patient and they can be predicted at the time when treatment decisions need to be made.” These patient characteristics include age, tumor grade and size, estrogen receptor (ER) status, and use of tamoxifen.

“Halving a big risk produces a bigger absolute benefit than halving a small risk,” the authors explained. Most of the women (7,287) had node-negative (pN0) disease, and in these women, “the annual recurrence rate without radiotherapy was strongly correlated with age (inversely), tumour grade, tumour size, ER status (especially when tamoxifen was used in ER-positive disease), and extent of surgery (inversely),” the EBCTCG reported. “The absolute recurrence reduction produced by radiotherapy also depended strongly on these factors.”

Strategies for ER-negative and Triple-negative Disease

In this and other studies, Dr. Buchholz pointed out, reductions in risk of recurrence were greater for patients with ER-positive disease than for those with ER-negative or triple-negative disease. “These insights suggest that intensification of locoregional treatment should be studied for ER-negative disease,” he wrote in his commentary for The Lancet.

Elaborating on this during the interview with The ASCO Post, Dr. Buchholz said, “I think we are starting to appreciate—and this is another important insight from the study—that not all breast cancers are identical. ER-negative or triple-negative disease is almost a different cancer from ER-positive disease. When you hear the term triple-negative, you can assume that three targets—the estrogen receptor, progesterone receptor, and HER2—are missing. What need to find some positive targets, and then we can develop strategies.” He compared this process to what happened with HER2—first the discovery that HER2 status is an important determinant of outcome for patients with breast cancer, but “most importantly being able to design a therapy specifically against HER2 and completely change that prognosis.”

He stressed that we can already do things to help address the higher risk of recurrence in women with ER-negative disease. “For instance,” he said, “we could ensure that we achieve good surgeries, or negative margins. If there is a close margin in ER-positive breast cancer, I might approach it differently than in ER-negative disease, where we would be likely to reexcise. We could use tumor bed boost in addition to whole-breast irradiation to escalate the dose in that region.” He explained that “age and biology both come into play as to how much additional absolute risk reduction a boost will provide, but clearly for a younger patient with ER-negative breast cancer, it would be the standard of care.”■

“The message” of a meta-analysis of 17 randomized trials of breast-conserving surgery with or without radiation, “should be that the benefits of radiation are not temporary, that it provides an increased chance of cure,” Thomas A. Buchholz, MD, told The ASCO Post. The meta-analysis was conducted by ...