In a phase I/II study of patients with advanced multiple myeloma and t(11;14) translocations, the combination of venetoclax and dexamethasone showed strong, durable activity, even in patients refractory to daratumumab, study investigators reported at the 2019 American Society of Hematology (ASH) Annual Meeting & Exposition.1

“This is a biomarker-driven approach that shows durable response in patients with multiple myeloma. In phase II, where 87% of patients were refractory to a daratumumab-based regimen, 48% of patients achieved at least a partial response and 35% had a very good partial response or better,” said Jonathan L. Kaufman, MD, of Winship Cancer Institute, Emory University School of Medicine, Atlanta. “We think that’s really remarkable.”

This phase I/II open-label trial is evaluating the safety and efficacy of venetoclax plus dexamethasone in 51 evaluable patients with t(11;14) relapsed or refractory multiple myeloma. Dr. Kaufman reported the results of both the dose-escalation and safety-expansion cohorts.

Key eligibility criteria for the venetoclax plus dexamethasone cohort in phase I included prior treatment with a proteasome inhibitor and an immunomodulatory drug, and an Eastern Cooperative Oncology Group (ECOG) performance status of up to 1. In phase II, patients had an ECOG performance status of up to 2; disease progression on or within 60 days from the last dose on previous treatment; and receipt of at least two lines of therapy with a proteasome inhibitor, an immunomodulatory drug, daratumumab, and glucocorticoids. All patients were required to have t(11;14).

The median lines of therapy were three in the phase I expansion and five in phase II. More than half of the patients had undergone stem cell transplantation, and more than half were refractory to both a proteasome inhibitor and an immunomodulatory drug. “In phase II, 100% of patients had prior treatment with a proteasome inhibitor, an immunomodulatory drug, and daratumumab, and most were refractory to these agents,” noted Dr. Kaufman.

In the phase I cohort, the overall response rate was 60%, with 5% complete responses and 30% very good partial responses or better (see Table 1). In phase II, these rates were 48%, 6%, and 35%, respectively. These responses were robust, considering patients had received an average of five prior lines of therapy, and almost all were refractory to daratumumab, Dr. Kaufman said. 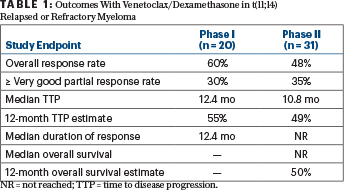 “Venetoclax plus dexamethasone combination therapy had an acceptable safety profile in patients with t(11;14) relapsed or refractory disease,” Dr. Kaufman said. “Adverse events were similar and as expected between the two groups (phase I and II).” Predominant adverse events of any grade were insomnia, hypophosphatemia, hyperglycemia, diarrhea, nausea, lymphopenia, and thrombocytopenia. The predominant grade ≥ 3 toxicities were hypophosphatemia, lymphopenia, thrombocytopenia, and neutropenia.

DISCLOSURE: Dr. Kaufman has received honoraria from or served as an advisor, consultant, or director for Janssen, Tecnofarma, Sanofi, Amgen, and TG Therapeutics.

Suzanne Lentzsch, MD, PhD, Professor of Medicine and Director of the Multiple Myeloma and Amyloidosis Service at Columbia University, offered her thoughts on venetoclax-based regimens, such as the one described by Dr. Kaufman.

“Despite tremendous progress in the...