Growing up on the Seneca Nation in Western New York, Rodney Haring, PhD, MSW, learned the concept of “The Good Mind,” largely from the matrilineal voices in his community. He calls this philosophy, which is one of the shaping principles of the Haudenosaunee people, “a strength from awareness of purpose, thoughts, and actions towards well-being.” Now, he is building that philosophy into the work of the Center for Indigenous Cancer Research at Roswell Park Comprehensive Cancer Center—the first initiative of its kind in the Northeast, dedicated to reducing cancer’s impact on indigenous communities regionally, nationally, and internationally.

Working with partners across North America, center staff will coordinate educational events, host health screenings, conduct research, and develop action plans to address not only health disparities, but larger issues that impact wellness, such as humans’ relationship to the environment. Dr. Haring, who leads the new center as Director, highlights what can be gained from applying lessons from both academic medicine and indigenous knowledge.

The center fulfills some of the benchmarks established through Roswell Park’s 2016 collaborative agreement with the Indian Health Service of the U.S. Department of Health and Human Services, another first-of-its-kind initiative focused on health care, cancer prevention, facilitation of research, and expansion of career and educational opportunities. 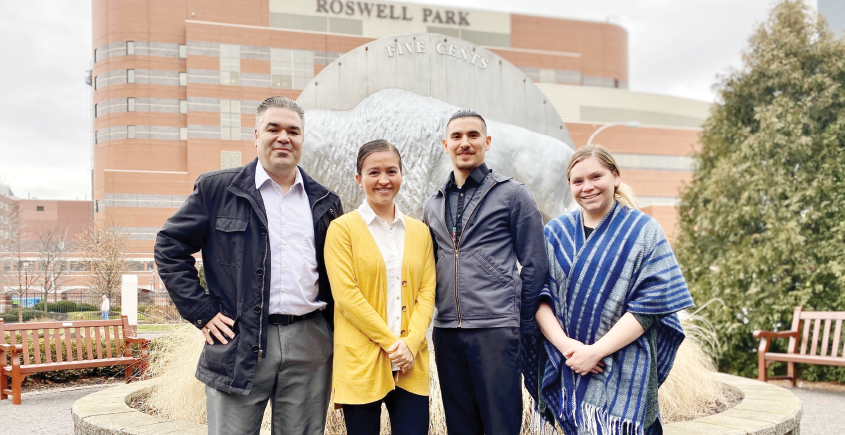 The team has built an international collaborative research network with indigenous researchers from as far away as Norway, New Zealand, and Pacific Island Nations. Their work has been marked by collaboration on outreach and prevention initiatives in both native urban settings and rural indigenous territories as well as has helped create learning and internship opportunities for indigenous high school and college students.