Norman E. Sharpless, MD: From Director of a Comprehensive Cancer Center to Director of the NCI

In this installment of the Living a Full Life series of articles, guest editor Jame Abraham, MD, FACP, interviewed Norman E. Sharpless, MD, Director of the National Cancer Institute (NCI). Dr. Sharpless was officially sworn in as the 15th Director of the NCI on October 17, 2017. Prior to his appointment, Dr. Sharpless served as Director of the University of North Carolina (UNC) Lineberger Comprehensive Cancer Center, a position he held since January 2014.

On an unexpected call: “Two years ago, I received a call from the White House, asking if I’d be interested in being considered for NCI Director. Having had such a great relationship early in my career with the Institute and realizing how important the NCI is for the future of cancer research, I leapt at the opportunity.”

On the untimely passing of Arti Hurria, MD: “Arti was one of the powerful voices in geriatric oncology. She was a friend and a special person, and I was deeply saddened by her death. She’ll be missed.”

On the invention-to-patent process: “A discovery that you publish about in a journal does not necessarily make a good patent. The rules are very different. It also takes a lot of patience.”

The Son of Two Doctors

“In the end, I decided to go to medical school because it seemed like a low-risk choice. I went to the School of Medicine at UNC, Chapel Hill. Between my second and third years, I took a year off and joined the Howard Hughes Medical Institute Medical Research Scholars Program on the National Institutes of Health campus. It was an incredibly rewarding experience, and I’ve told many people that it was the best year of my life,” shared Dr. Sharpless. 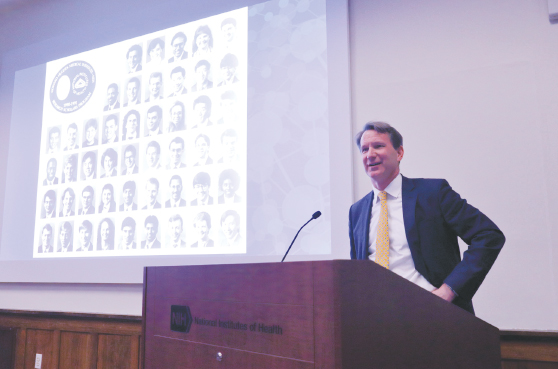 He continued: “It was the first time I’d done any biomedical research, and it really piqued my interest in the research aspect of medicine. After I finished medical school, I did an internship and medical residency in internal medicine at Massachusetts General Hospital, followed by a hematology-oncology fellowship at Dana-Farber/Partners Cancer Care, Boston.”

Asked what factors led to his decision to pursue a career in oncology, Dr. Sharpless replied, “In high school, I would work in my father’s pathology lab. He’d show me liver tissue, blood smears, and cancer cells. I found it very interesting. Later, at the Howard Hughes program, I worked in a human immunodeficiency virus lab. So, my decision came down to infectious diseases or oncology. George Daley, MD, [now Dean of Harvard Medical School], was then Chief Resident at Mass General. During my second year, I said, ‘George, I’m torn between infectious diseases and oncology.’ George said, ‘Don’t do infectious diseases; go into hem-onc. It’s much more fun!’ And so, between the influence of my Dad, George, and many others, I became a hematologist.”

Dr. Sharpless’ notable career as a medical oncologist/researcher and scientific entrepreneur took root at Dana-Farber Cancer Institute and blossomed at UNC School of Medicine, where he served as Professor of Medicine and Genetics. Then, he assumed the role of Associate Cancer Center Director for Translational Research at the Lineberger Comprehensive Cancer Center. In 2014 he became the Center’s Director. Some 3 years later, Dr. Sharpless would receive an unexpected but impossible-to-refuse offer: to become Director of the NCI.

“My old boss at Dana-Farber, Ron DePinho, MD, said he was going to nominate me for the directorship. I never expected it would go anywhere until 2 years ago in February, when I received a call from the White House, asking if I’d be interested in being considered for NCI Director. Having had such a great relationship early in my career with the Institute and realizing how important the NCI is for the future of cancer research, I leapt at the opportunity,” explained Dr. Sharpless.

He stressed that consideration for the role required a lengthy and complex vetting process. “It was a long period of purgatory, in which I was immersed in the federal process, but it ended on October 17, 2017, when I was sworn in as the 15th Director of the NCI. It was quite an honor,” Dr. Sharpless said.

Dr. Sharpless has served as Director for a little more than a year. Asked how the experience has been, he responded, “I’m having a ball. The people around me are just great. And I’ve been struck by how eager and passionate our scientists and administrators are to achieve the mission of

If you have great people and generous funding, it makes it a great time to be a cancer researcher.
— Norman E. Sharpless, MD

the Institute, which is to greatly reduce cancer suffering in the United States. There’s a positive can-do spirit, and it’s such an exciting time to be at the NCI. Support from Congress has been terrific; there’s a strong bipartisan appreciation of the NCI’s value to the country. So, if you have great people and generous funding, it makes it a great time to be a cancer researcher.”

Decades of Research on Aging and Cancer

In addition to serving as Director of NCI, Dr. Sharpless is Chief of the Aging Biology and Cancer Section in the National Institute on Aging’s Laboratory of Genetics and Genomics. He was recently able to establish a lab at NIH so that he can continue doing the research he began during his formative years in Boston.

“When I was in the lab at Dana-Farber, I was working on an important gene that prevented mice and humans from developing cancer by activating the process of cellular senescence. It became clear that cellular senescence prevented one from developing cancer on an almost daily basis, but the bad news was that the activation of the mechanism had toxicities for the organism. We spent 20 years of research to prove the hypothesis about the relationship between aging and cancer. Back then, it was a controversial theory, but now it’s been proven by multiple studies,” explained Dr. Sharpless. “If you look at the demographics of the American population, you’ll understand why geriatric oncology is an expanding industry,” he added.

The Passing of a Colleague and Friend

Dr. Sharpless noted the tragic death of a national leader in geriatric oncology, Arti Hurria, MD. “Arti was one of the powerful voices in the field. She was a friend and collaborator of mine, and I was deeply saddened by her death. In 2008, my colleague at UNC, Dr. Hyman Muss, invited Arti to give a talk, and he introduced us. And it was clear right away that Arti was different. Most of the geriatric oncologists I’d worked with weren’t terribly interested in the basic science of aging, but Arti was passionate about how scientific knowledge could translate into care for older patients with cancer. With quite modest funding, she constructed a network where people communicated and were trained in elderly cancer care. Arti was a special person. She’ll be missed.”

Along with his role at the NCI and research activities, Dr. Sharpless is an innovative entrepreneur, one of the founders of G1 Therapeutics, a clinical-stage biopharmaceutical company developing novel, small-molecule therapies that address significant unmet needs in the treatment of cancer. Moreover, he has 10 patents for his inventions in the oncologic sector. He acknowledged that the invention-to-patent process is largely misunderstood among academics.

“I got a lot of advice about intellectual property early on in my career, and most of it turned out to be wrong. A discovery that you publish about in a journal does not necessarily make a good patent. The rules are very different. The invention process is complex and involves multiple steps. It also takes a lot of patience. One thing I didn’t realize at the beginning of my career was just how important patents are. There’s no incentive to spend the time and money to invent something if it can’t be protected, especially in therapeutics.”

Under the principal mandate of public health, the cooperative group model has bettered the quality of life for American patients with cancer. Dr. Abraham asked Dr. Sharpless to weigh in on the current status of these groups. 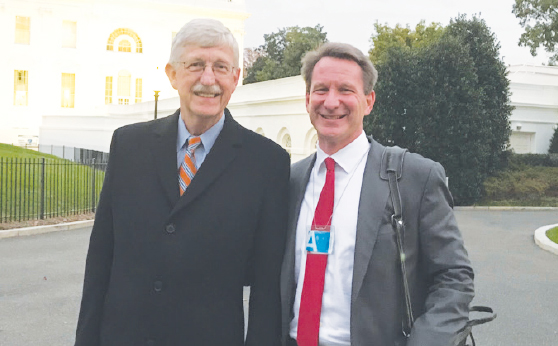 “Every one of today’s cancer therapies is available because of clinical trials, but trials are increasingly challenging. The National Clinical Trials Network (NCTN) is one of the most important programs conducted by the NCI,” revealed Dr. Sharpless. “I spent a lot of time during my first 6 months as Director talking to the team leaders in the NCTN. There is universal agreement that the groups play a pivotal role in clinical trials that bring new drugs into the pipeline that is not met by industry. However, I also received comments about how the groups could work better and more quickly in their drug development.”

Dr. Sharpless continued: “I’ve come to realize that the NCTN is not right for every trial, and there are certain studies that work better in other networks, such as industry. We’ve looked carefully at the infrastructure, trying to determine its strengths and weaknesses. One main objective is to find ways to open trials more quickly. I clearly understand the NCTN has been underresourced. One concern I heard repeatedly was the lack of reimbursement for patient costs to oncologists. We put some more funding into the NCTN for patient costs last year, and we hope to do so again this year. There’s work to be done, but it will pay off in the end.”

Advice for the Next Generation

“I spend a lot of time telling medical and doctoral students that oncology is a very rewarding career,” Dr. Sharpless said. “It has the long-time

“I’ve come to realize that the National Clinical Trials Network is not right for every trial, and there are certain studies that work better in other networks, such as industry.”
— Norman E. Sharpless, MD

patient continuity of primary care but also is immersed in cutting-edge dynamic science, in which fiction becomes reality in record time. I tell young oncologists what it was like in the old days, where we would have a 3-day conference on colon cancer and spend days arguing about how to give fluorouracil for a 21% response rate vs a 23% response rate. Now, we have a wide variety of effective therapies and combinations; it seems like we’re adding one every week. The field is dynamic and gratifying.”

How does the super-busy NCI Director and scientist decompress? “I’m a pretty boring person: I have only a few core activities. I’m an empty nester, as my kids are in college, so when they’re home, I spend as much time with them as possible. I’m also an avid runner and am enjoying the trail running in DC. And, most recently I’ve rediscovered my love for basketball. I played frequently when I worked at UNC but hadn’t played much recently. The U.S. Food and Drug Administration (FDA) has a weekly game that I play in. The FDA has surprisingly aggressive players, very competitive. It’s a lot of fun. I also have a lab here, which is rewarding.”

In closing, Dr. Sharpless noted: “The NCI is a valuable institution, and it’s an honor serving as Director, especially in such an exciting era in oncology. I’m very optimistic that we are on the path toward developing cures for most cancers.” ■