Cancer on the Global Stage: Incidence and Cancer-Related Mortality in Bangladesh

For the convenience of the reader, each issue will focus on one country from one of the six regions of the world as defined by the World Health Organization (ie, Africa, the Americas, South-East Asia, Europe, Eastern Mediterranean, and Western Pacific). Each section will focus on the general aspects of the country followed the current and predicted rates of incidence and cancer-related mortality.

It is hoped that through these issues, we can increase awareness and shift public policy and funds toward proactively addressing this lethal disease on the global stage.

Bangladesh, a South Asian country located to the east of India on the Bay of Bengal, has a population of 156 million (8th most populated country in the world). With 1,074 people per square kilometer, Bangladesh is also one of the most densely populated countries.

Since the country gained independence from Pakistan in 1971, it has been affected by environmental and economic issues. Nearly 31.5% of the population in Bangladesh lives below the poverty level. Despite this fact, Bangladesh now has the 31st highest economic growth worldwide, with a 6.2% average annual increase in gross domestic product.

Cancer is the 6th leading cause of death and accounts for 10% of all mortality in Bangladesh. Based on two hospital-based cancer registries, nearly 66% of patients with cancer are estimated to be within the age bracket of 30 to 65 years and constitute the main workforce structure in the country.

Breast, esophageal, and cervical cancers are the most common cancers by incidence in Bangladesh. However, esophageal, lung, and pharyngeal cancers account for the highest rates of cancer-related mortality. The incidence of cancers is expected to rise from 136,719 cases in 2015 to 250,726 cases in 2035.

Lung cancer is the most common cancer in men in Bangladesh, and 48.3% of men smoke tobacco. With tobacco being one of the most important modifiable cancer risk factors, Bangladesh has implemented an action plan for tobacco control.

Breast cancer is the most common cancer in women in Bangladesh. Despite this fact, the most basic preventive services (breast palpation) are not universally available at the primarily health-care level. However, efforts are underway to improve education and awareness on self-breast examination. With a high rate and mortality from esophageal and pharyngeal cancers, educational efforts on mouth self-examination are also underway.

Bangladesh has several nutritional health hazards likely contributing to the current cancer burden. Millions of people in Bangladesh have been exposed to arsenic, a well-known carcinogen, due to groundwater contamination. There are also concerns about carcinogens in the food supply, with the use of formalin in several foods and dichlorodiphenyltrichloroethane (DDT) in dried fish to name a few.

The prevalence of obesity in Bangladesh is quite low, at 3.3%. This rate is likely due to the high percentage (16.4%) of the population consuming a suboptimal amount of nutrition for minimal energy expenditure.

With less than 1 hospital bed (0.6) and physician (0.36) per 1,000 people, Bangladesh is generally not able to provide adequate treatment facilities for cancer management. Bangladesh spends 2.8% of its gross domestic product on health care, which is the 10th lowest in the world. There is a severe shortage of radiation therapy machines and trained oncologists in Bangladesh. According to the World Health Organization (WHO), radiotherapy and chemotherapy are generally available in the public health system, but oral morphine and home health care for people with advanced-stage cancer are not generally available.

Although communicable disease has been a major burden on the health-care system in the past, improved interventions have led to a rise in noncommunicable diseases, such as cancer. Efforts to address this epidemiologic shift in disease burden are fairly recent. The government of Bangladesh formulated the “National Cancer Control Strategy and Plan of Action” in 2007 with assistance from WHO. The action plan includes primary preventive measures, including education, vaccination, and tobacco control. Early cancer-detection programs are targeted at oral, breast, and cervical cancers, with the majority of efforts dedicated to education on warning signs.

Screening for breast, cervical, and colorectal cancers is not universally available at the public primary health-care level. With the severe shortage of medical providers and facilities, the “National Cancer Control Strategy Plan of Action” has also focused its efforts on training more personnel. With the increasing burden of cancer in Bangladesh, both in terms of mortality and economics, it is hoped that these efforts will lead to improvement in cancer prevention, screening, and treatment. ■ 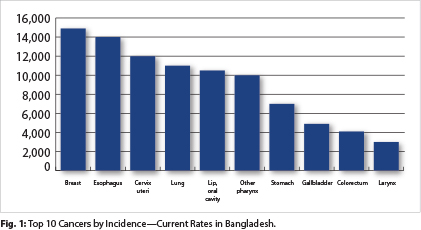 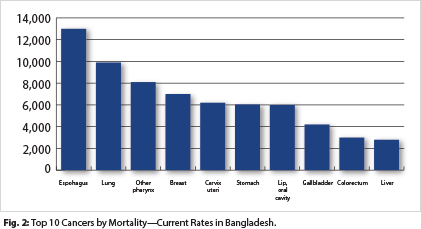 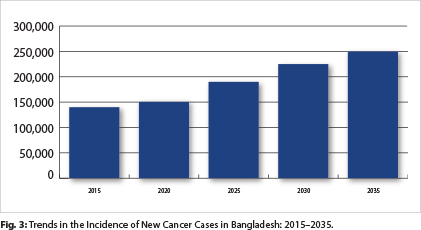 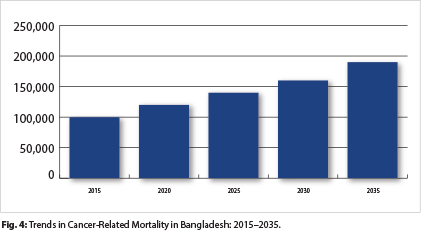