The use of dietary supplements by patients with cancer has increased significantly over the past 20 years despite insufficient evidence of safety and effectiveness. Finding reliable sources of information about dietary supplements can be daunting. Patients typically rely on family, friends, and the Internet, often receiving misleading information. The ASCO Post’s Integrative Oncology series is intended to facilitate the availability of evidence-based information on integrative and complementary therapies commonly used by patients with cancer. We chose mistletoe for this issue because of its increasing use by patients with cancer. Compiled by Barrie R. Cassileth, PhD, and Jyothirmai Gubili, MS, Memorial Sloan Kettering Cancer Center. The free About Herbs website is managed by K. Simon Yeung, PharmD, MBA, LAc, Memorial Sloan Kettering Cancer Center.

Mistletoe is a semiparasitic plant that grows on many species of trees native to Europe and Western Asia. It has been used in traditional medicine for the treatment of epilepsy, hypertension, headaches, infertility, and rheumatism. Leaves and twigs of mistletoe are used in herbal remedies, but the berries are highly poisonous.

Popularized in the 1920s by Rudolf Steiner, an Austrian philosopher, mistletoe extracts are used to treat cancer in some countries in Europe, where the plant has been used as a folk treatment for many centuries. The extracts are also used to treat AIDS, hepatitis, and degenerative joint disease.

Of the several hundred species of mistletoe, European mistletoe is the most studied. Preclinical studies indicate its anticancer properties. Data from clinical studies suggest that mistletoe therapy may improve symptoms and quality of life in patients with cancer, but definitive information on these benefits is still lacking.

Oral preparations of mistletoe are available as dietary supplements and homeopathic remedies. The injectable forms are currently used in many mainstream European clinics, typically in conjunction with chemotherapy. However, mistletoe injections have not been approved for medical use by the U.S. Food and Drug Administration (FDA). 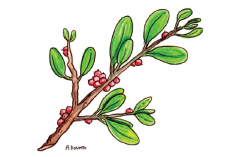 Furthermore, mistletoe injections attenuated airway inflammation and eosinophil infiltration,6 and an injectable form of mistletoe lectins reduced the frequency and intensity of clinical signs and symptoms of hepatitis C in animal models.7

A few studies in humans support the use of mistletoe for supportive care in patients with cancer to improve symptoms, reduce chemotherapy and radiotherapy side effects, and prolong survival.1,10,11 Mistletoe also improved cancer treatment–related toxicities in patients with advanced non–small cell lung cancer11 and colorectal cancer12 and reduced symptoms and improved quality of life in patients with pancreatic13 and breast14 cancers. However, no significant survival effects were found in older studies for patients with metastatic colorectal cancer,15 melanoma,16 or head and neck cancer.17

Mistletoe inhibits cytochrome P450 3A4 substrates and therefore may affect the intracellular concentration of drugs metabolized by this enzyme.25

For additional information, visit the “About Herbs” website at https://www.mskcc.org/cancer-care/integrative-medicine/herbs/mistletoe-european. ■