On January 14, 2016, the Cancer Survivorship Symposium opened with An Evening for Cancer Survivors and Caregivers, an event featuring networking, a panel discussion, and an open forum to share the challenges of living with or after a cancer diagnosis. The audience included Symposium attendees as well as patients, survivors, caregivers, advocates, and medical professionals in the San Francisco Bay Area. The Cancer Survivorship Symposium, presented for the first time in 2016, was cosponsored by the American Academy of Family Physicians, the American College of Physicians, and the American Society of Clinical Oncology (ASCO).

2015–2016 ASCO President Julie M. Vose, MD, MBA, FASCO, opened the evening by remembering Ellen L. Stovall, FASCO, herself a cancer survivor, who passed away in early January after dedicating over 30 years of her life to patient advocacy. Dr. Vose announced that a new award had been created in Ms. Stovall’s honor: the ­Ellen L. Stovall Award and Lecture for Advancement of Cancer Survivorship Care, to be presented at the 2017 Cancer Survivorship Symposium. 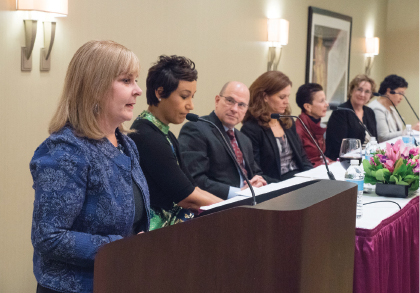 Desirée Rogers was the event’s featured speaker. Ms. Rogers, currently CEO of Johnson Publishing Company (which publishes Ebony and Jet, among others) and Chair of ChooseChicago (the city’s tourism board), has held a number of executive and leadership positions in both the business and philanthropic worlds and served as the White House Social Secretary from 2009 to 2010. She is also Honorary Co-Chair of the Conquer Cancer Foundation of ASCO’s Campaign to Conquer Cancer and a 12-year breast cancer survivor.

Ms. Rogers shared the story of her own cancer experience and the collaborative relationship she forged with her oncologist, Steven T. Rosen, MD, following her unexpected diagnosis with breast cancer at age 40. “I’m not a doctor, but I’m the recipient of some incredible care,” she explained. She expressed that every person living with cancer takes an individual journey and that no one-size-fits-all approach is possible when confronted with cancer; trust and rapport with your oncologist are essential to facing the obstacles ahead.

Other members of the panel gave short presentations on specific aspects of cancer survivorship based on their experience as medical professionals and, in some cases, as cancer survivors themselves.

Two-thirds of people diagnosed with cancer in the United States will survive at least 5 years after their diagnosis, and approximately 13.7 million cancer survivors are alive in the nation today, explained Kevin C. Oeffinger, MD, the session moderator. “Cancer changes your life trajectory—in ways that we understand, and sometimes in ways that we don’t,” he said, introducing the panel discussion and open forum as an opportunity to “wrestle with these complex questions.”

Ann H. Partridge, MD, MPH, FASCO, spoke on psychosocial issues of cancer survivorship. Survivors are sometimes told, explicitly or obliquely, that they should just “be grateful to be alive” and are expected to return immediately to the lives they had prediagnosis. “But when the rug is ripped out from under you, how can you trust the ground again?” she asked. Managing emotional distress “is not just about handholding and hugging,” Dr. ­Partridge said. Anxiety and depression, left untreated, can impede adherence to follow-up care and risk-reduction strategies. It is incumbent on providers to ensure that their patients have adequate resources and emotional support.

Carol A. Rosenberg, MD, FACP, addressed lifestyle factors in the context of survivorship, which can reduce the risk of cancer recurrence, improve overall well-being, and give survivors a feeling of empowerment and participation in their own care. She identified four components as “survivorship vital signs”: moderate therapeutic exercise; a diet rich in fruits and vegetables (and low in red meat and alcohol); maintenance of a healthy body mass index; and adequate sleep. 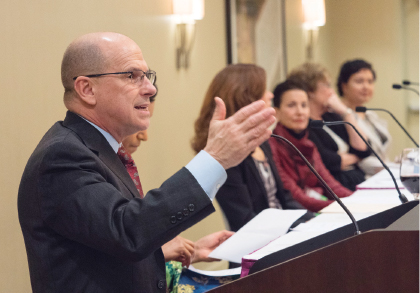 Deborah K. Mayer, PhD, RN, AOCN, FAAN, who is also a breast cancer survivor, outlined the value of a written survivorship care plan detailing a patient’s specific diagnosis, treatments received, and recommended follow-up care. “The time during cancer treatment is so busy. You don’t have time to absorb what you’ve been through,” she said. At the end of active treatment, “you’re left standing there, asking ‘What the hell just happened to me?’” She encouraged survivors to ask for such a plan if they do not receive one at the conclusion of active treatment and noted that digital templates have been created by ASCO and other organizations.

Michelle Quiogue, MD, FAAFP, a family physician and breast cancer survivor, highlighted the importance of primary care providers in cancer survivorship. She described the “long-term healing relationship” that can be achieved with a physician who is familiar with your medical history and family history, “someone who knows you, sees you, and understands you. If you haven’t found that relationship yet, keep looking,” she charged the audience. “There is someone out there for everyone.”

The program concluded with an extended question-and-answer period, during which panel members addressed a wide range of questions and comments posed by members of the audience.

Several questions touched on areas in which more clinical research in survivorship is needed, such as whether cancer therapy can be made less intense or less toxic (yielding fewer side effects and late effects) and whether patients with adult cancers will ever benefit from the same volumes of research that have informed the care of survivors of pediatric cancers.

These kinds of studies are typically not conducted by private companies and rely almost completely on federal funding, Dr. Oeffinger said; thus, they are among the first lines of inquiry to suffer when the National Institutes of Health budget is stagnant. Federal funding for biomedical research is an issue that those affected by cancer should consider when they vote for political representatives.

Many attendees asked questions about symptom management and late effects, including evidence for and anecdotal experience with prescribing medical marijuana. During a discussion on “chemobrain,” several panel members encouraged those experiencing cognitive changes after treatment to speak with their physicians. A common recommendation was to avoid multitasking.

“I can only do one thing at a time… that’s not a bad thing. Giving your full attention to [the person] you’re talking to is not a bad thing. I think my patients benefit from my lack of multitasking now, [as well as] my husband and my kids,” Dr. Quiogue said. 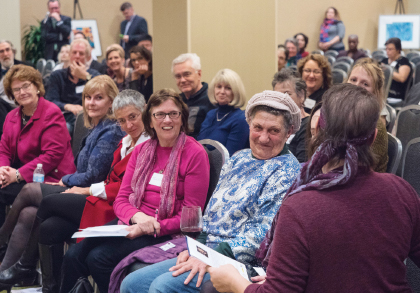 Attendees engage in discussion during an open question-and-answer segment.

The final question raised during the event was how to find the right oncologist and develop the affinity that Ms. Rogers described during her talk. The panel suggested several strategies: reach out to your network for recommendations for physicians; interview more than one doctor if you are able; bring a trusted friend or family to an appointment to help advocate for you and give a perspective check; and look for a doctor who has evident passion for his or her work.

“It’s a privilege to take care of patients,” Dr. Partridge said, and patients should see that reflected in a sense of “respect, partnership, openness, and trust” with their oncologist. ■

An Evening for Cancer Survivors and Caregivers was made possible by the Conquer Cancer Foundation of ASCO. The event was presented by ASCO, in collaboration with CancerCare, Cancer Support Community, LIVESTRONG, and the National Coalition for Cancer Survivorship.