We think the results are intriguing, but larger studies are needed. Four organizations worldwide have developed or are developing clinical trials of adjuvant radiation therapy with or without chemotherapy.

Adjuvant sequential chemotherapy plus radiation therapy and adjuvant radiation therapy alone significantly improved local tumor control compared with adjuvant chemotherapy alone in locally advanced bladder cancer but the improvement in disease-free survival (3-year disease-free survival of 68% vs 56%, P = .10) was statistically marginal, according to the results of a three-arm randomized trial presented at the 2016 Genitourinary Cancers Symposium.1

“Postoperative radiation is known to improve local control, and evidence from Egypt suggests that it can improve survival, while the benefit of postoperative chemotherapy is controversial,” said presenting author Brian Baumann, MD, a radiation oncology resident at the University of Pennsylvania, Philadelphia. Mohamed S. ­Zaghloul, MD, of the National Cancer Institute, Cairo, Egypt, is the lead author of this study.

The study enrolled 198 patients with bladder cancer treated between 2002 and 2008 at the National Cancer Institute in Cairo. Investigators at the University of Pennsylvania partnered with the principal investigator to assist with the analysis.

Patients were treated with radical cystectomy and pelvic node dissection with negative margins and had at least one high-risk feature for local failure (ie, pT3b disease or higher, grade 3 tumors, or positive lymph nodes). Patients were younger than age 70, had an adequate Eastern Cooperative Oncology Group performance status, and adequate organ function. Patients with evidence of distant metastasis or second malignancies were excluded.

The median age was 54 years; 53% had urothelial carcinoma, and 41% had squamous cell carcinoma. The median follow-up was 19 months.

For the initial randomization, the 3-year disease-free survival was 68% for the chemoradiotherapy arm vs 63% for the radiation therapy arm—a 5% difference that favored combined therapy but was not statistically significant. Freedom from local disease-free recurrence was 96% at 3 years with chemoradiotherapy vs 87% for radiation alone—a difference that was also not statistically significant.

Distant metastasis-free survival at 3 years was 73% for chemoradiotherapy vs 72% for radiation therapy alone, which was statistically nonsignificant. Three-year overall survival was 64% vs 48%.

Also, it is not clear to what extent these results are applicable to North America because of the heterogeneity of bladder cancer in the Middle East.

“We think the results are intriguing, but larger studies are needed. Four organizations worldwide have developed or are developing clinical trials of adjuvant radiation therapy with or without chemotherapy, including the currently accruing NRG trial, NRG-GU001,” said Dr. Baumann. ■ 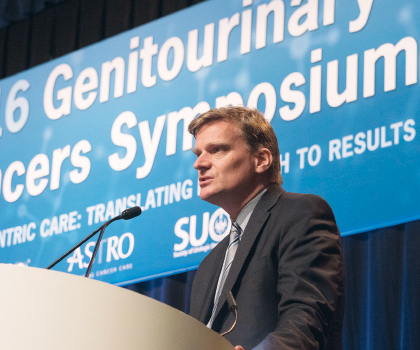 The Egyptian study presented by Brian Baumann, MD, of the University of Pennsylvania, Philadelphia, was a “valiant effort” to determine whether sequential adjuvant chemotherapy added to adjuvant radiation would improve disease-free survival, said formal discussant of this trial Elizabeth Plimack,...