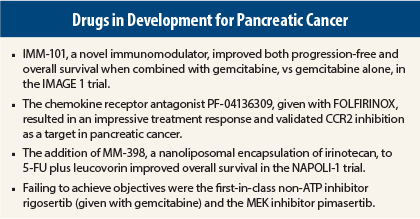 Drugs in Development for Pancreatic Cancer

This proof-of-concept study has exceeded its objectives, providing clear direction for the further development of IMM-101, in combination with chemotherapy, as a first-line treatment option for metastatic pancreatic cancer.

Pimasertib plus gemcitabine did not improve outcomes for patients with pancreatic cancer, compared with gemcitabine alone, which is consistent with findings for other MEK inhibitors.

Targeting one of the deadliest cancers and seeking to fill an unmet need, drug development in pancreatic cancer is an area of high interest. This was certainly the case at the 2015 Gastrointestinal Cancers Symposium, where results were impressive for some novel agents but disappointing for several others.

IMM-101 is a bacterially derived systemic immunomodulator given intradermally. In the IMAGE 1 trial, patients received up to 15 injections of IMM-101 over a maximum period of 12 cycles alongside ­gemcitabine.

The combination was associated with consistent and significant improvements in overall survival and progression-free survival, in both the intent-to-treat and per-protocol analyses. Improvements were most notable in the predefined subgroup of patients with metastatic disease (84% of the total). In the per-protocol analysis of this subgroup, median overall survival was 7.5 months, vs 4.4 months with gemcitabine alone (hazard ratio = 0.46, P = .002), and median progression-free survival was 4.4 months, vs 2.3 months (hazard ratio = 0.40, P < .001), reported Angus G. Dalgleish, MD, St. George’s University of London.

These differences represent increases of 70% in overall survival and 91% in progression-free survival. Differences in the intent-to-treat analyses were also statistically significant in the metastatic subgroup, he said.

“This randomized, controlled, proof-of-concept study has exceeded its objectives, providing clear direction for the further development of IMM-101, in combination with chemotherapy, as a first-line treatment option for metastatic pancreatic cancer,” Prof. Dalgleish said. “No additional burden of adverse events above those related to chemotherapy or the underlying disease was observed,” he said. The study is ­ongoing.

The study enrolled patients with borderline resectable or locally advanced pancreatic cancer who received FOLFIRINOX alone or with PF-04136309 for six cycles. Of 29 evaluable patients receiving the combination, 14 (48.3%) had tumor shrinkage of at least 30%. Sequential biopsies showed that protumoral cytokines in the microenvironment were upregulated with ­FOLFIRINOX alone but were suppressed with the combination.

The combination of rigosertib plus gemcitabine failed to demonstrate an improvement in survival or response, compared with gemcitabine alone, in an international randomized study.4 Rigosertib is a first-in-class non-ATP inhibitor of the Ras binding site on downstream effector proteins, including Raf and PI3K, and has shown efficacy in preclinical models.

Partial responses were observed in 19% on the combination and 13% receiving gemcitabine alone. Mutational analysis was performed on 47 samples, of which 41 were positive for mutations (KRAS, PI3K, p53), but no differences in outcomes emerged by mutational status.

There was no difference in median progression-free survival between the arms, and in a preliminary analysis, overall survival was also similar. Disease control was numerically higher with the combination (61.4% vs 45.5%), but the response rates were similar.

“Pimasertib plus gemcitabine did not improve outcomes for patients with pancreatic cancer, compared with gemcitabine alone, which is consistent with findings for other MEK inhibitors,” Dr. Van Cutsem said. “The primary endpoint was not met, and assessment of secondary endpoints suggests that there is no clinically meaningful difference between the treatment arms.” ■