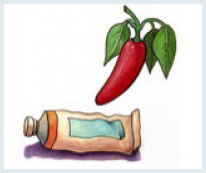 The ASCO Post’s Integrative Oncology series is intended to facilitate the availability of evidence-based information on integrative and complementary therapies commonly used by patients with cancer. We chose capsaicin for this issue because of its increasing use as a pain reliever by cancer patients.

Capsaicin is a colorless, pungent ingredient found in cayenne pepper, a shrub that originated in Central and South Americas and is now cultivated in many tropical and subtropical climates. An important spice in many cuisines around the world, including Creole, Cajun, Mexican, Asian, and Southern Italian, cayenne pepper is valued in Ayurvedic and Chinese medical systems as a remedy for digestive and circulatory problems, poor appetite, and muscle and arthritic pain.

Today, topical capsaicin is used to treat pain associated with osteoarthritis, rheumatoid arthritis, mastectomy, postherpetic neuralgia, and diabetic neuropathy and to reduce the severity of psoriasis and pruritus.

Capsaicin has been studied in oral and topical forms. Current evidence suggests utility of topical capsaicin in controlling postoperative pain in cancer patients. However, data are limited to assess its effectiveness for arthritic pain and neuropathic pain associated with AIDS, diabetes, and mastectomy.

Capsaicin is marketed in capsule form and as an ingredient in topical creams, gels, and lotions. Prescription-strength dermal capsaicin products are available for the management of pain.

Capsaicin is believed to cause depolarization of C-fiber polymodal nociceptors, thereby releasing substance P, a neurotransmitter that relays pain signals to the brain. Following application of capsaicin, the sensation of pain increases due to release of substance P but subsides when its levels are depleted at the afferent neurons.1, 2

Topical capsaicin has been shown to be effective against psoriasis,3 prurigo nodularis,4 pruritus ani;5 a dermal capsaicin patch was found to be safe and effective for the treatment of postherpetic neuralgia.6 In another study, a combination of capsaicin and isoflavone improved hair growth in healthy volunteers with alopecia.7 Furthermore, capsaicin in intranasal form was shown to improve nasal congestion and sinus pain associated with nonallergic rhinitis.8

Data also indicate that capsaicin cream can control postoperative pain in cancer patients,9 but it was ineffective against distal symmetric peripheral neuropathy associated with AIDS.10 Capsaicin’s value in alleviating arthritic pain has not been fully established.11,12 A review of studies of capsaicin for neuropathic pain associated with HIV, diabetes, and mastectomy concluded that available data preclude full assessment of its benefits and that additional well-designed clinical trials are needed.13

Capsaicin, reported to have carcinogenic effects,14 was shown to be safe in a study of mice.15 Interestingly, studies following this observation found that capsaicin exerted chemopreventive properties.16,17 Proposed mechanisms of action include induction of apoptosis,18 inhibition of epidermal growth factor–induced invasion, and migration of tumor cells.19 A case report of a patient with prostate cancer showed that capsaicin may slow the doubling time of prostate-specific antigen (PSA).20

Cases of serious burns have occurred after the use of over-the-counter topical  products. In some cases, hospitalization was required.23