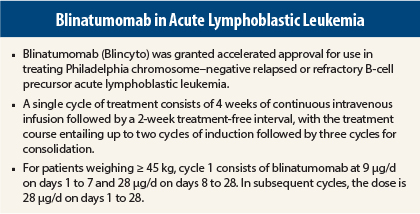 On December 3, 2014, blinatumomab (Blincyto) was granted accelerated approval for use in treating Philadelphia chromosome–negative relapsed or refractory B-cell precursor acute lymphoblastic leukemia (ALL).1,2

Approval was based on results of a single-arm trial in 185 patients showing achievement of durable complete remission/complete remission with partial hematologic recovery. Blinatumomab was administered by continuous infusion for 4 weeks of a 6-week cycle. In the first cycle, the initial dose was 9 µg/d for week 1, then 28 µg/d for the remaining 3 weeks. The target dose of 28 µg/d was administered in cycle 2 and subsequent cycles starting on day 1 of each cycle.

Among treated patients, the median age was 39 years (range, 18–79 years), 34% had undergone hematopoietic stem cell transplantation prior to receiving blinatumomab, and 17% had received more than two prior salvage therapies.

The agent mediates formation of a synapse between the T cell and the tumor cell, upregulation of cell adhesion molecules, production of cytolytic proteins, release of inflammatory cytokines, and proliferation of T cells, resulting in redirected lysis of CD19-positive cells.

As emphasized in the labeling, “It is very important that the instructions for preparation (including admixing) and administration … are strictly followed to minimize medication errors (including underdose and overdose).” The U.S. Food and Drug Administration approval of blinatumomab comes with a Risk Evaluation and Mitigation Strategy (REMS), consisting of a communication plan to inform health-care providers about the serious risks and the potential for preparation and administration errors.

Safety was evaluated in 212 patients with B-cell precursor relapsed/refractory ALL who received at least one dose of blinatumomab. Patients had a median age of 37 years (range, 18–79 years), 63% were male, and 79% were white, 3% were Asian, and 3% were black or African American.

Blinatumomab carries boxed warnings for cytokine-release syndrome and neurologic toxicity, both of which may be severe, life-threatening, or fatal. It also carries warnings/precautions for infections, effects on ability to drive and use machines, and preparation and administration errors. ■

Health-care professionals should report all serious adverse events suspected to be associated with the use of any medicine or device to FDA’s MedWatch Reporting System by completing a form online at www.fda.gov/medwatch/report.htm, by faxing (800-FDA-0178), by mailing the postage-paid address form provided online, or by telephone (800-FDA-1088).