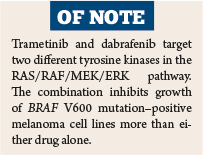 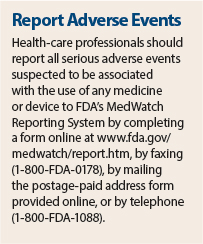 On January 9, 2014, the combination of trametinib (Mekinist) and dabrafenib (Tafinlar) was granted accelerated approval for the treatment of patients with unresectable or metastatic melanoma with BRAF V600E or V600K mutations as detected by a U.S. Food and Drug Administration (FDA)-approved test.1,2 The approval of the combination is based on demonstration of durable response rate. Improvements in disease-related symptoms and overall survival have not yet been shown for the combination. Both drugs were approved for use as single agents in this setting in May 2013.

Approval of the combination is based on findings in an open-label trial in which 162 patients with no prior exposure to BRAF or MEK inhibitors were randomized to receive trametinib at 2 mg (n = 54) or 1 mg (n = 54) orally once daily plus dabrafenib at 150 mg orally twice daily or dabrafenib at 150 mg alone (n = 54).1-3 Patients had a median age of 53 years, 57% were male, > 99% were white, 66% had Eastern Cooperative Oncology Group performance status of 0, 67% had M1c disease, 54% had normal lactate dehydrogenase levels, 8% had a history of brain metastases, and 81% had not received prior therapy for unresectable or metastatic disease; 85% had BRAF V600E mutations and 15% had BRAF V600K mutations.

Trametinib and dabrafenib target two different tyrosine kinases in the RAS/RAF/MEK/ERK pathway. Use of trametinib and dabrafenib in combination resulted in greater growth inhibition of BRAF V600 mutation–positive melanoma cell lines in vitro and prolonged inhibition of tumor growth in BRAF V600 mutation–positive melanoma xenografts compared with either drug alone.

Dabrafenib is an inhibitor of some mutated forms of BRAF kinases, and some mutations in the BRAF gene, including those that result in BRAF V600E, can result in constitutively activated BRAF kinases that stimulate tumor cell growth. Dabrafenib inhibits BRAF V600 mutation–positive melanoma cell growth in vitro and in vivo.

How the Combination Is Used

The recommended dose of the combination is trametinib at 2 mg once daily and dabrafenib at 150 mg twice daily, taken at least 1 hour before or 2 hours after a meal.

Concurrent administration of strong inhibitors of CYP3A4 (eg, ritonavir, clarithromycin, ketoconazole) or CYP2C8 (eg, gemfibrozil) and strong inducers of CYP3A4 (eg, carbamazepine, phenobarbital, St. John’s wort) or CYP2C8 (eg, rifampicin) should be avoided when trametinib and dabrafenib are used in combination. Concomitant use of the combination with agents that are sensitive substrates of CYP3A4, CYP2C8, CYP2C9, CYP2C19, or CYP2B6 (eg, tacrolimus, imatinib, anastrozole, paclitaxel, sorafenib), may result in loss of efficacy of these agents.

Serious side effects included bleeding, clot formation, heart failure, skin problems, and eye problems. The development of a new squamous cell carcinoma of the skin, a known adverse effect of dabrafenib, was reduced from 19% in the dabrafenib-alone group to 7% in the combination group.