Mortality rates for breast cancer have declined steadily in the United States since 1990, resulting in an improvement in survival. Multiple factors have contributed to this positive trend, one of which is the combination of earlier detection and more sophisticated surgical techniques. The ASCO Post recently spoke with internationally regarded breast cancer surgeon Monica Morrow, MD, FACS, Chief, Breast Service Department of Surgery, Memorial Sloan-Kettering Cancer Center, about the current state of breast cancer surgery.

The margin debate was more important 20 years ago, when surgery was the primary method for local control. What we have learned in the past couple of decades is that the availability of effective systemic therapies dramatically reduces risk of local recurrence in the preserved breast.

And to believe that one can precisely measure the difference between 1 and 2 mm in a margin is somewhat laughable. There is no standardization of pathology protocols across the United States in terms of how many sections are taken to look at the margin. The breast is fatty tissue that gets smashed flat when it gets to the pathologist, so some margins are made smaller by that flattening process, and some may actually increase. There are many variables, and there is no definition of a single surgical margin width that is appropriate for all women with breast cancer once you get past “no tumor” on the ink.

Moving to another clinical debate, do we have clear evidence in how sentinel node biopsy influences the decision for axillary dissection?

A clinical decision after a positive sentinel node on biopsy is not as evident. Can you clarify that debate?

The big debate centers on the following question: Does a positive sentinel lymph node biopsy indicate the need to do an axillary dissection for every patient? This issue became a controversy because in about 70% of women, the sentinel node is the only node in the axilla with cancer. We no longer use the number of involved lymph nodes to choose systemic therapy; it is enough to know that a node is involved, and in many cases that’s not even the deciding factor for systemic therapy or for selecting the type of systemic therapy. The question then becomes: Does doing an axillary dissection contribute to survival, and is it necessary for local control?

Do we have any data to address that question?

That was the question that the American College of Surgeons Oncology Group (ACOSOG) Z11 study sought to answer. ACOSOG Z11 was a prospective randomized trial of axillary dissection vs no further axillary surgery in women undergoing lumpectomy and whole-breast radiation who were found to have three or fewer positive sentinel nodes.

On the other hand, some of these women do require axillary dissection, and they are those not included in the trial such as those who had mastectomy, preoperative chemotherapy, more advanced breast cancer, or grossly abnormal positive lymph nodes, and women who were not getting whole-breast irradiation. The Z11 results should not be extrapolated to these groups, and these women continue to require axillary dissection for positive sentinel nodes.

Did the results of Z11 have any effect on clinical practice? 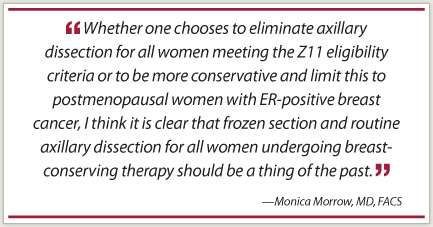 At Memorial Sloan-Kettering, we have adopted a policy for women who meet the eligibility criteria for the Z11 trial: We no longer perform axillary dissection in this group. We’ve been using that clinical policy for about a year now. It is considered fairly radical, and some in the community have expressed concerns that because most of the women in the Z11 trial were estrogen receptor (ER)-positive, the results only apply to that group of women and maybe also don’t apply to younger women.

However, ER positivity and age are not predictors of the risk of recurrence in lymph nodes, so we don’t think that that is a particularly relevant argument. And most patients with breast cancer are ER-positive and most tend to be older women. That said, we are prospectively keeping track of the outcomes of our patients, and after we have a longer follow-up we will report the findings. Whether one chooses to eliminate axillary dissection for all women meeting the Z11 eligibility criteria or to be more conservative and limit this to postmenopausal women with ER-positive breast cancer, I think it is clear that frozen section and routine axillary dissection for all women undergoing breast-conserving therapy should be a thing of the past.

Do we have a precise definition of women who would best be treated with mastectomy or lumpectomy?

There are criteria to determine which women need mastectomy. If women have multicentric breast cancer, if we cannot get a negative margin around the cancer with a satisfactory cosmetic outcome, or if the mammographic picture is confusing, presenting with such widespread abnormal microcalcifications that we can’t reliably exclude the presence of cancer, then mastectomy is indicated. The other reason for mastectomy is if we can’t safely deliver radiotherapy, for instance, if the patient has already had irradiation that involved the breast as part of prior cancer treatment. The remaining women are eligible for breast-conserving surgery.

Thirty years ago, women were the primary drivers of the movement to scientifically study breast-conserving surgery, contending that mastectomy was a mutilating procedure and demanding other options. Interestingly, today it’s women themselves who often elect to have a mastectomy even though they are eligible for lumpectomy, and even in the face of evidence showing that survival after lumpectomy has never been better. Further, the risk of local recurrence has declined significantly since the initial randomized trials. Many choose mastectomy not only in the affected breast, but also in the healthy breast. And this phenomenon is more frequent among younger women.

What have been the major advances in breast cancer surgery to occur during your career? 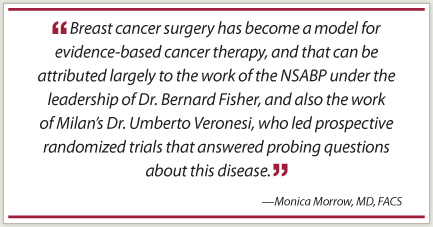 Breast cancer management has undergone dramatic change since I began my career. When I was a medical student and junior resident, we were still arguing about whether it was safe to get rid of the radical mastectomy. We did not have effective endocrine therapy, so we performed surgery for endocrine ablation—removing the ovaries and adrenal and pituitary glands—which certainly had unpleasant side effects.

Since then, we have progressed to an era in which breast cancer surgery is an outpatient procedure. Lumpectomy and sentinel node biopsy is an hour-long operation. Women can be back to their regular activities in a few days. Coupled with the enormous advances in drug therapy, breast cancer survival has markedly improved. The morbidity of treatment has decreased significantly, and so has the death rate.

Breast cancer surgery has become a model for evidence-based cancer therapy, and that can be attributed largely to the work of the National Surgical Adjuvant Breast and Bowel Project (NSABP) under the leadership of Dr. Bernard Fisher, and also the work of Milan’s Dr. Umberto Veronesi, who led prospective randomized trials that answered probing questions about this disease. ■