Is Gemtuzumab a Therapeutic Option in Older Patients with Acute Myeloid Leukemia?

A study presented at the Plenary Session of the 53rd Annual Meeting of the American Society of Hematology (ASH) breathes new life into an older drug for acute myeloid leukemia (AML) that is no longer available in the United States.1 Gemtuzumab ozogamicin (Mylotarg) appears to be a promising therapeutic option for older patients with acute myeloid leukemia with favorable cytogenetics when used in relatively low, frequently repeated doses, according to results of the Acute French Leukemia Association (ALFA) phase III trial.

“Research has demonstrated that [gemtuzumab] has very potent anticancer properties, and with this study, we have identified a dosing regimen that gives patients the therapeutic benefit of the drug without some of the toxicities reported at higher doses,” stated lead author Sylvie Castaigne, MD, Professor in the Department of Hematology at Hôpital de Versailles, Versailles, France. “The standard of care has been daunorubicin plus cytarabine for many years. There hasn’t been a new therapeutic option for several decades, and with this research we are encouraged that [gemtuzumab] may be able to improve overall outcomes for these AML patients with limited alternatives.”

Gemtuzumab was withdrawn from the U.S. market in June 2010, after a clinical trial demonstrated that the drug increased mortality and added no benefit over conventional therapies for AML.

The phase III, prospective, open-label, randomized trial enrolled 280 newly diagnosed de novo AML patients aged 50 to 70 years. A regimen of 3 mg/m2 gemtuzumab IV on days 1, 4, and 7 was designed to give lower but repeated doses that might enhance gemtuzumab’s efficacy and minimize hepatic and hematologic toxicities reported earlier with this antibody. Patients were randomly assigned to arm A (standard daunorubicin plus cytarabine) or arm B (the same chemotherapy plus the gemtuzumab regimen). Those who achieved remission on two cycles of treatment received two courses of consolidation therapy with the same treatments. Patients with persistent bone marrow blasts at day 15 after the first induction course received a second cycle of treatment, which was given without additional doses of gemtuzumab. 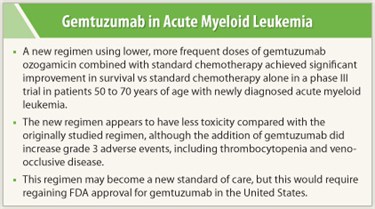 Improvement in event-free and overall survival was not observed in the subset of patients with unfavorable cytogenetics, Dr. Castaigne said. The rate of fatal events was higher in the experimental arm: 6.7% with standard therapy vs 8.7% in the arm that included gemtuzumab. In the experimental arm, prolonged grade 3 thrombocytopenia was reported in 19 patients and veno-occlusive disease or sinusoidal obstructive syndrome was seen in 3 patients (2 cases were fatal). No differences were observed between the two treatment arms in the rate of severe sepsis or intensive care admission during therapy. ■

Disclosure: Sylvie Castaigne received consultant fees from Wyeth from 2006 to 2008.

Expert Point of View: Is Gemtuzumab a Therapeutic Option in Older Patients with Acute Myeloid Leukemia?

Expert Point of View: Is Gemtuzumab a Therapeutic Option in Older Patients with Acute Myeloid Leukemia?

Previous studies of gemtuzumab ozogamicin (Mylotarg) had variable results in acute myeloid leukemia (AML). Before trials reported at the 2011 ASH Annual Meeting, two major studies had compared chemotherapy with or without gemtuzumab in patients with AML, said Martin Tallman, MD, Chief of the...