In findings likely to intensify the debate about the role of bevacizumab (Avastin) in advanced breast cancer, the AVEREL trial concludes that adding this antiangiogenic antibody to standard therapy prolongs progression-free survival by about 3 months in women with HER2-positive locally recurrent or metastatic breast cancer. Results of the randomized phase III trial were presented at the 2011 San Antonio Breast Cancer Symposium.1

The 424 women being treated in the first-line setting had better median progression-free survival as assessed by investigators—the trial’s primary endpoint—with addition of bevacizumab to docetaxel and trastuzumab (Herceptin) than without its addition (16.5 vs 13.7 months), although the difference did not attain statistical significance, lead investigator Luca Gianni, MD, reported. The difference was significant, however, as assessed by an independent review committee, a step taken to comply with FDA’s criteria of assessment.

Overall survival did not differ between groups, but follow-up is not yet mature for this outcome, according to Dr. Gianni, who is Director of Medical Oncology at the San Raffaele Cancer Center in Milan, Italy.

An additional, exploratory finding was that among the roughly one-third of patients having biosamples, adding bevacizumab seemed to yield greater benefit in patients who had higher circulating levels of vascular endothelial growth factor A (VEGF-A) at baseline. 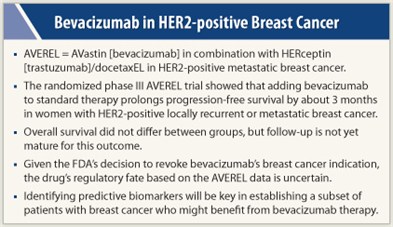 “The most relevant element emerging from our trial is that bevacizumab is doing something in this group of women also, as in the HER2-negative subset of cases [in previous trials], but that we need to invest more in trying to figure out which subgroup of HER2-positive disease really deserves the addition of yet another drug with a different mechanism of action, such as bevacizumab,” he said. “A global biomarker study known as MERiDian is planned to treat patients with bevacizumab and paclitaxel, with stratification by plasma VEGF-A level, to validate prospectively the meaning of this marker.”

Given that the FDA recently revoked its approval of bevacizumab for breast cancer treatment, the drug’s regulatory fate based on the AVEREL data is uncertain, Dr. Gianni said. “According to the FDA suggestions and the general indications, the endpoint that they would look at has been met. But the [manufacturer’s] decision as to whether to try to get a label for HER2 will have to consider the extent of benefit and the large number of therapeutic options already available for women with HER2-positive metastatic breast cancer,” he elaborated.

The AVEREL results give “more fodder for the controversy,” commented Lisa Carey, MD, ScM, Professor in the Department of Medicine, University of North Carolina at Chapel Hill, in a related press conference. Other bevacizumab trials in breast cancer have shown a consistent pattern: improvements in response rate and progression-free survival, but not overall survival, “and I suspect in the end, this will be the same.”

The debate as to what should be the definitive endpoint for approval is “a very valuable one,” she said. “I am a little bit concerned that in breast cancer, because of its heterogeneity and because of the number of drugs that we give to patients over the course of their metastatic disease, the introduction of a lot of noise may mask effects that a very tightly controlled study might see.... On the other hand, it would be nice to see some hint of a survival advantage.”

At the end of the day, having access to bevacizumab, at least for a subset of patients, would be helpful, according to Dr. Carey.

Gabriel Hortobagyi, MD, Chair of Breast Medical Oncology at The University of Texas MD Anderson Cancer Center in Houston, stressed that identifying predictive biomarkers will be key here. “We do not have a biomarker to tell us that we can treat less than 100% of patients to observe the benefit,” yet bevacizumab almost certainly improves outcomes in only some, he said. “That is an ongoing challenge, and we really need to invest in that and redouble our efforts so that we can develop those biomarkers.”

The drug still has a role in breast cancer, Dr. Hortobagyi agreed. “Bevacizumab in my book is alive and well: I continue to treat patients with bevacizumab in my clinic, and we continue to run clinical trials that include bevacizumab,” he said. “I have gone public several times criticizing the decision of the FDA, although I understand the challenges they face in making these decisions.”

Women were eligible to participate in the AVEREL trial if they had previously untreated HER2-positive locally recurrent or metastatic breast cancer. They were assigned 1:1 to receive docetaxel plus trastuzumab, either with or without added bevacizumab, with all agents given every 3 weeks. The trial did not permit crossover.

The women had a median age of about 54 years. Slightly more than half had hormone receptor–positive tumors, and about three-fourths had visceral disease. Only a minority had received adjuvant or neoadjuvant HER2-targeted therapy (13%), anthracyclines (44%), and taxanes (18%). The median duration of follow-up was 26 months.

Main results showed that median progression-free survival was marginally better with added bevacizumab than without it as assessed by investigators (16.5 vs 13.7 months; HR = 0.82; P = .08) and significantly better as assessed by the independent review committee with censoring of patients for nonprotocol therapy (16.8 vs 13.9 months; HR = 0.72; P = .02).

The findings were similar across most subgroups, except for notably greater benefit of added bevacizumab among patients aged 65 years or older and patients with measurable disease. The objective response rate was significantly higher in the bevacizumab group as assessed by the independent review committee (77% vs 66%).

“There were no new safety signals observed in this patient population with respect to what we already know from other patient populations exposed to [bevacizumab],” Dr. Gianni reported. The rate of grade 3 or higher adverse events of special interest, such as hypertension and cardiac events, was 48% with bevacizumab and 38% without it.■