Benefits of Some Bisphosphonates Confirmed in Breast Cancer Outcomes, but Questions Remain

The story of bisphosphonates, and their disease-modifying potential in breast cancer, is still evolving. While some studies presented at the 2011 San Antonio Breast Cancer Symposium failed to show gains, others found benefits. The theme that is emerging is that bisphosphonates may be most beneficial in patients with low estrogen levels (eg, due to ovarian suppression or being greater than 5 years postmenopause).

Premenopausal women with estrogen receptor (ER)-positive early breast cancer who are receiving goserelin (Zoladex) plus tamoxifen or anastrozole might benefit from the addition of zoledronic acid, according to long-term follow-up of the phase III Austrian Breast and Colorectal Cancer Study Group trial (ABCSG-12) of 1,803 patients.1 Anticancer benefits were confirmed after a median follow-up of 7 years, particularly in patients with a “low-estrogen environment,” reported Michael Gnant, MD, of the Medical University of Vienna.

Patients were randomly assigned to goserelin/tamoxifen or goserelin/anastrozole for 3 years with or without zoledronic acid (4 mg every 6 months). The addition of zoledronic acid significantly improved both disease-free survival (HR = 0.72; P = .01) and overall survival (HR = 0.63; P = .049). The effect was mostly driven by the subset of patients over 40 years old, which is consistent with data from the ZO-FAST trial (see below) as well as a subset analysis from the AZURE trial showing a disease-free survival benefit in patients who were postmenopausal for more than 5 years (HR = 0.75; P = .02).2

Zoledronic acid reduced recurrences at all sites, not just bone, and there were no reports of osteonecrosis of the jaw or renal failure.

“The disease-free survival benefits of adjuvant zoledronic acid, first observed at 48 months, are maintained at 84 months, up to 4 to 5 years post-treatment, and now extend to overall survival, which is increased by 37%, suggesting a sustained anticancer effect,” Dr. Gnant commented. “This is exciting news for our patients.”

The primary endpoint of disease-free survival was not met for the National Surgical Adjuvant Breast and Bowel Project (NSABP) B-34 trial of 3,200 postmenopausal women with early breast cancer randomly assigned to 3 years of oral clodronate (1,600 mg/d) or placebo, plus adjuvant chemotherapy and/or tamoxifen, reported Alexander Paterson, MD, of the University of Calgary, Alberta, Canada.4 He noted, however, that 40% of patients did not complete 3 years of clodronate. 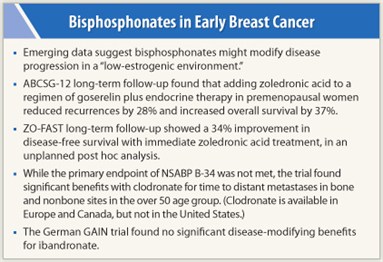 Although the study failed to show a disease-free survival benefit in the overall patient population (HR = 0.91; P = .27), a distinct benefit was demonstrated in the subset of those at least 50 years old (similar to the zoledronic acid trials), and clodronate improved the distant metastasis-free interval both in bone and extraskeletal sites. Clodronate is available in Europe and Canada but not in the United States.

Ibandronate (Boniva) also failed to improve disease-free and overall survival when added to a dose-dense regimen of epirubicin, paclitaxel, and cyclophosphamide in the German GAIN trial presented by Volker Möbus, PhD, of Frankfurt, Germany.5 In accordance with the NSABP B-34 study, older patients tended to have better outcomes with ibandronate, though the difference was not statistically significant. ■

Disclosure: Dr. Gnant has received research support from GlaxoSmithKline, sanofi-aventis, Novartis, and Roche; honoraria and travel support from Amgen, Pfizer, Novartis, GlaxoSmithKline, Bayer, Sandoz, AstraZeneca, and Genomic Health; and has served as a consultant to Merrion and Novartis. Dr. de Boer is a member of the Novartis Australian Advisory Board and has received speaker’s honoraria from Novartis.

Expert Point of View: Benefits of Some Bisphosphonates Confirmed in Breast Cancer Outcomes, but Questions Remain

Expert Point of View: Benefits of Some Bisphosphonates Confirmed in Breast Cancer Outcomes, but Questions Remain

James Ingle, MD, of the Mayo Clinic, Rochester, Minnesota, formally discussed the ABCSG-12 and ZO-FAST bisphosphonate studies presented at the 2011 San Antonio Breast Cancer Symposium, noting,  “There is a lot of interest in the effect of bisphosphonates on the tumor microenvironment and the impact ...