Cancer on the Global Stage: Incidence and Cancer-Related Mortality in the Russian Federation

The Russian Federation is the largest country in the world, extending from Eastern Europe to Northern Asia and the Pacific Ocean. The population of more than 140 million people is unevenly distributed across the country.1 As a result, Russia has high spatial inequality in terms of accessibility of primary and specialized medical care. In addition, Russia faces an aging population, with an increase in the old-age dependency ratio (ie, the number of older people at an age when they are generally economically inactive compared with the number of people of working age) from 18% to 23.5% over the past 20 years.1 The general demographic profile of Russia is summarized in Table 1. 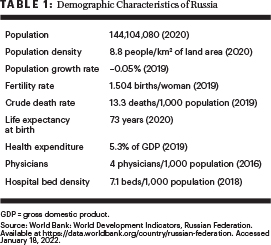 In Russia, national cancer statistics are obtained from regional population–based cancer registries and civil registries, with the former providing data on incidence and the latter, on mortality.2 In 1953, Russia (then part of the Union of Soviet Socialist Republics) introduced mandatory cancer registration. However, it was only in the late 1990s that regional population–based cancer registries, which collect and store individual-level data, were fully established on a national scale. As a result, national cancer incidence data are available from 1993, whereas cancer-related mortality can be traced back to the early 1960s.

The increasing cancer incidence trends in Russia reflect the growing burden of risk factors and, more recently, the enhanced availability of diagnostic services. In 2019, according to the National Cancer Report, there were more than 291,000 new cancer cases in men and 348,000 in women. The predicted trends show that, without intervention, cancer incidence in Russia is expected to rise almost 13% in the next few decades (Figure 1).

The latest available data show that, in 2020, the most common cancer by incidence in Russia was colorectal cancer, followed by breast cancer and lung cancer (Figure 2). Incidence rates of colorectal cancer have consistently increased over the past 3 decades (from 16.9 to 24.3 per 100,000 women and 22.7 to 35.3 per 100,000 men between 1993 and 2019), reflecting changes in the prevalence of risk factors, an aging population, and the availability of diagnostic services in Russia. On the other hand, the incidence rate of gastric cancer has declined for both men and women due to a combination of improved sanitary conditions and a possible decrease in the prevalence of Helicobacter pylori infection.3

Despite the initial overall modest levels of cervical cancer burden, the incidence rates have uniformly increased over the past 3 decades from 10.6 to 15.6 per 100,000. Cervical cancer is currently one of the most common cancers diagnosed in women younger than age 45. In contrast to most European countries, the incidence of lung cancer in women remains low, possibly reflecting the low prevalence of tobacco smoking.5 Cancer remains one of the leading causes of death in Russia, second only to deaths from cardiovascular diseases. In 2019, more than 158,000 men and 136,000 women died of cancer. Cancer-related mortality peaked in Russia in 1993 to 1994, after which there has been a steady decline in deaths related to cancer.

A national health checkup, or “dispensarization,” program was initiated in 2013 and includes several diagnostic tests for cancer screening (eg, mammography, cervical cytology, fecal occult blood test, prostate-specific antigen test). These tests are performed in nononcologic health-care clinics. Despite the lack of quality control, recent period changes in cancer incidence can likely be attributed to this program. The effect on cancer mortality has not yet been apparent and should be studied using individual-level data.

Apart from unhealthy behavior, the reasons for less-than-optimal population health may lie in the health-care system’s suboptimal financing and inefficient resource allocation. The total health-care expenditure was 5.3% of the gross domestic product,1 which is much less than the Organisation for Economic Co-operation and Development average. The share of voluntary health insurance is minimal, and private health-care expenditures are primarily out-of-pocket. 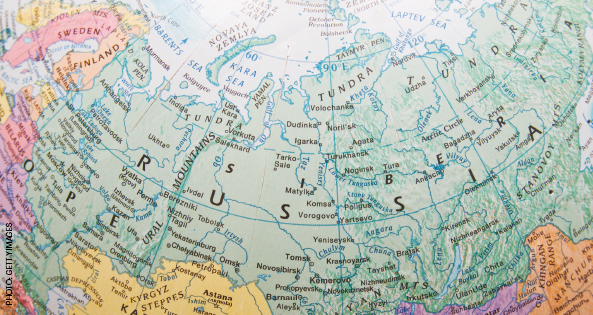 In Russia, “oncology” is designated as a specialty that includes physicians practicing medical, surgical, and radiation oncology. Training typically lasts 2 years immediately following medical school, with an additional 4-month course recommended for a radiation oncologist. In contrast, countries with a Human Development Index—a summary measure of average achievement in key dimensions of human development: a long and healthy life, being knowledgeable, and having a satisfactory standard of living—require 6 to 9 years of training, depending on the specialty.7

There is also no board certification administered by a professional society that establishes quality standards for the specialties. At the same time, the shortage of oncologists was estimated at about 2,000 physicians. As a result, novel educational initiatives such as the Higher School of Oncology are emerging.8,9 The aims of these initiatives are to introduce the current platforms of modern postgraduate training into the Russian health-care system.

Several federal cancer centers provide the full spectrum of modern cancer care. Many patients travel great distances to receive appropriate cancer care, which partially explains why most cancer surgeries, chemotherapy, and radiation treatments require a hospital stay. An outpatient oncologist, who usually does not participate in the primary treatment, provides the follow-up care in a stand-alone public clinic upon the patient’s discharge from the tertiary care cancer center. In case of a relapse, the oncologist refers the patient back to the tertiary care cancer center for treatment planning at a multidisciplinary team meeting. Whether this general workflow offers high-quality and timely cancer care has yet to be determined.

Investigator-initiated research is rare in Russia. A few original breast cancer clinical trials and a recent colorectal cancer surgery trial are worth mentioning.10,11 Observational studies sometimes make it into international peer-reviewed journals, but most researchers publish in Russian journals. Lack of training in modern epidemiology and biostatistics limits the opportunities to design and conduct population-based studies. The deficiencies in research also contribute to a low adherence to evidence-based medicine in oncology. However, the recent trend to computerize Russian health care may provide valuable real-world, individual-level data to test a wide range of research hypotheses.

The National Cancer Control Plan for 2019 to 2024 calls for a new network of outpatient cancer diagnostic and treatment facilities.12 The initiative aims to shorten the time frames for workup, tackle spatial inequality in terms of the accessibility of cancer care, and provide management and follow-up for patients who do not require hospitalization. It is envisaged that all these initiatives, over a period of time, will improve the cancer care landscape in Russia.

DISCLOSURE: Dr. Barchuk has served as a consultant or advisor to Biocad and MSD. Dr. Raskina, Mr. Tursun-Zade, Ms. Craig, and Dr. Gushchin reported no conflicts of interest. Dr. Are is a board member with Global Laparoscopy Solutions; has received research funding from Pfizer; and has a patent with the University of Nebraska Medical Center for a laparoscopy instrument.