I Credit Cancer Research With Saving My Life

As a two-time cancer survivor, I implore researchers to keep working their magic. There are millions of us counting on you.

In December 2015, I thought I was through with cancer. I was diagnosed with prostate cancer in 2011 after a routine blood test showed that my prostate-specific antigen (PSA) level was high. I underwent prostatectomy, and although it was clear the cancer had breached the capsule of the prostate, for 2 years, my PSA level remained in the normal range. When it steadily started to rise in 2013, my oncologist recommended targeted radiation therapy, which also failed to halt disease progression. I decided to seek a second opinion and had a consultation with an oncologist at a major academic cancer center. 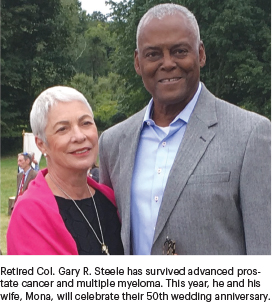 The oncologist said he was enrolling patients with prostate cancer in the MAP clinical trial, which was investigating a commercial preparation of muscadine grape skin extract, and offered me a spot in the study. Excited at the thought of being involved in a clinical trial that could be potentially beneficial to me and other patients in the future, I immediately said yes. I stayed on the study for about a year and left when my PSA level started creeping back up again. My wife, Mona, and I were crestfallen, but our disappointment was short-lived.

I was soon offered another clinical trial studying a combination of the hormonal therapy bicalutamide and quarterly intramuscular injections of leuprolide in patients with advanced prostate cancer. Within 6 months of starting the treatment, my PSA level fell from 6.2 ng/mL to undetectable, where it remains today. I’m still enrolled in the study.

Despite the cancer’s apparent retreat, I knew I wasn’t completely free of the disease. I had accepted the fact that cancer would continue to be a challenge in my life. I just never imagined I would be facing another incurable life-threatening cancer so soon.

I had played varsity football while a cadet at the United States Military Academy at West Point in the mid-1960s and took my share of hits and injuries during games. Pain was a familiar side effect of the sport, but it was nothing compared to the excruciating pain I felt between my shoulder blades 5 decades later as I tried to pull myself out of my home office chair. The sensation was so sharp and unexpected, I thought I had been shot in the back.

Paying Tribute to the Bravery of Clinical Trial Participants

Since my myeloma diagnosis, I’ve been on a combination of drugs that are keeping the cancer stable, including the oral therapy ixazomib plus lenalidomide and dexamethasone, the bone-strengthening drug zoledronic acid, cholestyramine for lower bowel issues, and acyclovir to prevent infection. I expect to be on some type of treatment for the rest of my life, and I’m grateful to be able to utter those words.

Connie had been in an early clinical trial of lenalidomide. Now, I am the beneficiary of her efforts and the efforts of all patients who have participated in cancer clinical trials that have led to advances in treatment. Their bravery has resulted in unprecedented numbers of cancer survivors—more than 17 million this year,1 including me—and I’m paying their kindness forward.

Being a Black man put me at higher risk for prostate cancer and multiple myeloma. I know that minority participation in clinical trials is low, but we all have to do our part to advance cancer cures—not just for ourselves, but for our families, friends, and society as well.

I have also been sounding the alarm about multiple myeloma and insist that my biracial children remain vigilant about undergoing routine blood tests to spot early signs of the cancer, including abnormally high levels of protein, and to maintain their annual cancer screenings.

Coping with two cancers simultaneously initially caused me to become very introspective. I turned inward, chastising myself for all the things I should have accomplished in my life. But now, I’ve turned those negative feelings around. I realize I have a commitment, responsibility, and duty to remain positive for all the people who are very close to me, including Mona, my children, grandchildren, and friends.

This year, Mona and I will be married for 50 years. Despite my cancer diagnoses, my life has been so blessed. I have the love of my family and friends, I have faith, and my life has taken on greater meaning.

I’m grateful there are effective therapies that are keeping my cancers manageable and that are allowing me to live a high-quality life. What I want to say to researchers reading this is, please keep working your magic. There are millions of cancer survivors counting on you.

Retired Col. Steele lives with his wife, Mona, in Carlisle, Pennsylvania. Col. Steele was among the 30 Black students at the U.S. Military Academy in West Point in 1966 and was the academy’s first Black varsity football player.