The gaming community showed their support to the oncology community by donating proceeds throughout a 10th Anniversary celebration of a week-long, 24-hour, speedrunning marathon. The charity event, Awesome Games Done Quick (AGDQ), concluded on January 12, 2020, raising a total of $3.13 million, the most in its 10-year history, with the money being donated to the Prevent Cancer Foundation.

Each year, the gaming group, AGDQ, live-streams hundreds of speedrunners attempting to beat video games as quickly as possible—a task that requires high levels of skill, planning, and precision. This year’s event hosted thousands of people attending in person and hundreds of thousands tuning in online through Twitch, a live-streaming platform for gaming.

In its 9 years supporting the Prevent Cancer Foundation, AGDQ has raised more than $14.4 million to fund research, technology, and community grants both in the United States and internationally, as well as cancer prevention and early detection education and outreach. This year, over 54,000 donations were received from more than 80 different countries.

“It has been a tremendous honor to be a part of the growth of the Games Done Quick community. With their support, the Foundation is able to fund life-saving grants and education in cancer prevention and early detection,” said Jody Hoyos, MHA, Executive Vice President of the Prevent Cancer Foundation.

A speaker’s panel held during the charity event highlighted some of the innovative research and community projects done with the funding raised for Prevent Cancer Foundation by Games Done Quick over the years.

In a report issued by the Prevent Cancer Research Foundation, T. Peter Kingham, MD, Director of Global Cancer Disparity Initiatives at the Memorial Sloan Kettering Cancer Center, explained how funding [from Prevent Cancer Foundation] was helping increase colorectal and breast cancer screening in Nigeria. Funding in 2019 allowed high-risk or symptomatic Nigerian women to be evaluated with a new hand-held portable device called the iBreast Exam. Funding in 2020 will be used to examine the accuracy and feasibility of a commonly used, inexpensive stool-based screening test to help develop colorectal cancer screening programs in Nigeria and perhaps the rest of Africa.

Nimmi Ramanujam, PhD, oversees the Center for Global Women’s Health Technologies at Duke University. Prevent Cancer Foundation funding awarded this year will be used to increase cervical cancer screening in Peru. The project implements an innovative model of health-care delivery that is community-based, relying on women empowering women to be active agents of change in their own health care. This model gives women privacy and agency over cervical cancer screening, allowing 98 out of every 100 women to complete care at home. 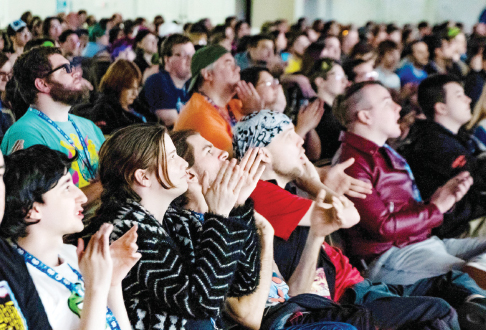 Attendees to the 2020 Awesome Games Done Quick event, held earlier in the year, where funds raised were donated to the Prevent Cancer Foundation.