Partial-breast irradiation delivered over 5 to 10 days did not meet noninferiority criteria compared with whole-breast irradiation given over 5 to 7 weeks, according to 10-year results of the large NRG (NSABP B-39/RTOG 0413) trial presented at the 2018 San Antonio Breast Cancer Symposium.1 However, the absolute 10-year cumulative difference in invasive breast tumor recurrence between the two treated groups was less than 1%, and the absolute cumulative difference in the relapse-free interval was 1.6%.

These small differences between treatments do not rule out a role for partial-breast irradiation for women after undergoing breast-conserving surgery.
— Frank A. Vicini, MD

Experts suggest that these results should not rule out adoption of partial-breast irradiation for patients with early-stage breast cancer who want to undergo breast-conserving surgery and desire a shortened radiotherapy option as per the 2016 American Society for Radiation Oncology (ASTRO) Guidelines.2

“Breast cancer is now increasingly diagnosed at early stages due to advances in screening and public awareness, and more than 100,000 women in the United States face treatment decisions about breast-conserving surgery. These small differences between treatments do not rule out a role for partial-breast irradiation for women after undergoing breast-conserving surgery,” said lead author Frank A. Vicini, MD, principal investigator and radiation oncologist at the MHP Radiation Oncology Institute/21st Century Oncology in Pontiac, Michigan.

“For patients, the most important endpoints are disease-free interval and disease-free survival, and recurrences matter. This is the largest trial to compare these techniques, and the differences in the recurrence-free interval and recurrences between the two arms (although statistically different) are small.” Dr. Vicini continued. “We need to consider that survival is the same with partial-breast and whole-breast irradiation, and there is a dramatic difference in treatment duration of 3 to 7 weeks down to 5 to 10 days. Quality of life is potentially better with partial-breast irradiation. My bias is that with modern radiation techniques, there would be even less of a difference in invasive breast tumor recurrence and relapse-free interval between the two arms.”

The NRG study enrolled 4,216 patients with ductal carcinoma in situ (DCIS), or stage I or II invasive breast cancer with 0 or 1 to 3 positive lymph nodes. Patients were randomly assigned to receive partial-breast irradiation prior to adjuvant chemotherapy (twice daily treatment with 3.4 to 3.85 Gy, totaling 10 treatments delivered over 5 to 10 days using 3-dimensional [3D] conformal external-beam radiation or brachytherapy) or whole-breast irradiation after adjuvant chemotherapy (twice daily treatment with 2 Gy of radiation, to a total of 50 Gy with a sequential boost to the surgical site given over 5 to 7 weeks).

The study enrolled both pre- and postmenopausal women with hormone receptor–positive or –negative tumors. Patients underwent lumpectomy, had histologically clear margins (ie, “no ink on the margin”), and no more than three positive lymph nodes. Patients were stratified prior to randomization for disease stage, menopausal status, hormone receptor status, and intent to receive chemotherapy.

Baseline characteristics were comparable between the two study arms. At baseline, median age was 54 years, 61% were postmenopausal, 25% had DCIS, 65% had invasive node-negative breast cancer, and 10% had positive lymph nodes. Systemic chemotherapy was used in 27%, and adjuvant hormonal therapy was used in about 83%.

The rates of grades 3 to 5 toxicities were slightly higher in the partial-breast irradiation arm but not significantly different. This was true for radiation-induced second cancers as well. In light of the worse cosmesis reported in the RAPID trial studying the same question, a discussion of potentially increased cosmetic risk with 3D conformal accelerated partial-breast irradiation is warranted during the consent process.

Speaking from the audience after the presentation, Steven E. Vogl, MD, a medical oncologist at Montefiore Medical Center, Bronx, New York, said: “You have convinced me that partial-breast irradiation is not much worse than whole-breast irradiation in terms of local control, local recurrence, and distant metastases. But without hearing long-term subjective patient-reported outcomes and cosmetic results, I don’t know what to tell my patients. You have to keep in mind that 97% of these patients will be free of distant 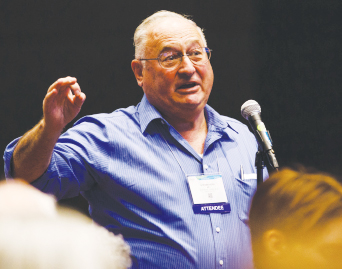 metastases at 10 years. Achieving a better cosmetic outcome and less breast pain and deformity, among those survivors doing well, is the whole point!”

Dr. Vicini replied, “Data on quality of life and cosmesis will be forthcoming. Stay tuned. In the future, we will look at quality of radiation—that is, how much of the breast was treated. That is an important issue.”

DISCLOSURE: The study was funded by the National Cancer Institute. Dr. Vicini is a research advisor for ImpediMed. Dr. Vogl reported no conflicts of interest.

At a press conference held during the 2018 San Antonio Breast Cancer Symposium, moderator Virginia Kaklamani, MD, said that partial-breast irradiation is underutilized in the United States for women with breast cancer. Dr. Kaklamani is Professor of Medicine at The...