The large phase III GAMMA-1 trial failed to replicate the encouraging findings from a previous smaller study of andecaliximab plus chemotherapy in untreated HER2-negative gastric or gastroesophageal junction adenocarcinoma, according to Manish A. Shah, MD, of Weill Cornell Medicine/New York Presbyterian, New York, who reported the results at the 2019 Gastrointestinal Cancers Symposium.1

“Disappointingly, we did not see improvement with andecaliximab,” Dr. Shah reported. However, the addition of the drug did seem to improve outcomes for a particular subgroup—patients 65 years of age and older. Thus, andecaliximab may still have potential in the treatment of this select population, Dr. Shah and other experts said.

Andecaliximab is a monoclonal antibody that inhibits matrix metalloproteinase 9 (MMP9), an extracellular enzyme involved in matrix remodeling, tumor growth, and metastasis and “a potentially important target,” Dr. Shah said. “Increased MMP9 expression is associated with poor prognosis across many malignancies, including gastric cancer…. Since

it has many effects on the tumor microenvironment, the hypothesis is that by giving andecaliximab with chemotherapy (and perhaps immunotherapy), we might be able to alter the microenvironment and hopefully increase antitumor effects of cytotoxic agents.”

In a previous phase I/Ib study in the first-line setting, added antitumor activity was shown when andecaliximab was combined with modified FOLFOX6 (leucovorin, fluorouracil [5-FU], oxaliplatin), producing a response rate of 50% and a median progression-free survival of 9.9 months.

“We were aggressive in our design and wanted to demonstrate a real improvement in benefit with andecaliximab. We hoped to improve overall survival from 11.5 months to 16.4 months, with a hazard ratio [HR] of 0.70,” Dr. Shah indicated.

There may be a subset of patients who will benefit [from andecaliximab], but we don’t yet have a great biomarker. This is the question we will address as we look at the data further.
— Manish A. Shah, MD

The combination therapy did improve response rates: 50.5% with andecaliximab/chemotherapy and 41.1% with chemotherapy alone, with complete responses achieved by 8.3% and 4.7% of patients, respectively (P = .049). However, the addition of the drug did not significantly improve either overall or progression-free survival, Dr. Shah reported. The median overall survival was 12.5 months in the andecaliximab arm and 11.8 months in the placebo arm (HR = 0.93; P = .56), and the median progression-free survival was 7.5 vs 7.1 months, respectively (HR = 0.84; P = .10).

The most common treatment-emergent adverse events were nausea, diarrhea, neutropenia, and fatigue. No meaningful differences between these toxicities were observed between the treatment arms.

“In our exploratory analyses, we were intrigued by this phenomenon of age. Age older than 65 seemed to be associated with improved benefit, both in progression-free and overall survival,” Dr. Shah reported.

The association with age was further confirmed by a sensitivity analysis, where, by quartiles, increasing age from youngest to oldest was associated with an increasing trend for benefit. “As you became older, your likelihood of benefit improved,” he said. This did not appear to be the result of other age-related factors. 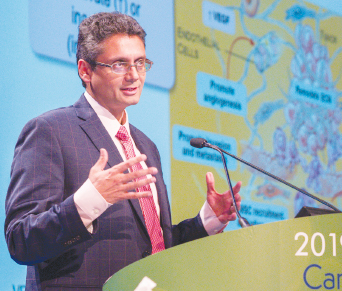 “GAMMA-1 was done in an unselected population, and we don’t know yet which group of patients is going to benefit from andecaliximab,” Dr. Shah commented. “There may be a subset of patients, if we could select them, who will benefit, but we don’t yet have a great biomarker. This is the question we will address as we look at the data further.”

In another phase II study presented at the meeting by Dr. Shah, andecaliximab was added to nivolumab in 144 patients with pretreated metastatic gastric or gastroesophageal junction adenocarcinoma. It did not improve response rates, progression-free survival, or overall survival vs nivolumab alone.2 In a correlative study, the investigators could not identify a gene signature or other tumor marker associated with response.3 ■

As invited discussant of the GAMMA-1 trial, Martine Extermann, MD, PhD, of Moffitt Cancer Center and Research Institute, Tampa, Florida, first commented on the “teaser” in the findings—the potential for benefit of andecaliximab in older patients. “The drug works...