The two-day event encouraged networking among CCF grant recipients and provided attendees the opportunity to learn from and interact with speakers on several career development topics.

The second day of the retreat gave the YIA and CDA recipients the opportunity to share their CCF-funded research with their peers through poster and oral presentations. It also featured career development talks by notable speakers.
Susan Lim, PhD, of the National Cancer Institute, gave an informative overview of the National Institutes of Health grant application process. 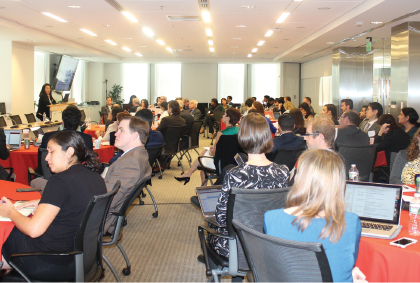 In an interactive panel discussion, Eduardo M. Sotomayor, MD, of George Washington University; ASCO President Daniel F. Hayes, MD, FACP, FASCO, of the University of Michigan; and Robert J. Mayer, MD, FASCO, of the Dana-Farber Cancer Institute, discussed the job application process, including how to negotiate a contract and secure a promotion.

Attendees also benefited from two breakout sessions conducted by David McFadden, MS, RPh, of ­Merck Research Laboratories, who discussed how to interact with pharmaceutical companies and industry, and Jeffrey Weber, MD, PhD, of New York University Perlmutter Cancer Center, who provided insight on how to successfully run a laboratory as a physician-scientist.

The keynote address was given by Allen S. Lichter, MD, FASCO, former ASCO Chief Executive Officer. In his inspiring and engaging talk, “Building a Career in Oncology,” Dr. Lichter discussed 11 principles he learned throughout his career, including the importance of networking, not being afraid to turn down a position, and “doing something that excites you.” ■