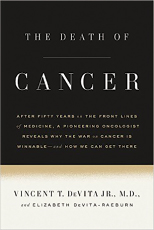 [W]e are not limited by the science; we are limited by our ability to make good use of the information and treatments we already have.

Title: The Death of Cancer: After Fifty Years on the Front Lines of Medicine, a Pioneering Oncologist Reveals Why the War on Cancer Is Winnable—and How We Can Get There

As a young boy, Vincent T. DeVita, Jr, MD was so enamored of the local iceman, a burly fellow known as Nunzi, that when a friend asked what he wanted to be when he grew up, Dr. DeVita said, “An iceman.” His mother, within earshot, quickly debunked that pipe dream, telling Dr. DeVita’s friend that her son only wants to be a doctor. According to Dr. DeVita, from that day on, whenever asked what he wanted to be, the answer was firm: a doctor. And as everyone in the oncology world knows, Dr. DeVita has left an indelible footprint on the science and practice of oncology.

His encyclopedic book, DeVita, Hellman, and Rosenberg’s Cancer: Principles and Practice of Oncology has for generations been the standard-bearer in oncologic reference literature. Now he has teamed up with his talented science-writer daughter, Elizabeth DeVita-Raeburn, to deliver a book on cancer for the lay public. The title, The Death of Cancer, boldly states the book’s ambition. And since cancer touches everybody’s life in one way or another, such a famous cancer doctor throwing down the gauntlet is sure to create a stir.

In his introduction, Dr. DeVita recalls a luncheon with James F. Holland, MD, during which he informed his longtime colleague and friend about his plans to write The Death of Cancer. Instead of the boisterous encouragement Dr. DeVita expected, Dr. Holland discouraged the project, saying, “The public doesn’t want to know these stories.” Dr. DeVita disagreed, feeling instead that the public, whose tax dollars funded the war on cancer, should know how their money was spent—and should also know what treatments are available and how to get them.

In the introduction’s final paragraph Dr. DeVita writes, “My message, ultimately, is simple: Don’t believe the cynics, the press, or the doubters. We are winning this war.… [W]e have the tools to eradicate cancer.… I will tell you how we can get there.”

Indeed, this is a positive, forward-looking book. But ultimately, it will be up to the readers—many of whom might have cancer or a loved one who does—to decide if The Death of Cancer delivers the goods.

The book is well written, breaking difficult scientific episodes into digestible narrative and twinning the science with gripping tales of cancer survival stories. The authors also explore the intrigue of the politics and behind-the-scenes infighting after President Nixon signed the National Cancer Act in 1971.

The book opens with one of those compelling stories, beginning with a phone call Dr. DeVita gets while grilling swordfish in his backyard. A cherished friend, with a high prostate-specific antigen level seeks advice. Ultimately, this friend is diagnosed with prostate cancer that has spread to the lymph nodes, and Dr. DeVita leads him on a remarkable saga of multiple treatments, some highly experimental. In the end, his friend, after many years of survivorship, succumbs to the disease.

Sad as it is, the opening chapter gives the reader a personal, eye-opening glimpse into the promise and frustration of today’s battle with cancer, eloquently setting the stage for the book’s core message: “I could have told you a story with a happy ending. I instead chose to tell you one that could have had a happy ending…. [W]e are not limited by the science; we are limited by our ability to make good use of the information and treatments we already have.”

A good deal of the book’s first half covers the historic backdrop of Dr. ­DeVita’s early days at the National Cancer Institute (NCI). Readers will be treated to candid anecdotes and introductions to the cancer luminaries who forged the way forward, like early explorers, into uncharted territory; the infighting, brutal working hours, towering egos, and daring experiments paid off with the development of lifesaving treatments and a foundation for future scientific inquiry.

To his credit, Dr. DeVita points out times when those in his own profession stymied that progress. He received a call from a distressed Bernard Fisher, MD, FACS. The publication of Dr. Fisher’s landmark study comparing mastectomy to lumpectomy was being unfairly stalled, which Dr. DeVita took exception with because the longer it was held up, the more women would go through unnecessary mastectomies. “Breast surgeons made their living doing radical or total mastectomies, and they did not want to hear that that was no longer necessary,” writes Dr. DeVita.

Fed Up With Naysayers

One of the many strengths of The Death of Cancer is that, unlike some recent books by cancer doctors, Dr. DeVita is never overly academic, and his sure-handed daughter uses language that is lively but not florid. Readers will enjoy the ride through cancer clinics and bureaucratic mazes. However, they will anxiously turn the pages in anticipation of the oncologic mother lode, which comes in chapter 10, aptly titled “The Death of Cancer.”

He begins by calling out three well-known journalists by name—writers who have penned pessimistic articles on our progress in cancer. “It has become a drumbeat in the media: we’re losing the war on cancer. These articles, and others like them, are wrong,” writes Dr. DeVita, clearly fed up with naysayers.

And he backs this up with some very impressive statistics illustrating a mortality decline since 1990 of 25%. But when you aggregate all the data, Dr. ­DeVita states, at least 68% of cancers are curable—a stat that seems to go missing in the mainstream press.

A prostate cancer survivor himself, Dr. DeVita frankly unlocks the private world of his battle with diagnosis and treatment. Speaking of his diagnosis, Dr. DeVita writes, “You might assume that with my background, and at this point in my career, I would know exactly what to do and whom to go to…. You might assume that I wouldn’t be bowled over by my diagnosis. But you would be wrong.” Dr. DeVita’s prostate cancer story is honest and illuminating, one of the best parts of this book.

As the book winds toward its final chapters, Dr. DeVita cranks up his message that we have brilliant, dedicated scientists, researchers, and clinicians. We have incredibly promising compounds in the pipeline. And he gives a thorough examination of those compounds. The central problem thwarting the progress that will ultimately cure cancers or turn them into treatable chronic conditions lies in a centralized drug trial and approval system that is irreparably broken and clogged with bureaucratic roadblocks.

Dr. DeVita calls this the “Frances Kelsey syndrome,” which started with events in 1960, when thousands of pregnant women in Europe were taking thalidomide for morning sickness. The tragic results in their babies are well known. However, before the drug’s effects were firmly established, Dr. Kelsey, a drug reviewer at the U.S. Food and Drug Administration (FDA), was leery and didn’t approve thalidomide, which turned out to be glaringly right. Nevertheless, as Dr. DeVita points out, that appropriate caution has metastasized into the FDA’s paranoia about approving new drugs and taking the kinds of risks many oncologists and their patients feel they deserve.

He offers a host of bold and doable solutions to this endemic cultural malaise. For example, “The NCI’s Cancer Centers Program should be able to operate the way it was originally designed to.… The FDA should delegate all authority for early clinical trials (phase I and II) to comprehensive cancer centers.”

The Death of Cancer is a finely conceived and written book. It is an important book, not only for the lay public but also for policymakers. It will not please those who remain pessimistic about the progress we’ve made and the way forward, as seen by Dr. DeVita. Others may have a better blueprint and can write their own books. But until then, The Death of Cancer offers our best plan to eliminate the scourge of cancer. At age 80, Dr. ­DeVita is an old cancer warrior, but the fire in his belly remains incandescent. ■