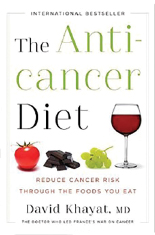 With little risk of getting it wrong, we may indeed claim that a good third of cancers are directly or indirectly linked to our diet.

In 2002, David Khayat, MD, was in Turkey on holiday with friends when he received a call from then French President Jacques Chirac. Dr. Khayat is one of France’s most prominent oncologists—a clinician, researcher, patient advocate, and policy insider. President Chirac interrupted Dr. Khayat’s holiday with an audacious request: He wanted Dr. Khayat to develop France’s War on Cancer plan, which would be President Chirac’s legacy. Dr. Khayat accepted the challenge, and history shows that his efforts in organizing a national cancer program were successful. Besides being an internationally recognized oncologist, Dr. Khayat is also a best-selling author.

Despite myriad studies on nutrition and cancer, the link between diet and cancer is still fraught with debate. However, according to Dr. Khayat, we can reduce cancer risk by eating the right foods. And he has presented an anticancer menu in his recently published book, The Anti-cancer Diet: Reduce Cancer Risk Through the Foods You Eat. Joining his own research with that of other major cancer specialists, Dr. Khayat breaks down what studies in this area mean, which ones provide the most solid evidence, and how to use the results in your diet. The result is a compelling argument for watching what you eat.

He stresses that the only discernible change in Japanese women’s lifestyle after being in the United States for a couple of generations is their eating habits This change in diet and the subsequent rise in cancer risk among this population are the core theoretical underpinning of The Anti-cancer Diet. Although not a new cause-and-effect theory, he postulates that the ‘Westernization’ of their diet—eating less fish, rice, fruit, and vegetables and more meat, fat, and refined sugar—is “without our being able to explain it definitively why they’ve dramatically increased the likelihood of developing a malignant breast tumor.” Dr. Khayat runs down similar diet-related regional cancer rates that bolster his argument.

The book begins with a thorough review of the global cancer crisis, replete with highly accessible graphs to give a visual to the dire reality of the cancer pandemic. Dr. Khayat’s primary response to the global cancer crisis is prevention, which is a common rationale among those in the oncology community who are involved in the geopolitical struggle to rein in cancer incidence and mortality. Readers looking to dive into the anticancer diet content will need a bit of patience while the author runs down the devastating consequences of tobacco, hormones, infectious agents, physical factors, and heredity.

The Link Between Cancer and Diet

Then he drops the bombshell: “With little risk of getting it wrong, we may indeed claim that a good third of cancers are directly or indirectly linked to our diet.”

That’s a heavy-duty statement, and readers of The ASCO Post will eagerly read on, to see whether the famous oncologist can back the claim up with solid data. “There are three major methods that allow us to get a handle on this sort of information [the postulate that a third of cancers are diet related]: epidemiological studies, experimental studies, and intervention studies on people.” However, constructing a causal relationship between external factors such as the environment or diet with specific diseases is fraught with multiple variables.

To his credit, Dr. Khayat points out the problems in epidemiologic studies that arise from unknown confounding factors. “This problem occurred recently in studies looking at the role wine plays in oral cancers. At the time the studies were carried out, nobody had any idea that most cancers of the mouth come from HPV [human papillomavirus]. As a result, since no researcher had checked out any of the case-control studies to see whether the two groups had equivalent oral-infection levels of HPV, these studies turned out to be unusable,” writes Dr. Khayat. After dissecting the data behind his book, he concludes, “Let’s allow common sense, along with the very best science, to guide us as we work our way through this book.”

To prep readers for the nitty-gritty of anticancer diet content, Dr. Khayat then drills into nutrigenomics and the effects of food biocompounds. This is a good foundation, but it will stupefy readers without a basic science background. First up in the diet is fish, thought by most to be a healthful choice over fatty beef or pork. Lovers of salmon and other delectable seafood beware. Dr. Khayat uses data from a study published in Science that might give salmon lovers pause. “The researchers analyzed 700 samples of farmed salmon and wild salmon, purchased in 40 different places around the world. They came to the same conclusion that the samples were so contaminated with dioxins and PCBs [polychlorinated biphenyls] that salmon should be eaten only occasionally, which would mean once or twice a month.”

Next up is meat, followed by dairy, sugar and sugar products, fruits and vegetables, and so on; each section has tables of good vs bad food choices. It can be an information overload at times and should be tackled in moderate chunks. The careful reader will question some of the rationale behind the recommendations and the way the author got there. “As a general rule, it is better to eat orange or orange-yellow fruit and vegetables in the morning, when their anti-oxidant properties can repair the damage from the night before.” The reasoning behind this and some other recommendations needed a bit more convincing data.

Along with sections on food, Dr. Khayat gives some very good commonsense advice on how lifestyle increases cancer risk.

The Anti-cancer Diet is an accomplished work by an author who has made a significant mark in the cancer world. And for a doctor of his standing, it is a bold effort to stray into the field of diet and health.

The book ends with an exhaustive anticancer advice section that could stand alone as a valuable booklet for the lay public. Translating from French to English has produced some clunky sentences, but that is a trifling complaint for a book that offers so much valuable advice and knowledge. The Anti-cancer Diet is highly recommended for readers of The ASCO Post. ■