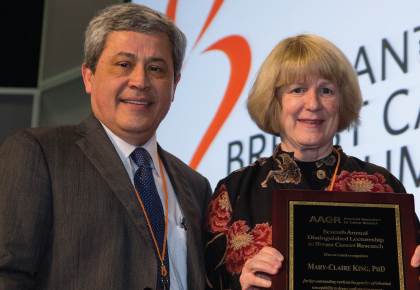 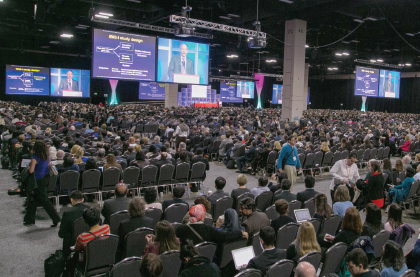 SABCS 2014—Over 7,500 physicians, researchers, patient advocates and health-care professionals from over 90 countries were in attendance at the meeting, which featured the latest research on breast cancer treatment and prevention. Photo Courtesy SABCS/©MedMeetingImages/Todd Buchanan 2014

Every breast cancer patient we identify after she develops cancer clearly represents a missed opportunity for prevention. Roughly 50% of patients who carry an unambiguously damaging mutation have no close family history.

It is not enough for Mary-Claire King, PhD, to have identified the germline BRCA1 mutation associated with hereditary breast and ovarian cancers. Her clinically applicable discovery is one of the world’s greatest in genetics and one for which she has been highly lauded.

But not one to rest on her laurels, Dr. King will not be satisfied, she says, until genetic screening for BRCA1 and BRCA2 is offered to all young women, regardless of family history of cancer. “To identify a woman as a carrier only after she develops cancer is a failure of cancer prevention,” she says.

Dr. King discussed her proposal at the 2014 San Antonio Breast Cancer Symposium, where she was honored with the American Association of Cancer Research Distinguished Lectureship in Breast Cancer Research. Dr. King is Professor of Medical Genetics and Genome Sciences at the University of Washington, Seattle.

“Here’s what an evolutionary biologist thinks we should do next about BRCA1 and BRCA2,” Dr. King began. “My proposal is that we offer population screening for unambiguously damaging mutations in these genes to all women at about age 30. In other words, we move beyond testing only women in severely affected families to testing women regardless of family history of breast or ovarian cancer—who can then undertake preventive action if they learn they carry a ­mutation.”

She offered a “profound” reason behind this proposal: “Every breast cancer patient we identify after she develops cancer clearly represents a missed opportunity for prevention.”

According to Dr. King, these missed opportunities are more common than one might think. “When we evaluated BRCA1 and BRCA2 in unselected breast cancer patients, at the time of their diagnoses, we found that roughly 50% of patients who carry a damaging mutation in BRCA1 or BRCA2 had no close family history of breast or ovarian cancer,” she indicated. This happened because 50% of women with mutations inherited them from their fathers, who were not affected, and familes were generally small.

Dr. King indicated that population-based screening meets the World Health Organization criteria: The disease is an important health problem in the target population, the risk of disease due to the mutation is high, mutations responsible for the disease can be accurately identified, and effective interventions exist.

Although the current official recommendation by the U.S. Preventive Services Task Force is that screening for unaffected women be limited to those with a family history of breast or ovarian cancer,1 new data make this conservative position questionable, she said, adding, “I agreed with that statement at the time it was made.”

The recent study coauthored by Dr. King, conducted in Israel and published in Proceedings of National Academy of Sciences, confirmed her experience with previous family-based studies: BRCA1- and BRCA2-associated risks are independent of family history, and population-based screening is the best way to find women whose mutations would otherwise remain undetected.

50% of Carriers Have No Family History

To determine cancer risks in BRCA1- and BRCA2-mutation carriers identified from the general population, the researchers conducted a study of population-based screening in the Ashkenazi Jewish population of Israel.2 Families were identified through the recruitment of more than 8,000 healthy men, who were screened for three loss-of-function mutations, which collectively account for most inherited risk due to BRCA1 and BRCA2 in this population.

“Men were tested as a gateway to families because men were unaffected by breast cancer themselves, thus enabling female mutation carriers to be identified only by relationship to a healthy male relative, not based on their personal or family history of cancer,” the authors explained.2

Genetic testing was offered to all female relatives of the 175 men with these mutations, and the female relatives with mutations were found to have very high cancer risks: 60% by age 60 for BRCA1 carriers and 33% for BRCA2 carriers. These risks were significantly higher at every age among women born more recently than among older women, a “birth cohort effect” seen in prior studies, and one that likely represents the increasing prevalence of nongenetic risk factors, such as early age at menarche and late age at first pregnancy.

Notably, 50% of the index males harboring mutations had no close family history of breast or ovarian cancer that would have triggered attention, Dr. King emphasized.

“In our view, this provided information to fill the gap that rightly concerned the Preventive Services Task Force. Women who carry a mutation in BRCA1 or BRCA2 are at high risk for breast or ovarian cancer, even if they are ascertained from the general population, regardless of their own personal or family history,” she emphasized.

More Details of the Proposal

Dr. King emphasized that screening should begin with BRCA1 and BRCA2, the two most well-characterized genes, and then perhaps evolve into broader screening once testing is in place. Variants of unknown significance would not be part of the reports.

“Our goal is to make the lives of oncologists more straightforward, not muddier. That means getting rid of the problem of “variants of unknown significance,”…which were invented in the course of commercial activity and have run amok since,… wreaking havoc for patients and despair for providers who need to give patients clear information,” she maintained.

She would form an expert panel to define a reference list of the thousands of different unambiguously damaging mutations in BRCA1 and BRCA2. These mutations can now be provided in a clear manner, with mutations identified in the future added later.

“No test in genetics picks up absolutely every damaging allele. Almost no regulatory mutations are yet detected, for example. We learn as we go along and add to the list of damaging mutations,” she said.

After screening for BRCA1 and BRCA2, she would refer two groups for genetic counseling and follow-up: patients with a damaging mutation in either gene and those lacking mutations but with a severe family history, as presently defined by federal guidelines, who would be candidates for genetic panel testing.

She believes age 30 (or thereabouts) is the appropriate age for such screening—at a routine visit to the gynecologist—because “this is the right age for women to begin to think of a 10-year plan along the lines of prevention, both through surveillance and consideration of prophylactic procedures.”

Population screening, she estimated, would identify a damaging BRCA1 or BRCA2 mutation in approximately 1 in 300 women. A conservative estimate is that 250,000 to 420,000 women would be affected, and their cancers preventable.

Although the prospect may sound daunting to health economists, its cost-effectiveness has been shown in a recent study from the United Kingdom.3 Compared with family history–based screening, population screening saved 0.090 more life-years and 0.101 more quality-adjusted life-years and was cost saving. It lowered the incidence of ovarian and breast cancers by 34% and 62%, respectively, and reduced treatment costs by £3.7 million (between $5 and $6 million).

“Based on UK parameters, the cost-effectiveness would be absolutely acceptable,” she indicated, adding the actual cost of testing is about one-tenth of the current commercial charge, and market forces will likely further bring down prices.

She concluded her talk with a somber prediction. “Everything I’ve said may soon be moot,” she suggested. “The provision of genetic testing directly to consumers, with U.S. Food and Drug Administration approval, without involving any of us, is imminent. I would like very much for us as geneticists and physicians who are working with patients to be involved in formulating testing and follow-up in a way that makes sense to us.” ■

Cancer Genetics: Looking Back, Looking Ahead

At the 2014 San Antonio Breast Cancer Symposium, The ASCO Post sat down with geneticist Mary-Claire King, PhD, for some personal musings about her career and how she might guide young researchers who want to follow in her footsteps. Dr. King is known for a variety of accomplishments in genetics,...