A Global Approach to Cancer Care 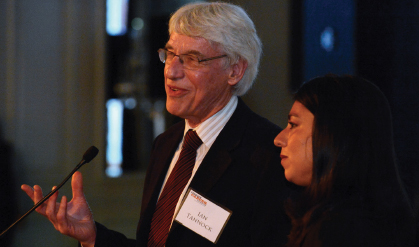 Ian F. Tannock, MD, PhD, DSc, FASCO, Professor of Medical Oncology at Princess Margaret Hospital and University of Toronto, has long been an advocate for ASCO as a truly global society and a leader in cancer care worldwide. It’s something he encouraged during his time on ASCO’s Board of Directors, and which he continues to reinforce as a volunteer and donor to the Conquer Cancer Foundation.

A truly global approach to cancer care is challenging given the enormous disparities in resources around the world. As Dr. Tannock frames it, “There is a huge difference in managing cancer in countries like the United States and Canada, most of Western Europe, Australia, and Japan and developing middle-income and lower-income countries. I think that ASCO, if it’s to be a world leader, is making good steps in that direction, but has to recognize that a 3-month gain in survival from a targeted agent that costs at least $5,000 a month is totally irrelevant to most of the world’s population.”

This year, in response to donor requests, the Conquer Cancer Foundation created a new giving option for donors to allow them to designate their gifts directly to the international initiatives the Foundation supports through its Grants & Awards program and ASCO International.

These programs attempt to thoughtfully address the disparities that Dr. Tannock describes, and range from direct research funding for investigators in low- and middle-income countries (the International Innovation Grant), to opportunities for ASCO member volunteers to travel overseas to help strengthen cancer care in low-resource countries, to training and mentoring opportunities like the Long-Term International Fellowship (LIFe) and the International Development and Education Award (IDEA).

The International Development and Education Award

The IDEA provides support for early-career oncologists in low- and middle-income countries to establish strong relationships with leading ASCO members who serve as scientific mentors to each recipient. The recipients of this award attend ASCO’s Annual Meeting and participate in a post-Meeting visit to their mentor’s institution in the United States or Canada.  Recipients also receive 3 years of complimentary ASCO membership, including a subscription to the Journal of Clinical Oncology.

Dr. Tannock has been involved in the IDEA Program as a volunteer mentor from the very beginning. “I’ve been a mentor in the IDEA Program since its inception—I think every year but one. Some of those people have come back to work with me or with others as fellows, so it’s been a very productive program,” he said. As an example of this, he cited one particular IDEA recipient whom he mentored, Rachel Riechelmann, MD, PhD, of the Instituto do Estado de Sao Paulo, Brazil, who found the IDEA to be a transformative experience for her life and career.

The IDEA program has produced substantial results over the past 11 years. There are currently 231 IDEA alumni from over 40 countries, many of whom have assumed leadership positions on ASCO committees and in their local societies; received fellowships and other research opportunities; pursued longer-term collaborations with their mentors; helped organize ASCO training and other activities in their countries; and, in some instances, created oncology societies where none previously existed. In addition, on average, each IDEA alumnus shares the information and new skills learned with more than 80 colleagues in his or her home country.

Dr. Tannock reported that he has developed continuing collaborations with several of his IDEA mentees. Next year he plans to travel to Vietnam to spend a few days teaching with a former mentee in Hanoi.

Another of ASCO’s international programs that Dr. Tannock would like to see grow is the International Cancer Corps, which, in collaboration with Health Volunteers Overseas, provides an opportunity to strengthen cancer care in medical centers in low-resource countries. By volunteering for the International Cancer Corps, oncology professionals can share their medical expertise and build long-term, supportive relationships with the clinicians who provide cancer care in these countries.

Health Volunteers Overseas pairs eligible oncology professionals with a medical center where the training needs of the facility match the expertise of the volunteer. Volunteers spend 1 to 4 weeks onsite, where they teach and train staff, residents, and students, and gain insight into the center’s cancer management needs and challenges. The International Cancer Corps has now expanded to five countries, with training sites in Paraguay, Bhutan, Costa Rica, Honduras, and Vietnam.

Making a Difference Worldwide Through Philanthropy

As a long-time member of the faculty at the ASCO Annual Meeting, Dr. Tannock had previously declined his honoraria payments so that the funds would remit to support the Conquer Cancer Foundation. When ASCO changed its policy to no longer offer speaker honoraria, Dr. Tannock decided to continue to support the Foundation with a direct donation to its International Programs. As he put it, “When ASCO stopped paying honorarium I thought, well, I can afford to give a few hundred dollars each year to support these programs, and I’m happy to continue to do that.”

To learn more about these programs and support them with a donation to the Conquer Cancer Foundation, please visit www.conquercancerfoundation.org/global. To volunteer to act as a mentor in the IDEA program or to learn more about any of the ASCO International programs supported through the Foundation, please email grants@conquercancerfoundation.org. ■

You can see a video of Dr. Riechelmann describing her experience with the IDEA program here.