I Don’t Know Why I Got Young-Onset Colorectal Cancer

I do not have any genetic link to the disease or any known risk factors. Cancer just happened.

By Diego Davis-Olegário, as told to Jo Cavallo
December 25, 2021

Throughout my adolescence and early adulthood, I had been plagued with digestive issues, including bouts of gastritis and constipation, which seemed normal for me and wasn’t too concerning. But by the time I turned 30, in 2015, the acid reflux I had been experiencing became so frequent and uncomfortable, I decided to see my primary care physician. After examining me, he said what I was experiencing was normal and prescribed antacids. Despite his reassurance that I was fine, I couldn’t shake the feeling that everything was not fine, and I decided to see a gastroenterologist for an additional workup. 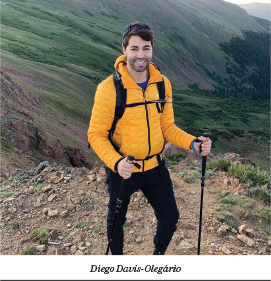 I underwent an endoscopy and colonoscopy; when I awoke from the procedures, the physician said she had found and removed two polyps from my colon. I asked her to explain what polyps were, and she said that although it was normal to find colon polyps in adults older than age 50, they were not common in people my age. During the whole conversation, she never mentioned that polyps could be dangerous or become malignant. She just said I would have the results from a biopsy of the polyps in 2 weeks and to have the test again in 5 years.

The pathology report stated that one of the polyps tested was at high risk of becoming cancerous. Still, the recommendation was another colonoscopy in 5 years. I thought, well, the polyp was removed, and now I don’t have anything more to worry about. I believed that I was fine.

However, 2 years later, I became extremely fatigued and began noticing blood in my stool. At first, I wasn’t too concerned about the bloody stools because I have had hemorrhoids that occasionally bled. But I didn’t ignore the symptoms. I made an appointment with my primary care physician for a checkup. And, again, he reassured me that everything was fine. Even with my history of colon polyps, he never referred me to a gastroenterologist for an additional examination. And, once more, I left his office feeling uneasy about my health.

Given 2 Years to Live

After another few months went by and the bleeding continued, I decided to find another gastroenterologist to make sure I didn’t have a serious problem. After giving me a physical examination and confirming that I did, in fact, have internal hemorrhoids, which were probably the source of the bleeding, because I had a history of colorectal polyps, he suggested I have another colonoscopy.

When I woke up from the anesthesia, the doctor told me that he found a tumor and, based on his experience, it was malignant and most likely early-stage colorectal cancer. The news was devastating. I had heard about breast cancer, but I had never heard of colorectal cancer and knew nothing about the disease. Still, I held onto the fact that if this was cancer, it was probably early stage, and I would be cured.

However, after the surgery, I learned the cancer was actually stage III. My oncologist recommended additional surgery to remove part of my rectum, followed by eight cycles of capecitabine plus oxaliplatin, which put me in remission for 9 months. I was hoping for a cure, but an imaging scan showed the cancer had already spread to my lungs and to a peritoneal lymph node. I now had stage IV colorectal cancer. My oncologist said it was very unlikely I would be cured and I probably had 2 years to live. I was just 33 years old.

I sought the opinion of another oncologist, who said he would biopsy the tumor and send the tissue for sequencing to determine the best treatment for me. The goal, he said, was to reach clinical remission. They were the first encouraging words I had heard in months, and I hung onto the hope that if the cancer couldn’t be cured, it would at least become manageable.

Because the tumor did not have any targetable mutations, my oncologist recommended a combination of leucovorin calcium, fluorouracil, and irinotecan (FOLFIRI) and cetuximab. An imaging scan 3 months after starting treatment showed no evidence of cancer. Three years later, I remain on maintenance FOLFIRI and cetuximab, and periodic scans continue to show no evidence of disease.

When I first learned I had metastatic colorectal cancer I wasn’t sure how to move forward in my life. How do you make plans for the future when you don’t know how long that future might last? To better understand my own experience with young-onset colorectal cancer and to help other young adults diagnosed with the disease, I became involved with Fight Colorectal Cancer (https://fightcolorectalcancer.org) and served as an ambassador from 2019 to 2020.

The experience was life-changing. In addition to helping me cope with metastatic disease, working with the colorectal cancer community gave me a chance to raise awareness about this disease, especially in young adults. I’m a well-informed person, yet until my diagnosis, I had never heard of colorectal cancer. Young people have to be made aware of this cancer and recognize the symptoms when they appear. They also have to learn to be proactive in their care, so they don’t have delays in diagnosis and treatment and can have a better shot at being cured.

I was lulled into a false sense of complacency by physicians telling me I was too young for cancer. I don’t want anyone else to have to learn the hard way that cancer does not discriminate by age, gender, race, or socioeconomic background. I don’t know why I got cancer. I do not have any genetic link to the disease or any known risk factors. Cancer just happened.

Looking Toward the Future

I am not naive. I’ve learned enough about colorectal cancer to know what a challenging disease it is, especially in a young person. But I refuse to be consumed by thoughts of cancer and to let it derail my future plans. Despite all that I’ve endured, I still think I can live a full and long life. That is my goal.