This third annual survey provides a revealing look at the general public’s attitudes and misunderstandings of cancer care in America.

As in the previous 2 years, the results from ASCO’s 2019 Cancer Opinion Survey revealed some startling answers about the public’s understanding of cancer, its risk factors, and strategies to prevent the disease. Although a majority of Americans (57%) said they were concerned about developing cancer, only 1 in 4 takes steps to incorporate cancer prevention into their daily lives, with another quarter reporting, “there is nothing you can do to prevent cancer,” according to the survey’s findings.1

Although large majorities of respondents cited smoking (81%), family history (69%), and sun exposure (63%) as major risk factors in cancer development, 36% recognized obesity—a known contributor to the development of 13 types of cancer2—or alcohol (31%) as cancer risk factors, with 2 in 3 respondents reporting they do not know what sources to trust or what to believe about the causes of cancer. Also disturbing is the finding that 1 in 5 respondents has never discussed their cancer risk with their physician, and 24% said they searched the Internet for ways to reduce their cancer risk. Nearly a quarter (21%) of young adults between the ages of 18 and 22 said they “thought they had cancer based solely on information I found online (rather than being diagnosed by a doctor).”

The survey polled 4,001 adults in the general population. Of these respondents, 1,009 have or have had cancer. The survey was published in September 2019, and additional survey results were released on October 30, 2019.

“Every time we do this survey, we recognize that there are a lot of misperceptions and misunderstandings about cancer in the general public. It is important for us to know what their understanding is about cancer because many in the general population are patients with cancer or will be caregivers for patients with cancer. Everyone is at risk for getting cancer, so it is good for us to get a handle on what the general public understands and doesn’t understand about cancer risk and prevention,” said Richard L. Schilsky, MD, FACP, FSCT, FASCO, Senior Vice President and Chief Medical Officer of ASCO.

“One-quarter of Americans have a fatalistic view that nothing can be done to prevent cancer, so why even bother to try? And that, of course, is a major misperception because we know that there are many things people can do to reduce their risk of getting cancer,” Dr. Schilsky continued. “Most survey respondents are aware of the importance of not using tobacco, maintaining a healthy weight, and reducing their sun exposure. However, when we looked at some of the misunderstandings in the results, 36% didn’t recognize obesity and 31% didn’t recognize alcohol as risk factors. So there is still a lot of public education that needs to be done about the risk factors for cancer, because many of those factors are modifiable.”

For the first time since its inception, this year’s ASCO survey delved into Americans’ use of e-cigarettes and their perceptions on the safety of the products, with some disturbing results. While 7 in 10 respondents agreed that e-cigarettes cause cancer, about 1 in 5 said e-cigarettes are not addictive or dangerous, with younger adults more likely to believe that vaping is harmless.

These findings are particularly alarming coming on the heels of results from the 2019 National Youth Tobacco Survey, conducted by the U.S. Food and Drug Administration (FDA) and the Centers for Disease Control and Prevention. For that survey, more than 5 million middle and high school students reported using e-cigarettes in the past 30 days, and nearly 1 million reported daily use. According to the National Youth Tobacco Survey, although cigarette smoking is at an all-time low among high school students, increases in e-cigarette use have reversed the progress made in the decline of overall youth tobacco use.3

Also disturbing in ASCO’s Cancer Opinion Survey is the finding that nearly 3 in 10 young adults believe that flavored e-cigarettes are less damaging to a person’s health than unflavored products—this despite warnings from the U.S. Surgeon General that in addition to nicotine, e-cigarettes contain other harmful ingredients, including the flavorant diacetyl, a chemical linked to serious lung disease.4

“The concern is that vaping is a gateway to tobacco use, because vaping produces nicotine addiction,” said Dr. Schilsky. “Vaping is the inhalation of a vaporized form of nicotine, so it delivers pure nicotine into the lungs. I wouldn’t say at this point that we know conclusively that there is a clear relationship between vaping and cancer, but there has not been long enough follow-up because vaping is a relatively new phenomenon and we don’t know what cancers are going to emerge 20 or 30 years from now.” 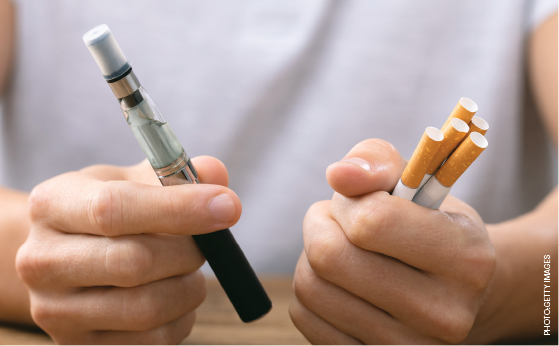 He added, “To proponents of vaping who argue that e-cigarettes should be used for tobacco cessation, our view is, if you want to propose vaping nicotine products as a tobacco cessation strategy, you should do the prospective clinical trials to prove the utility of those products as a tobacco-cessation aid. The products should then be approved by the FDA and labeled for that purpose. Until then, they shouldn’t be used in that way.”

In 2015, ASCO and the American Association for Cancer Research (AACR) published a joint policy paper recommending specific steps to regulate electronic nicotine delivery system products to minimize the potential health consequences of their use. The statement acknowledged that e-cigarettes may be beneficial if they reduce smoking rates or prevent or reduce the known adverse health effects of smoking. However, they may also be harmful, especially to adolescents and teenagers, if they increase the likelihood that users will transfer to combustible tobacco products or if they discourage smokers from quitting.5

Earlier this year, the Trump Administration signaled its intention to ban the sale of most flavored e-cigarettes in response to the rise in vaping among young people. However, a clear policy on a potential ban or regulation on these products has not yet emerged from the Administration.

“We have stated in public documents that ASCO is opposed to the marketing and sale of flavored nicotine products to young people,” said Dr. Schilsky. “We supported the initial call to ban these products, and we’re disappointed by the Administration’s apparent reversal on such a ban. There is no reason to sell flavored nicotine vaping products. Even if you wanted to promote the notion that they can be used as a tobacco-cessation aid, these products should be targeted toward an older population; if people are using it as a medicinal product, they don’t need it to be flavored. The only possible reason to sell these products and market them to young people is to get an uptick in their use, which is exactly what we don’t want.”

Also for the first time this year, ASCO survey respondents were asked about their thoughts on end-of-life care, and again, the results were startling. Despite a huge majority of respondents (91%) agreeing that it is important for physicians and patients to take the time to discuss end-of-life care and that it is important to communicate those wishes to their doctor (89%), only 53% said they have thought about the care they would like to receive at the end of their life. Among those, 25% have not communicated their wishes to anyone, and just 20% communicated their wishes to their doctor. Even among cancer survivors, just 26% said they had ever discussed end-of-life care with their physicians.

With so many staying silent on the care they would like to receive at the end of their life, it is not surprising that 1 in 5 caregivers in the survey said they did not feel prepared to make decisions about their loved one’s end-of-life wishes. Moreover, 70% said they wished they had more information to help prepare them and their loved one for impending death. Another clear majority (66%) admitted that “Managing end-of-life care for my loved one is/was harder than I thought it would be.”

“The fact that people seem to recognize the importance of having these discussions with their physician or caregiver but nevertheless do not have them is very distressing to me,” said Dr. Schilsky. “Having had many such discussions with patients over my career, I know how difficult they are for both the physician and the patient. But why patients aren’t having a discussion about their end-of-life wishes with their caregivers and family members is puzzling to me. It is a very revealing finding in the survey, and now we have to figure out how to get people comfortable with the idea of having these important conversations.”

Again this year, the cost of cancer care was front and center, with nearly 7 in 10 cancer survivors and their caregivers saying that the financial cost of cancer causes anxiety. In fact, 12% of survivors and 15% of caregivers, respectively, admitted that the anxiety was overwhelming. With the cost of care generating such consternation among a majority of respondents, it is not surprising that nearly 9 in 10 agreed that the government should regulate the price of cancer therapies. Nearly the same number said that Medicare should be allowed to negotiate drug prices directly with pharmaceutical companies and that the FDA should speed up approvals of generic versions of costly cancer treatments.

The concern is that vaping is a gateway to tobacco use, because vaping produces nicotine addiction.
— Richard L. Schilsky, MD, FACP, FSCT, FASCO

“Although these findings aren’t new in our survey, they reflect the fact that so many cancer survivors and their caregivers continue to worry about having to deal with the issue of the cost of cancer care,” said Dr. Schilsky. “In many cases, caregivers are the ones left talking with insurance companies, trying to understand the patient’s bills, as well as trying to muster the financial resources to pay for that care. It is a difficult situation.”

Ensuring High-Quality Care for All

Tracking the public’s attitudes on cancer care over time through ASCO’s annual Cancer Opinion Survey provides a critical lens on what the public, including patients with cancer, expect and need from the nation’s cancer care system and the changes they would like to see incorporated into that system, according to Dr. Schilsky.

“Doing this survey every year uncovers many of the attitudes, misunderstandings, and misperceptions the public has about cancer and its treatment, which ultimately may influence the way people seek out care or the way in which they interact with their physicians—all of which could potentially have an impact on the outcome that patients’ experience. Having this information helps ASCO define its role in how best to correct these misunderstandings and ensure high-quality cancer care for every patient,” said Dr. Schilsky.■

DISCLOSURE: Dr. Schilsky has received institutional research funding from AstraZeneca, Bayer, Boehringer Ingelheim, Bristol-Myers Squibb, Genentech/Roche, Lilly, Merck, and Pfizer; and has been reimbursed for travel, accommodations, or other expenses by Varian.