In patients with HER2-positive early breast cancer and residual disease after neoadjuvant chemotherapy, adjuvant treatment with trastuzumab emtansine (T-DM1; Kadcyla) reduced the risk of invasive disease by 50% over trastuzumab (Herceptin).1 The phase III KATHERINE study was presented at the 2018 San Antonio Breast Cancer Symposium and published concurrently in The New England Journal of Medicine.2 Experts say these findings will change the standard of care.

After receiving neoadjuvant therapy with taxane-based chemotherapy plus trastuzumab, patients with residual disease were randomly assigned to continue trastuzumab or be switched to T-DM1. The hazard ratio (HR) was 0.50 favoring T-DM1, and this corresponded with an absolute improvement in 3-year invasive disease–free survival of 11.3 percentage points. The invasive disease–free survival rate was 77.0% with trastuzumab, rising to 88.3% with T-DM1.

“With T-DM1, we saw a remarkable reduction in the risk of developing an invasive disease–free survival event,” said Charles E. Geyer, Jr, MD, Professor of Medicine at Virginia Commonwealth University School of Medicine and the Harrigan, Haw, Luck Families Chair in Cancer Research at Massey Cancer Center, Richmond, Virginia. “I believe these results will be practice-changing. The results should form the foundation of a new standard of care in patients with invasive breast cancer following neoadjuvant therapy.”

The study was met with enthusiasm at the symposium, where breast cancer experts heralded the significance of the findings. “The findings of KATHERINE were impressive,” said Harold Burstein, MD, PhD, Professor of Medicine at Dana-Farber Cancer Institute, Boston. “The tendency is to give dual-antibody therapy if there is residual disease. T-DM1 will replace that. I think this is a practice-defining study.”

Patients with HER2-positive early breast cancer receiving neoadjuvant therapy have a favorable long-term prognosis if they achieve a pathologic complete response. Residual cancer in the surgical specimen heralds a higher risk of recurrence, and the best treatment strategy in this setting is unknown. KATHERINE aimed to

determine whether treating these patients with the antibody-drug conjugate T-DM1 instead of standard trastuzumab would reduce the risk of recurrence without an unacceptable increase in toxicity.

T-DM1 is currently approved by the U.S. Food and Drug Administration (FDA) for metastatic HER2-positive breast cancer following previous treatment with trastuzumab and a taxane. The current findings will add to the FDA’s consideration of T-DM1 for the adjuvant setting, Dr. Geyer said.

KATHERINE was an open-label study of 1,486 patients with HER2-positive early breast cancer treated with neoadjuvant chemotherapy that included a taxane and trastuzumab, followed by surgery. Patients could have received an anthracycline and alkylating agent; 18% also received pertuzumab (Perjeta). 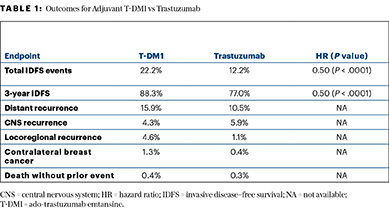 The statistical design assumed an -improvement of 25% with T-DM1. The efficacy stopping boundary for the single, prespecified boundary for early reporting was a hazard ratio less than 0.732. Following review of the interim analysis, the data and safety monitoring board recommended full analysis and releasing the results.

Analysis by subgroup demonstrated striking homogeneity of benefit across all the key subgroups, which is one of the remarkable findings of the study.
— Charles E. Geyer, Jr, MD

“Analysis by subgroup demonstrated striking homogeneity of benefit across all the key subgroups, which is one of the remarkable findings of the study,” Dr. Geyer said. The only group showing heterogeneity was central HER2 status by immunohistochemistry, in which the hazard ratio was 0.43 for the 3+ cohort and 0.83 for the 2+ cohort.

Secondary endpoints of disease-free survival and distant recurrence–free interval also indicated a meaningful reduction in first events with T-DM1 (Table 1). The overall survival analysis is immature with 98 deaths, but there have been 56 deaths with trastuzumab and 42 with T-DM1 (HR = 0.70; P = .0848).

The safety profile of T-DM1 was as expected from the use of the drug in metastatic disease. Adverse events mainly included more frequent drops in platelet count and increases in sensory neuropathy and liver enzymes, compared with trastuzumab, though these effects were mostly mild. Fatigue and nausea were also greater with T-DM1 but were generally manageable and reversible, Dr. Geyer said.

Grade ≥ 3 adverse events were observed in 15.4% of the trastuzumab arm and 25.7% of the T-DM1 arm, and those events leading to treatment discontinuation were seen in 2.1% and 18.0%, respectively. Grade ≥ 3 toxicities with T-DM1 included decreased platelet count (6%) and occurrence of sensory neuropathy (2%). Regarding the latter, Dr. Geyer noted that sensory neuropathy increased overall from 7% with trastuzumab to 19% with T-DM1; however, 65% of the 19% were grade 1 events, “and as we follow patients, we are seeing substantial reversibility,” Dr. Geyer noted.

A potential limitation of the KATHERINE study, according to Dr. Geyer, was the decision to preferentially perform central confirmation of positive HER2 status on the pretreatment core biopsy of the primary tumor rather than the residual tumor. “Paired specimens from over two-thirds of patients have been collected, and further analyses to define the rate of HER2 loss after surgery and the activity of T-DM1 in these patients are planned,” he said. “The paired specimens will also facilitate further analyses to define potential resistance mechanisms to neoadjuvant chemotherapy and trastuzumab, as well as adjuvant T-DM1.”

Asked whether trastuzumab alone is the best comparator (since clinicians often use adjuvant trastuzumab combined with pertuzumab in patients who were treated preoperatively with this regimen), Dr. Geyer told The ASCO Post: “This study did not address that specific question, but the fact is that T-DM1 produced a 50% reduction in hazard ratio vs trastuzumab, and it’s very unlikely that the addition of pertuzumab to trastuzumab could have resulted in that much benefit in a group of patients with residual disease following neoadjuvant therapy with the dual antibodies.” ■

Commenting on the findings of the KATHERINE trial were Eric P. Winer, MD, Director of the Breast Oncology Program in the Susan F. Smith Center for Women’s Cancers at Dana-Farber Cancer Institute and the Thompson Senior Investigator in Breast Cancer...