In the not-so-distant past, clinical trials were considered an option only for the young and fit. Enrolling older people “used to be thought unethical,” said Janet Woodcock, MD, Director of the U.S. Food and Drug Administration (FDA)’s Center for Drug Evaluation and Research (CDER), as she opened the 2017 FDA-ASCO Geriatric Oncology Workshop.

“We’ve gotten beyond that,” she added.

The reasons for the changing outlook have largely to do with demographics. About 60% of cancer patients in the United States are aged 65 years and older, and that proportion is growing steadily. But the body of evidence used to guide their treatment is much more limited than that for younger patients.

That reality has brought increasing national attention to the issue in recent years, said Harpreet Singh, MD, the FDA’s Scientific Liaison for Cancer in Older Adults, who co-chaired the workshop along with Laura Levit, JD, ASCO’s Associate Director of Policy; Arti Hurria, MD, who heads City of Hope’s Center on Cancer and Aging, Duarte, California; and Heidi D. Klepin, MD, a geriatric oncologist and Associate Professor at Wake Forest School of Medicine, Winston-Salem, North Carolina. An FDA guidance for industry in 2012, a report from the Institute of Medicine in 2013, and recommendations from ASCO in 2015 have addressed the issue. At the 2017 ASCO Annual Meeting, several abstracts focused on ways to broaden the evidence base for treating older adults.

“It’s a multifaceted and complex problem and calls for a multifaceted and complex solution,” said Dr. Hurria. In the talks and panels that followed, stakeholders from diverse settings—clinical, academic, pharmaceutical, regulatory, and patient advocacy—explored potential solutions. They included strategies to increase enrollment of older patients in trials, innovative trial designs, and the use of observational and real-world data to complement clinical trial data.

The basic barrier to clinical trial enrollment for many older people is the result of eligibility criteria. Trial participants “are the Olympic athletes,” noted Richard L. Schilsky, MD, FACP, -FASCO, ASCO’s Senior Vice President and Chief Medical Officer. “We need to broaden the criteria to let nonathletes into trials.”

[Trial participants] are the Olympic athletes. We need to broaden the criteria to let nonathletes into trials.
— Richard L. Schilsky, MD, FACP, FASCO

It is not only that trials have age cutoffs for participation. They also have performance and functional standards that can rule out many older patients. ASCO and the Friends of Cancer Research, with the FDA, have developed recommendations for more inclusive eligibility criteria, said Lou Fehrenbacher, MD, Medical Director of Kaiser Permanente Oncology Clinical Trials, Vallejo, California. The recommendations call for inclusion in trials of patients with prior or concurrent malignancies. They also address functional standards, noting, for instance, that mild renal impairment is common and should not preclude participation in trials.

Geographic barriers are also important, noted Mihaela -Popa‑Mckiver of Bristol-Myers Squibb. She pointed out that 50% of U.S. oncologists are concentrated in eight states. “Where we run our studies matters and depends on where oncology practices are located,” she said.

Other barriers to participation are less tangible. Biases exist among both physicians and patients, noted Worta McCaskill Stevens, MD, Chief of the Community Oncology and Prevention Trials Research Group at the National Cancer Institute (NCI). “We need a culture change,” she said.

Among physicians, there can be an assumption that older patients are not interested or able to enroll in trials. Harvey Jay -Cohen, MD, who leads the Center for the Study of Aging and Human Development at Duke University School of Medicine, Durham, North Carolina, pointed to a study showing that older people have about the same attitudes toward trials as younger patients. But it also found that physicians often did not broach the subject with their older patients.

Dr. Schilsky noted that clinicians face risks when enrolling older patients because of the higher chance of adverse events and protocol violations. “We need to de-risk the process,” he said. 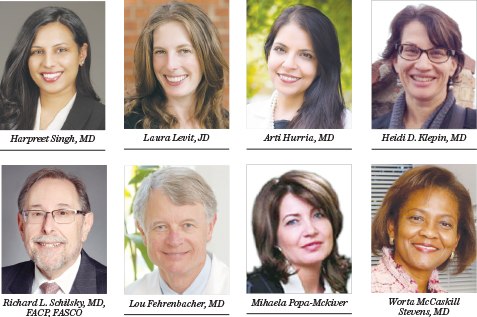 To recruit participants, communication strategies make a difference, said the NCI’s Iman Martin, PhD, MPH, MSc, also with the Community Oncology and Prevention Trials Research Group. She emphasized that when designing trials, it is important to have at the table those who know how to reach different social and demographic groups.

To recruit older patients specifically, it helps to understand their special needs and priorities, said Beverly Canin, a patient advocate with Breast Cancer Action. For instance, maintaining functional abilities may be more important to an older patient than other outcome measures. Low toxicity may be more important than efficacy. She and others noted that altruism can be a strong motivator.

Discussion also focused on modifications to the traditional randomized controlled trial design that could ease participation by older patients. Supriya G. Mohile, MD, who heads the Geriatric Oncology Clinic at the University of Rochester Medical School, New York, described a potential “extended trial” design, in which a cohort of older patients could be added to the successful treatment arm of a randomized controlled trial after the randomized phase was complete.

Another proposed trial design, incorporating “composite endpoints,” is under discussion in Europe, said Hans Wildiers, MD, Clinical Director of the Breast Centre at University Hospitals Leuven, Belgium. In this design, several outcomes are combined in a measure of “overall therapeutic utility.” Component measures could include, for instance, benefits and toxicities from the patient’s perspective plus benefits and toxicities from the clinician’s perspective.

Panelist Julia Beaver, MD, Director for the FDA’s Division of Oncology Products 1, part of CDER, welcomed these ideas. “The FDA is “open to hearing more innovative trial designs and endpoints,” she said.

A third major effort to broaden the evidence base for older patients is to expand and improve the use of observational data. Observational research is critical as a source of real-world evidence to complement clinical trial data, said Gary H. Lyman, MD, MPH, FASCO, Co-Director of the Hutchinson Institute for Cancer Outcomes Research, Seattle, who discussed ASCO’s recent recommendations for enhancing the role of observational data.

Two of the five recommendations call for improving the quality, interoperability, and exchange of electronic health records, which are a growing source of real-world evidence. For example, electronic health records are the basis for CancerLinQ®, ASCO’s cloud-based database, which aggregates these data from multiple practices. Robert Miller, MD, FACP, FASCO, Vice President and Medical Director for CancerLinQ, reported that the project had so far signed on more than 100 practices and 2,500 oncologists who are contributing to the database and can access the aggregated, de-identified data to help make treatment decisions. With the recent launch of CancerLinQ Discovery, third parties may submit requests to use curated data sets. 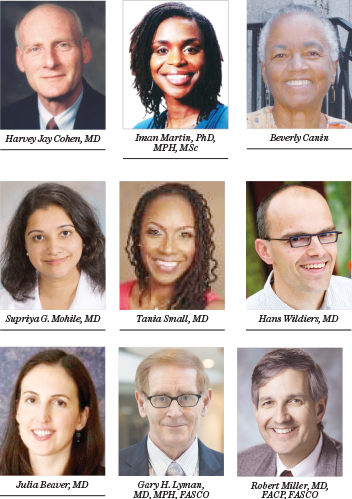 The growing importance of electronic health records has created interest in what more they could do. For instance, they do not now routinely capture the functional, social, and other factors that are collected on geriatric assessments and may influence outcomes. The workshop’s panel on real-world evidence concluded that a critical next step is to improve electronic health records with a “parsimonious list of structured data elements that are easily captured, including elements of the geriatric assessment, such as functional status, comorbidities, cognitive status, and social support.”